The Gulf of Mexico Oil Spill Will Echo in the Arctic 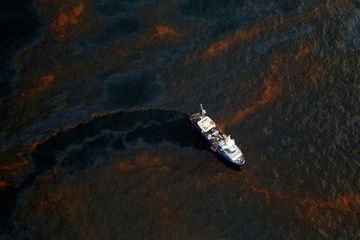 The environmental tragedy triggered by the explosion which sank the BP-owned Deepwater Horizon oil rig on April 20 in the Gulf of Mexico has been unfolding for four months. The blast killed 11 people who worked at the rig and caused damage to the underwater riser structure connecting it to the well located at the depth of 1.5 km, the result being the worst oil leak throughout the history of offshore drilling. Estimates show that 4.1 to 4.9 million barrels of oil ended up in the waters of the Gulf of Mexico.

At the moment BP is through with fitting a cement containment cap to the well and claims that oil is no longer flowing into the Gulf of Mexico where a cleanup operation is underway. Up to date the relief has cost BP over $6 bn and the total looming on the horizon tops $32 bn. British Petroleum – the transnational grand running operations in all parts of the world from Libya and Azerbaijan to Alaska – plans to offload assets worth $30 bn in Vietnam and Alaska and has already borrowed $2 bn from the Royal Bank of Scotland and Société Générale to offset the losses. Revenues generated by oil production at the Guneshli offshore oil field in Azerbaijan will be diverted to repay the loans.

Naturally, in the current circumstances BP cannot count on anybody's compassion. Notably, the scope of the environmental disaster is not limited to the Gulf of Mexico and its shores. Experts are concerned that the Gulf Stream can bring some of the the spilled oil as far as the shores of Norway. It would be just as sad if the contaminants proliferate all the way to Russia's northern city of Murmansk where the population is getting used to the abundance of the red king crab in the Barents Sea.

Quite a few politicians – US President B. Obama among them - would like the problems generated by the catastrophe in the Gulf of Mexico to seem less serious than they actually are. To encourage tourism, on August 14 Obama and his daughter Sasha went swimming at the Alligator Point in Panama City Beach, Florida. The choice of the show site was a bit cunning considering that the Alligator Point is located hundreds of miles away from the epicenter of the environmental disaster. Earlier – on August 9 – Obama stated that the relief operation was practically complete.

Obama's handling the crisis drew biting criticism. Great Britain's Guardian wrote that he failed to “give voice to what regular people are feeling in their bones” as R. Reagan or B. Clinton would have. He was slow to impose a ban on offshore drilling when the measure was expected across the US. Obama is yet to face additional consequences during the coming Senate elections on top of the facts that the Republicans are already capitalizing on the problems in Afghanistan, the Administration's inability to deal with the “Iranian nuclear problem”, and the weak economic policies of the Democrats.

Former Federal Reserve Chairman A. Greenspan made no discovery when he said the US has “a very distorted economy”. He explained that any recovery has mostly been limited to large banks, large businesses and “high-income individuals who have just had $800 billion added to their 401(k)s, and are spending it and are carrying what consumption there is, while the rest of the economy, small business, small banks, and a very significant amount of the labor force, which is in tragic unemployment, long term unemployment - that is pulling the economy apart. The average of those two is what we are looking at, but they are fundamentally two separate types of economy”.

Things are Worse Than Widely Believed

Scientists from Georgia State University say 80% of the oil spilled into the Gulf of Mexico have been skimmed. That may be more or less true concerning the oil that was on the water surface, but large oil-containing plumes remain underwater. Researchers from the University of South Florida hold that the plumes contribute most to the environmental damage, contaminating water and emitting toxic substances which pose a threat to aquatic ecosystems. USF microbiologist J. Paul says: “The dispersant is moving the oil down out of the surface and into the deeper waters, where it can affect phytoplankton and other marine life”.

Another group of US scientists issued an even grimmer assessment of the situation. They maintain that roughly 79% of the spilled oil is still underwater. Their estimate does not include the oil that has reached the shore since the amount would be hard to calculate, says Charles Hopkinson, a University of Georgia marine scientist. Commenting on Obama's statement that the relief operation is complete, Chemist Dana Wetzel said: “It’s like they were saying ‘the end’. I’d say we have just gotten through setting up the plot”.

The catastrophe in the Gulf of Mexico has had repercussions worldwide. On April 20, 2010, neither Chinese investors nor retired British citizens could possibly imagine what threat to their well-being they were about to face. Over the two months following the oil spill, the BP shares these people owned shed 48% of their value and state-run investment funds in China, Singapore, Kuwait, and Norway which had invested in BP lost a handsome $4 bn.

The global economic downturn is forcing the majority of European countries to perform amputations on their welfare systems, and now that BP is confronted with serious problems, pensions in Great Britain are particularly endangered. The cost of BP shares at the New York stock market dropped 57% over the first ten weeks following the disaster and the company's total worth went down from $190 bn to $95 bn. It should be taken into account that - on top of keeping some 10,000 British citizens employed - BP pays around $10.5 bn in taxes annually. As the amount will predictably shrink, the British government will have to seek greater financial austerity. The fact that BP is roughly 40%-owned by British shareholders gives an idea of the magnitude of the shock to be absorbed by the British economy. The dividends paid by BP make 1/7 of the total dividends paid in Great Britain and play the key role in keeping quite a few pension systems afloat. BP dividend payments had to be frozen against the backdrop of the plummeting cost of the company's shares, making the pension systems – and, consequently, the British pensioners – further tighten the belts. The British retired citizens stand to lose a lot in case BP goes under. London Mayor Boris Johnson opined that the BP crush would be Great Britain's “national problem”.

As the spill took place in the proximity of the US shore, BP had to take its responsibility for the catastrophe seriously and even sell a portion of its assets. A similar incident in the marine zone of a country run by a puppet regime on the corporation's payroll would not have put the company under nearly as much pressure.

Oil grands like BP, Exxon-Mobil, Chevron-Texaco, and Conoco-Phillips are increasingly tapping into offshore resources, and in the process their marine expansion breeds heightened risks to the environment. In the nearest future, the offshore drilling will largely relocate to the Arctic zone where no well-defined national borders exist and only energy sector champions are technologically equipped to operate. As a result of the Arctic-bound drift of the offshore drilling activity, in no time we are likely to see oil-stained polar bears and seals at Russia's northern frontiers.

Recently Germany's ARD TV channel suggested a curious explanation behind Brussel's unlimited determination to drag Iceland into the EU. It should be realized that Iceland has a lot to offer – once it joins in, the EU will expand into the Arctic zone which scientists believe to contain huge natural resources. Upon integrating Iceland the EU will include another Arctic country – Denmark being the first one - which is entitled to claim the Arctic mineral riches.