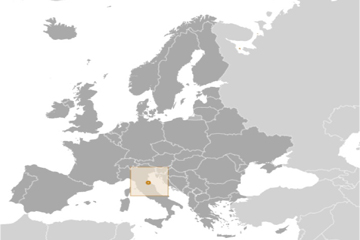 The purpose of this series of documentaries is to travel to the smallest countries of Europe, such as San Marino, Luxembourg, Monaco, Liechtenstein, Montenegro, Malta, and to discover those countries from the point of view of the biggest country in Europe and the world, Russia. This specific angle, with its humoristic and literary undertone, underlines automatically the contrasts, clichés and paradox that can exist between small and big countries (for example San Marino, a country of 61 km2 and 30 000 people, has two Heads of State!).

The series intend to look at the past (the legends and myths that surround the creation and shape the cultural heritage of the countries, the history of their sovereignty), the heritage (main historical buildings and sites, museums), the present (economy, lifestyle, gastronomy, artistic scene), and highlight the personalities who act on the ground. All those elements in the end contribute to shape your own image of the country and your feelings toward it (just as some of the most important pieces of literature and poetry, be it Dickens, James, Baudelaire, Benjamin, Pushkin, Mandelstam, Brodsky, Arkhmatova, were inspired by cities and their people).

The quality of this serie of documentaries is guaranteed by the experience and knowledge of the team as well as the collaboration of the local authorities and main actors that will guide us through “their” country.

The series follow an identical structure: the presenter is guided through the different thematic and places by different selected hosts he meets on the ground. Within this structure, we consider important to remain flexible and open, in order to welcome the unpredicted moments that are at the heart of documentaries, and that can be sometime far more interesting than what was expected and planned.

In heart of Italy, on the border between the Emilia Romagna and Marche Regions, the Republic of San Marino has an overall extension of just 61 square kms. It is the third smallest country in Europe, immediately after Monaco and Vatican City. The total length of its border with Italy is 39 km. It is not part of the European Union.

The climate is typically Mediterranean

San Marino is known for its financial services and bank secrecy, with a bank every six hundred inhabitants. 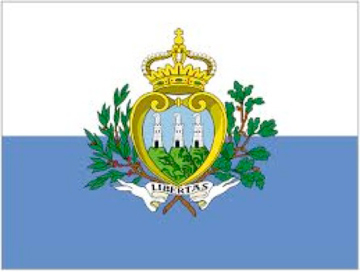 The Republic of San Marino is named after Saint Marinus, a stonecutter born in Lopar on island Rab, more than 17 centuries ago. According to legend, he left the island with his life friend Leon at his young age and went to another side of the Adriatic Sea, to the coast of the Apennine peninsula, in town Rimini. The two young man left the native island in order to find job. As both were diligent and virtuous, the Christian community there became very fond of them. However, he was persecuted because of his Christian sermons so he fled to the Mount Titano and built a small church, which soon became a gathering place for a small community of Christians anxious to escape the persecutions of emperor Diocletian, who found their new home and laws in it. That was the beginning of the today's city and the state of San Marino.

As with other countries, it is difficult to determine the difference between truth and legends that surround the creation of San Marino. What is certain is that they both equally influenced the destiny of San Marino, its international ties and its people.

In San Marino, the veneration of the Saint is extremely deep-rooted and widespread. When the authority of the Empire was waning and the temporal power of the Pope had not yet been established, the local population decided to give themselves some form of government. The small community on Mount Titano, in memory of the legendary figure of Marinus, called itself “Land of San Marino. The spirit, which inspired the ancient free city of San Marino, helped the community to overcome perilous situations and consolidate its independence. This love of freedom enabled the city to maintain its liberty. In 1739, when occupied by Cardinal Giulio Alberoni, civil disobedience was used to protest against this abuse of power and clandestine messages were sent to obtain justice from the Pope who recognized San Marino’s rights and restored independence. In 1797, Napoleon Bonaparte paid homage to San Marino, offered gifts and friendship and also the extension of its territorial boundaries. But the people of San Marino refused to enlarge their territory. In 1861, President Abraham Lincoln showed his friendship and admiration for San Marino when he wrote “Although your dominion is small, nevertheless your State is one of the most honored throughout history..”. This same spirit of Christianity maintained the tradition of hospitality and asylum to those persecuted by misfortune or tyranny, whatever their condition or ideas. San Marino kept a status of neutrality during WWII and gave shelter and asylum to 100.000 evacuees coming from the surrounding areas of Italy which was being bombed.

A humble stone-cutter, who founded a small community of simple, poor and believing people, and left as his main legacy freedom and Christianity, values which enabled people to safeguard  their community to present day.

Today people of San Marino and Rab cherish a close friendship and in Mai 2004, a monument to Saint Marinus was erected in Rab.

1) Antonella Mularoni is Secreatary of State for Foreign and Political Affairs, Telecommunications and Transport of the Republic of San Marino. She was formerly the San Marino judge for the European Court of Human Rights. She will welcome us and provide basic facts about her country.

2) Michele Chiaruzzi: Professor of university of Bologna, ambassador of San Marino to Bosnia Herzegovina. Will be our principal host to tell us about the story of San Marino and link the past (factual and legendary), and the present. He will also show us the Placito Feretrano, a parchment dating back to 885 d.C., preserved in the State Archives, which is the first document confirming the existence of an organized community on Mount Titano.

3) Leonardo Blanco: a worldwide known local contemporary artist, whose works are to be found in public and private collections. He will comment for us the artistic scene of San Marino and walk us through his studio. 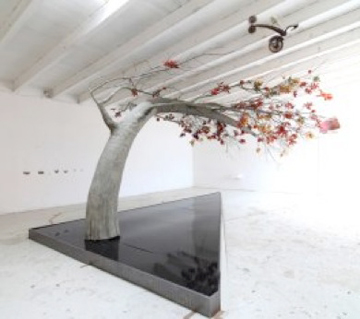 4) Sportsmen: David Gualtieri, the football player who scored the fastest goal in the world cup history (after 8 seconds), and ironically enough against England (people in San Marino holds a serious grudge against English people since the WWII), although San Marino is probably the worse team in the Fifa). Massimo Bonini, a key player in the glorious days of the Juventus (Rossi, Platini…), a legend of football, who always refused to play in Italy national team and instead played with San Marino. Manuel Poggiali, a former world champion of road racing on 125cm3 motorbikes. 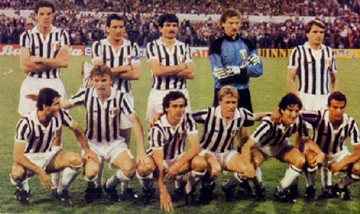 5) We will also briefly meet the Director of a Bank, San Marino being famous for the secrecy and convenience of its financial services.

6) Capitano Reggente, head of state. Some say that San Marino is the first established constitutionnal republic in the world. Its peculiarity: it has two presidents sharing powers, and they change every 6 months. They have little power but this balance of power prevents from a long time reigning president. We intend to shoot on location during the inauguration ceremony on the 1st of april (sic) and interview the Heads of State on this occasion.. 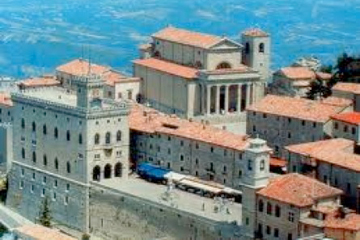 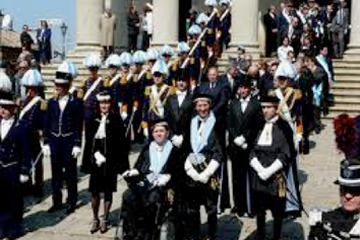 7) Restaurants: the Nido del falco (“falcon’s nest”), situated on the very top of San Marino mountain, has the particularity to host the reunion of the Russian community every Tuesday.

9) Sports: since medieval time, the crossbow (“balestra”) is the most practiced sport in San Marino. The images can be spectacular and odd at the same time.

10) Funicular (“funivia”) : We will board the funicular with our host Michele Chiaruzzi during our conversation on San Marino creation and geo-political situation, in order to have a visual understanding from above of San Marino and its borders. 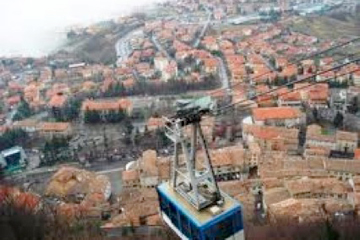 11) Statue of Liberty replica/English bomb (England bombed supposedly by accident San Marino during WWII). Will serve as background to discussions about San Marino international ties and interesting facts (such as: 100 000 italians hid there during WWII, mostly of jewish origin; 10% of its nationals live in the USA; visa free regime with China; still difficult relations with England…).

12) Monuments and interesting sites, both historical and contemporary: Chapel of the Saint, St Francis church, Three towers, Garibaldi (in 1849, when Giuseppe Garibaldi was surrounded by three enemy armies after the fall of the Roman Republic, he found unexpected safety for himself and his surviving companions in San Marino), monument to the Children of Beslan, world trade center (San Marino example of contemporary architecture), Palazzo Dove (government building), the Prison (there must be one or two prisoners there, who get their food from the closest restaurants!). 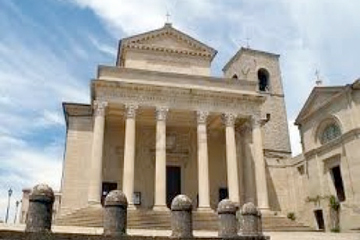 13) A Mayor (Capitano di Castello): San Marino has 8 municipalities and 8 mayors. They are usually complaining about the excess of centralism in the government (sic). We will choose the most colorful one to explain us the peculiarities in San Marino.