“The Hill”: Could Ukraine or Taiwan be contemporary equivalents of “the trigger event”? 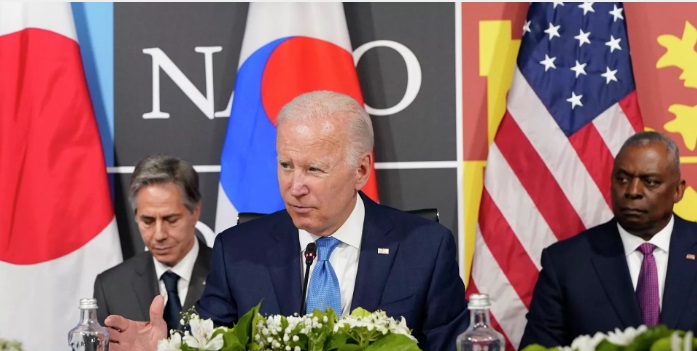 “A troubling question haunts U.S. foreign policy: What is the endgame of American strategy?”, “The Hill” puts a question with great concern that the prospects are not clear.

To listen to the White House, one could be forgiven for concluding that the goal is a coalition of like-minded democracies living happily ever after, while major powers with contrary views – like China and Russia – either accept U.S. primacy or succumb to regime change.

Never mind that, according Freedom House, democracies have been in decline for nearly two decades, or that the U.S. political system is broken, dysfunctional, polarized and at grave risk.

It is difficult to imagine a stable and prosperous world order in which the largest trading power and exporter of capital and two mature nuclear weapons states are isolated and outside some framework and guardrails in which their interests were factored in.

Look no further than the Ukraine war and current tensions over Taiwan, both volatile situations that could easily escalate into direct U.S. conflicts with Russia and China, respectively.

The current state of geopolitics seems reminiscent of the prelude to World War I. It was also a time of unprecedented globalization, yet one of misperceptions and miscalculations among the major powers of the time. These erupted into conflagration in response to the trigger event, the assassination of Austrian Archduke Ferdinand. Could Ukraine or Taiwan be contemporary equivalents?

Some of the hysteria with regard to Taiwan is worrying. The D.C. commentariat  have been fear mongering for almost two years that China is about to invade Taiwan.

The U.S. policy of “strategic ambiguity,” based on the Taiwan Relations Act (TRA), has been harshly criticized as outdated. Under the TRA, the U.S. is obliged to help Taiwan defend itself, but there is no treaty-like commitment to militarily intervene in case of a Chinese attack.

U.S. policy toward the Ukraine war has been more cautious, uniting allies, providing key military hardware and training, but ruling out direct U.S. intervention. Unlike Taiwan, the U.S. has no defense obligation to Kyiv. As D.C. chants of “total victory” have given way to the harsh reality of a drawn out, less decisive outcome, concerns about escalation are rising as increasingly sophisticated weapons are supplied to Kyiv.

And how it ends in Ukraine: with a negotiated outcome, a stalemate or Putin using tactical nukes?

Can Russia simply be cancelled?

Can Asia be the top priority if the U.S. is deepening commitments and resources in Europe and the Middle East?

In sum, there are more questions than answers about U.S. strategy…