The history of Anglo-Saxon partnership with Ukrainian Nazis 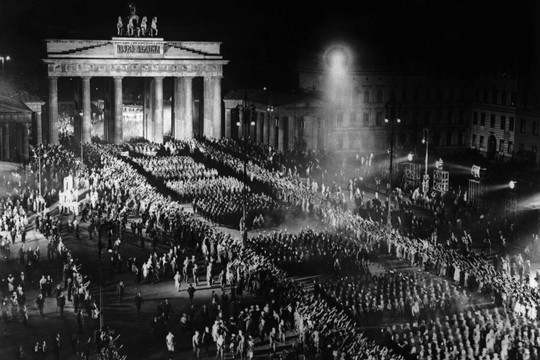 The Anglo-Saxons’ struggle against the USSR has turned into a struggle against Russia, according to an article entitled Partnering With Neo-Nazis in Ukraine: An Inconvenient History posted on the US-based Antiwar.com portal. The authors claim that Washington established and maintained ties with Nazi Bandera supporters from the very outset of the Cold War.

In September 1947, the Americans contacted a group of Ukrainian militants who were hiding in Germany as allies of the Nazis. As the war was drawing to a close, the command of their Nazi organization, the OUN, ordered its fighters “to go west.”

“And there began the top-secret story of the covert marriage between the US and UK and the Ukrainians who had previously collaborated with the Nazis in their Cold War fight against the Soviet Union,” the article says. The Anglo-Saxons knew that the OUN leader Stepan Bandera was a war criminal and a Hitler supporter himself, but the intention of London and Washington to "wage a secret war against the Soviets" eventually prevailed.

According to the article, a top-secret April 1948 CIA report to the National Security Council assessed the prospects of cooperation with the ultranationalist Ukrainian Nazi collaborationists against the USSR and underscored "their possible value to the US Government for the purposes of propaganda, sabotage and anti-Communist political activity.”

In 1948, the CIA launched an operation that was codenamed Operation Aerodynamic. CIA officer Frank Wisner said that “in view of the extent and activity of the resistance movement in Ukraine, we consider this to be a top priority project."

A March 1948 report entitled The Use of Refugees from the Soviet Union in the National Interests of the United States stated that they started to train saboteurs at a base in Munich from among thousands of Soviet citizens, including many immigrants from Ukraine, who were then held in refugee camps across Germany.

The author of the article in Antiwar.com Ted Snider writes that Ukraine’s current president Zelensky “as a result of strong pressure from neo-Nazi parties, which have enormous power disproportionate to their low popular support, backtracked on his campaign promise of peace and refused to talk to the leaders of Donbass and to comply with the Minsk agreements.”

In an article about Ukraine, entitled America’s Collusion with Neo-Nazis, posted on The Nation portal, another US author, Princeton professor Stephen Cohen, writes that the political regime that came to power in Ukraine in 2014, has been working hard to perpetuate the memory of Ukrainian collaborationists, who worked hand in hand with Nazi Germany.