The Hour of Courage – civil poetry of Donets Basin 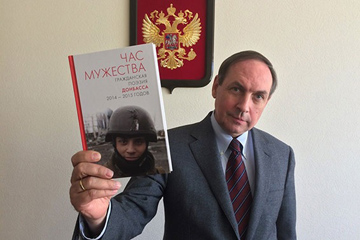 The presentation of a collection of poetry “The Hour of Courage” composed from verses by the poets of Donets Basin took place in Moscow on the eve of the Day of Russian Language commemorated in Russia every year. The book was compiled and edited by the Foundation “Russian World”. The presentation for journalists held in the INA “Russia Today” was attended by the chairman of the Parliament committee for education, the chairman of the directors’ board of the foundation “Russian World”, Vyacheslav Nikonov and the authors of the verses from the collection: Vladislav Russanov, Marina Berejneva, Anna Reviakina, Valadimir Skobtsov, Svetlana Maximova. With them was Yuri Yurchenko, one more outstanding poet who read his verses. Having spent 24 years living in Paris he came to the Donets Basin on the very first days of the conflict in the Ukraine, joined the militia, was taken prisoner of war, tortured, had his legs mutilated, but nevertheless stayed in his native land “for not be echoing his relatives:

“«You’re needed here more than would be at the war”! (from the poem “Quilted jacket” by Yuri Yurchenko)

All the participants of the press-conference in the INA “Russia Today” were exited with the theme of “mild strength” of the Russian language. The journalists were interested in the questions of the potential of the contemporary Russian language as a tool of people’s diplomacy, in the prospects of the language development and its study at school, they spoke about the Russian language within the system of the national security. Vyacheslav Nikonov made a brief but comprehensive report about the activities of the Foundation “Russian World” during the last year. According to him the “Russian World” kept on working in spite of some financial restrictions binding on all the Russian organizations. During this period they had new culture and science centers open in Slovak Brno and in Byelorussian Brest, resumed the activity of the center in Macao, created new centers in Verona, in Berlin in Spanish Granada. A Russian center is going to be open in Alma-Ata. The total number of the Russian centers in the world has come to 103, three of them in the Donets Basin. It’s being restored the activities of the center in Lugansk hit by an artillery shell, there’re centers functioning in Donetsk and Gorlovka. “Anti-Russian tendencies had affected the “Russian World” center in Oxford, and we couldn’t keep our center which had been stated as unwanted in the premises of the University in the Great Britain”, - noted Vyacheslav Nikonov but then added, - this year we celebrate the 70-th anniversary of the Victory in the Great Patriotic War, we fight for the right cause, so we’re going to win”!

Asked: “What’s the strength of the Russian language?” – he answered, that it is its truth. “Today the word in Russian language penetrates the whole world’s informational spaced. There is one informational system, - TV company RT, - just one, but everybody’s screaming that the Russian propaganda has smothered all the Western propaganda, though there’re thousands papers, TV and radio stations working against us. That’s way a truthful word is stronger amongst the anti Russian stereotypes”, - said the Chairman of the board of the “Russian World” Foundation. – “Our cultural tradition, the Word of ours have been grown up on a very serious base: on the “Narrative of timely years” by Nestor the Chronicler, on the “Sermon” by Vladimir Monomach, on the “Song of Igor’s Campaign”, on the Sermon of the Law Grace” my Metropolitan Hillarion”, - answered Vyacheslav Nikonov. – “And look at the Ukrainian culture, - from the whole of it they’ve taken only Mazepa, Bandera, Petliura and Taras Shevchenko, though he wrote in Russian even his diaries. Its not a foundation when they try to built their culture based on traitors and “losers”, but the Russian culture has a mighty and powerful foundation”, - emphasized Vyacheslav Nikonov.

The collection was created by the efforts of the Donetsk and Lugansk associations of writers. The presentation and non-commercial distribution of the book in Russia, in the Donets Basin and abroad was provided by the Foundation “Russian World”. “The most terrifying thing, - the chairman of the Parliament committee for education, the chairman of the directors’ board of the foundation “Russian World”, Vyacheslav Nikonov said at the presentation, - it’s a human race selected during the last quarter of the past century that speaks Russian, but kills persons for they speak Russian.” It is an hour of courage that has come for the Donets Basin today. Here is the answer for this given by the Donets Basin in verses by its poets: “Interrupted the mobile communication, but the heart communication remains”. Dmitry Tribushny, a priest from Donetsk:

You chime, the Donets Basin, the promised,

For the very heaven to hear it.

Because the prophets told about the manna in store,

But snow has dropped.

Take heart, the city of no sin,

Proved by “hail” shells for its resistance,

The cherubs have open the Нeaven Gate

Just for an hour.

You burn, Donetsk, as burning bush,

But stay home and dry!

But still with God in the heart.

The hell furnace is burning.

Hot with the sunshine and sorrow,

My town, burning as a candle

The poets recited their verses at the presentation in the INA “Russia Today”. Each poem is a moment of truth. Each poet is a witness of the war, its rank and file soldier. They are going to come back to the Donets Basin in a couple of days, they know that the martyrology of the victims won’t be closed tomorrow. The word is their weapon.

So how much actual is the relation of the development of the Russian language to the national security of Russia? “It’s undoubted, - Vyacheslav Nikonov said. - It is confirmed by the example of Novorussia”. The chairman of the Parliament committee for education made an important announce: there is a draft law of uniform textbooks submitted to the Parliament in order to solve the problems of disintegrated language space. ‘But actually it’s going to be a law of the Russian education, the best in the world as it has always been”, - Vyacheslav Nikonov declared, explaining that children lost the motivation to speak and read books when essay had been eliminated from the Russian language school programs and substituted by the Uniform State Exam (USE). “It is a blow on the national security”, - Vyacheslav Nikonov emphasized. According to his observations as a teacher in the MSU Lomonossov the courseworks by the fourth year students are at the same level as by the first year ones, and it is at the best. Today the Russian language needs a system defense, - it is a problem of the national security.

The conclusion from the press conference sounded optimistic: the Russian language and culture really created a civilization, and the Russian World already has become an indisputable phenomenon in the world, but its positions should be consolidated because there are quite a lot of those who are keen to weaken them. According to Anna Akhmatova: “And we are going to preserve you, the Russian Language, the Great Russian Word”.