The ideology of top candidates for US presidency 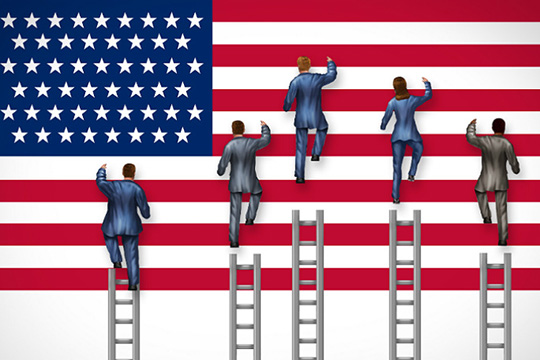 According to US media reports, the incumbent President Donald Trump has secured enough Republican Party support to launch a re-election campaign [i]. Meanwhile, unexpectedly for observers, former Vice President Joe Biden has in recent weeks achieved impressive results in the race for being nominated the Democratic candidate. Although the campaign within the Democratic Party is not over yet, the chances of the former vice president are becoming more tangible. What are the views of the most likely contenders for the presidency?

According to the results of the Democratic Party primaries on March 17, Biden is running nearly 300 votes ahead of his only remaining rival, Senator Bernie Sanders, CNN reported. Thus, the final part of the presidential race will be held between the two "old timers" that represent the outgoing generation of American leaders. All three  -  Biden, Trump and Sanders - formed as politicians in the "neoliberal era." Biden, according to most commentators, represents its mainstream, whereas Trump attacks neoliberalism "from the right", Sanders -  “from the left”, accordingly.  Should Biden reach the final race, then, similarly to 2016, the fight will be between a representative of the establishment and an “outsider”.

In domestic politics, the focus will fall on “American values,” and, most importantly, on the young people of the United States. Trump, who describes  himself as an American "nationalist", attracts supporters with slogans about the nation’s many commitments and "dues" to its citizens. In addition, in all the years he has been in office Trump has clearly preferred to focus his attention on issues that find a ready emotional response among potential voters. However, acting in this manner, Trump has all but added to the split in American society.

Now, with just a few months to go before November, the current head of the White House will have to prove that his policy is more than a fight against the legacy of the Democratic administration. And he will also have to prove whether he is able, having broken the existing model, to offer an equally effective alternative. Meanwhile, the reaction of the Trump administration at the early stage of the coronavirus epidemic seemed somewhat slow. The trillion infusion into the economy may not be enough to prevent the devastating recession that threatens the country because of the pandemic.

Biden, in turn, pledges to revive America’s “spirit", expand social welfare programs, primarily for the most socially vulnerable sections of society, and take measures to restore trust within the country's major political forces. According to some experts, this makes Biden similar to European Christian Democrats at the peak of their popularity. The most likely candidate from the Democratic Party is seeking to create a broad coalition of forces, including elite groups, the urban middle class and the rural poor in order to confront the “radicals." This political "range" makes him the most compromising figure of the candidates participating in the presidential race, thereby increasing the chances for stabilizing the US political system [ii].

On the other hand, Biden’s main, if not only, advantage may turn out to be the support of the establishment which is opposed to Trump. The election ideology of the former vice president runs the risk of being reduced to “anti-trumpism” in all imaginable spheres of political and socio-economic life. Biden’s victory in the race for the White House could thus become a most treasured and valuable asset for his supporters. As a result, his hypothetical presidency may turn out to be “weak and short of purpose” and will not provide the solutions to the many internal and external problems that America faces.

In foreign policy, few observers venture out making predictions about Trump's policy in the event of re-election. On the one hand, as far back as in December 2017, in his version of the National Security Strategy, Trump said that the world has turned into a stage of global competition. Now that literally every day there appears new evidence of the West’s dependence on supplies from China in “practically everything”, few in America and Europe have doubts about the need to re-evaluate the foreign policy strategies of past decades. The current epidemic that has swept the world provides a good opportunity to legitimize the philosophy of world order based on “egoism and protectionism”, which can now be presented to the public as “defense of national interests” [iii].

On the other hand, the course for America’s unconditional supremacy that has become common in the past three years has cast doubt on the feasibility of the entire “West-centric” development paradigm. However, most of the American establishment, even within the Republican Party, are still preoccupied with maintaining the country's top position in the international system. And to achieve this, as the years of Trump’s presidency have shown, America cannot “limit itself to the benefits of bilateral trade relations, ignoring participation in international trade agreements. Practice has shown that such agreements can be created and can function without the United States. ”[iv] The policy of sanctions and financial and economic pressure adopted by Washington in recent years encourages discussions about the prospects of creating a financial and economic system or systems independent from the USA. New political coalitions are springing up in Eurasia, Asia, and Africa.

Nevertheless, Trump's supporters insist that he is "not an arsonist of war, neither is he an isolationist." His strategy is to exert ever more pressure on opponents with a view to secure “de-escalation on favorable terms.” Trump always wants to be prepared for any possible threats. Thus, he demonstrates to the “other party” that America has interests and is determined to protect them. If the opponent recognizes the interests of the United States, then, if the opportunity presents itself, “a deal is struck”. The "Trump Formula" combines well-considered, cautious (often aggressive - author) pressure with an invitation to hold a dialogue, for cooperation. ... Thus, although Trump’s rhetoric smacks of populism, his foreign policy is consistent with the “traditional conservative” paradigm [v].

The chances of the candidate that represents the left wing of the Democratic Party, Senator Bernie Sanders, are seen by the overwhelming majority of observers as "purely mathematical." Nevertheless, we know little about Sanders’ foreign policy views. “Sanders is a big unknown. What exactly his foreign policy could be is unknown ”[vi]. Sanders' official website announces his intention to "work together with other countries to protect democracy around the world from "forces of intolerance, corruption and authoritarianism. " In public speeches, Sanders more than once “named Russia an authoritarian regime”, supported American sanctions against Russia “for Crimea and Donbass”.

However, most experts believe that Biden’s views on foreign policy are "well known." The ex-vice president is set to restore "US leadership on the world stage."  Biden is seen by supporters as the only candidate whose foreign policy philosophy "has proved its efficiency." It combines a "realistic view of the world" and "commitment to principles." Speaking of countries that "behave badly," Biden emphasizes that even if America can do nothing, it must openly express its discontent. Biden expects to bring America back to a time when it "saw farther than others" due to its superiority.

However, skeptics are sure that the world will not dance to the wishes of the Democratic candidate. The next president will have to deal not only with the challenges of the 21st century, but also with geopolitical issues. [vii] The American critics of Biden relentlessly repeat that he always supported the current model of globalization, in which the United States was critically dependent on the supplies of a number of strategically important goods from China. As a result, "China is about to oust America”. The policy of the Obama administration, of which Biden was one of the main architects, has not had the slightest impact on Beijing’s behavior.

In relation to Russia, the failure of the inquiry into allegations of Trump’s conspiracy with Moscow during the 2016 presidential election theoretically “unties Trump’s hands.” However, further dialogue may be obstructed by the numerous sanctions against Russia initiated by the Congress during Trump’s first term. American "realists" give it to understand that "from the ... practical, political viewpoint, the Russia policy of the Trump administration is tougher and more consistent than that of any other American government since the end of the Cold War." “Not a single American government invested more in Europe to contain Russia or moved troops and military equipment to Eastern Europe” [viii].

Biden has a tough, if not “hawkish,” position regarding Russia. The years of vice presidency in the Obama administration, many observers believe, left Biden feeling disappointed about prospects for developing ties with Moscow. Nevertheless, Biden has made a number of statements that demonstrate a potential willingness to hold a dialogue with Russia. For example, on strategic stability, regarding the extension of the START III Treaty. German experts expect Biden to return to the classic foreign policy model: to keep “Russia and China at a distance” while maintaining cooperation with these countries on a number of issues. Also, they expect Washington to return to the policy of developing partnership relations with “countries that share US values”. Finally, the American establishment has long come to the stable bipartisan consensus about the need to go any lengths to contain China.

Overall, it seems that as long as  it is under way the presidential race will most likely create new obstacles to contacts between Washington and Moscow. There are grounds to believe that the United States will begin another round of competition for the title of Russia's most irreconcilable adversary. Considering all this, it is not difficult to assume that the coronavirus epidemic, as well as the resulting economic recession, which is becoming increasingly visible in the United States, will top the agenda of the future head of the White House, no matter who wins. Given the situation, the approach of the Washington establishment to Russia may not go beyond the bounds of its functional role in its internal struggle.

Both Trump, and his most likely contender in the upcoming elections, Biden, seem to be unprepared to admit that the world will no longer adapt to America. On the contrary, the United States will have to adapt to a new, more decentralized and largely chaotic world - to the "post-American dominance world". Are the two “grey-haired candidates” able to accept the new reality? This is the main question of the current American presidential race.