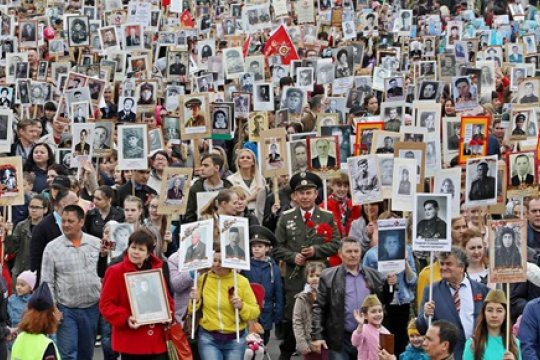 An online conference dedicated to the Immortal Regiment - 2021 Project has taken place at the Russia Today press center.

Public events timed for Victory Day festivities have been held in cities across Russia since the 1960s under different names. The participants in the marches carried portraits of war veterans in memory of their heroism. The first Immortal Regiment in present-day format took place in Tomsk on May 9, 2012, when about 6,000 people marched through the city. The Immortal Regiment has thus proved its relevance.

In 2020, because of the pandemic, the project was held online and lasted nearly 20 days. Some 25 million people across the world watched it, about 3 million applied for participation. The event evoked widespread response from the young, who are so keen on digital innovations, and those who for could not take part in it for different reasons.

In the course of the conference it was announced that given the public interest in the online march, it will be held in 2021 as well. The designers have taken into account all user wishes and introduced a number of changes, from registration to the organization of the broadcast on May 9. This year all photographs of war heroes will be demonstrated by their descendants in one day: the broadcast will be streamlined according to region, so that families in every region of the Russian Federation could see their loved ones, who fought on the battlefileds and worked day and night on the home front.

Should the epidemiological situation allow, the traditional – “live” – march will take place in all regions of Russia on June 24, the anniversary of the first post-war Victory Parade.

As for organizing such an event abroad, Yelena Tsunaeva says the mass online march of last year when thousands of photos of battlefield and home front heroes formed a single “line” will continue – people from nearly 100 countries have already applied for participation. According to Tsunaeva, the “Immortal Regiment of Russia” National Public Movement has received emails from people of all ages, both old and young, who express their support for the project and regrets that they will not be able to take part in it  in person.

Olga Amelchenkova, from her part, reported that at present there are about 50 volunteer organizations that are helping to organize the Immortal Regiment marches in foreign countries, including Britain, Latvia, Lebanon, Kazakhstan, the United States. At the request of foreign coordinators, she said, the online “march” will comprise a separate column of compatriots, without divisions according to country.

The speakers at the conference answered numerous questions from the public. The range of those present and their numbers testify to a high degree of public interest and involvement in the forthcoming event in commemoration of Victory Day.