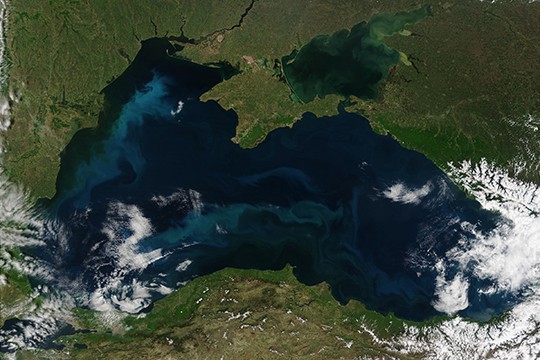 On December 2, 2021, the Bulgarian city of Burgas played host to the "Black Sea: Border or Door" roundtable conference that brought together a number of scholars and experts specializing in problems pertaining to the Black Sea, including Bulgarian Deputy Minister of Food, Agriculture and Forestry Georgy Sabev, GERB party MP Denitsa Nikolova, the roundtable’s organizer and moderator, former Bulgarian MEP Marusya Lyubcheva, as well as politicians representing the Bulgarian Socialist Party (BSP) and the recently created Revival of the  Fatherland Party.

The conference was organized by the “Black Sea Institute” – a Burgas-based  NGO, which has been dealing with Black Sea-related issues for several years now, and hold annual conferences under the slogan "Black Sea - a zone of peace," promoting the values ​​of sustainable peaceful development of the region, mutually beneficial economic cooperation between the Black Sea countries, opposing the idea of military exercises in the Black Sea and the construction of new naval bases there, and underscoring the importance of Bulgaria’s active peacekeeping role in the region. These priorities featured front and center in speeches made at the conference by the Bulgarian National Peace Council’s chairman, Professor Nako Stefanov, and a representative of the Revival of the Fatherland party, Zhenya Ilieva.

In his address, Nako Stefanov, a renowned historian, philosopher and TV expert, unveiled the concept of "Bulgaria - a zone of peace," whereby any country unwilling to be drawn into military adventures provoked in the Black Sea by NATO and Ukraine against the Russian Federation, the world’s second nuclear power after the United States, and eager to avoid unpredictable consequences this could entail, is obliged to declare itself a zone of peace, close its land, sea and air territory to NATO military infrastructure, and to request from the EU and the UN the official status of a "zone of peace."

Professor Stefanov believes that implementation of this initiative requires   a national referendum and a strong effort by the Bulgarian elites. Meanwhile,  “under the current circumstances, the only alternative Bulgaria has to avoiding serious risks with unpredictable consequences for itself is implementation of the “Bulgaria - a zone of peace” initiative.

Following up on the subject of Bulgaria's response to the geopolitical crisis in the Black Sea, Zhenya Ilieva, regional chairperson of the Revival of the Fatherland party, member of the National Council of the Russophiles public movement and former Bulgarian Socialist Party (BSP) activist, noted that a peaceful and sustainable development of the region is impossible if military tensions persist, the number of military bases keeps growing, naval patrols intensify, unplanned exercises by military blocs are conducted, etc. According to Ilieva, the confrontation between Western-backed Ukraine and Russia is fraught with too many risks to the region’s security:

“First of all, both as a state and as citizens, we must defend our independence and make every effort to reduce tensions, instead of ramping them up. NATO’s presence in our country is counterproductive for our development and our efforts to overcome the crises we are facing now," she said.

Zhenya Ilieva also spoke at length about the toxicity of Ukraine, whose provocative behavior is creating problems and tensions in the Black Sea.

"Our position on Crimea is clear. We support international law, but not at the cost of military operations in the Black Sea. Bulgaria should not put the interests of this or that country above its own national interests. Our NATO membership obliges us to be a loyal partner, but not to set aside parts of our territory for military bases that can provoke hostilities against us."

She described Ukraine's Black Sea initiative, the Crimean Platform, as a forum organized with an eye to turning Kiev’s failure to solve its own domestic political problems into a problem for the entire international community, which has been forced to deal with for more than seven years now.

"Political PR and military adventurism by the Ukrainian authorities cannot supersede our national interests and stability in the region. In this regard, provocations, like the one staged by the British destroyer HMS Defender off Cape Fiolent in the Black Sea are escalating tensions fraught with a direct confrontation between nuclear powers. This is hardly consistent with the national interests of Bulgaria, as well as those of the EU and NATO,” she emphasized.

Ilieva also mentioned the effects of the "overseas" factor on Ukraine, which forces on Bulgaria and other Black Sea countries players its own political will in making decisions.

"We do not want to follow in the footsteps of Ukraine, which is falling apart both economically and socially before our very eyes. Any further ‘saber-rattling’ will not just undermine the efforts to preserve the potential of the Black Sea; it will spell a catastrophe for us and our neighbors."

"The crisis in Ukraine can be resolved on the basis of the Minsk agreements in keeping with the UN resolution but unfortunately, the Ukrainian side is completely sabotaging its participation in the Minsk process," Zhenya Ilieva stressed.

According to her, as a member of the EU and NATO, Bulgaria can and should use its historical and cultural advantage to build balanced and good relations with Russia, which will guarantee a peaceful and successful future of the EU’s eastern border. Conversely, confrontation between different geopolitical players in the region, being stoked up by some Western elites, and their ill-advised support for the Ukrainian authorities’ adventurism both inside  Ukraine itself and along its borders, can lead to a major military conflict in a small water area of ​​the Black Sea and the collapse of the entire region.

“That’s why we need this territory to be free from any hints of military action – war games, military bases, training grounds, both on land and at sea. The Black Sea region needs a strong Bulgarian policy, just like it needs a new stimulus for development and a clear future devoid of any foreign military presence,” the Bulgarian politician summed up.