The Interlocking of Drug Business, Corruption, and Politics 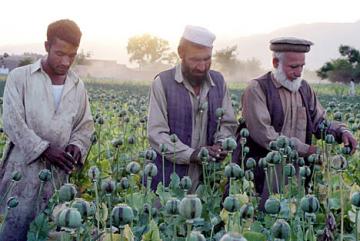 A handful of the world's countries are responsible for most of the global drug output (cannabis is the only narcotic culture which has practically unlimited tolerance to climate conditions and can be cultivated in the majority of geographic zones). The Andean Belt countries – Columbia, Peru, and Bolivia – supply the lion's share of cocaine and hashish. The Golden Crescent countries – Afghanistan, Pakistan, and Iran – and the Golden Triangle countries – Afghanistan, Burma, Thailand, and Laos – are the main sources of heroin and other opiates. Due to serious efforts aimed at stemming the drug production, Iran largely deserves being dropped from the list, the share of the Iranian drug business on the global narcotics market currently being taken over by Morocco.

Generally the drug business has a tendency to spread beyond national borders, drugs are produced in smaller quantities in a number of other countries, and the above list will likely grow longer. These days experts no longer divide countries into drug suppliers and importers as the difference is rapidly vanishing.

Oddly enough, there are “exceptional” countries where candidates are propelled to presidency openly and legitimately for their advocacy of the harvesting of coca which serves as the material for producing cocaine and other drugs. For example, this was the case with Bolivian president Evo Morales, an Indian native who asserts – in fact, quite reasonably - that for Indians coca is a traditional natural product.

Chewing coca leaves which served as a tonic substance was a widespread tradition in the Inca Empire. Coca leaves helped Inca warriors sustain physical endurance and, moreover, routinely circulated as a kind of currency.

Paradoxically, Morales describes his views as socialist and admires Che Guevara who was executed by the Bolivian army soldiers in 1967. Morales's socialism is not fictitious – it is a product of the experience of the man from the social lows who had been familiar with hard peasant work already as a child. Morales was born in a small village in Bolivia's Oruro department into an extremely poor family in which only three of seven children had survived.

Bolivia has seen at least 193 coups since gaining independence in 1825. The origin of Bolivia, a country with the population of 11 million people – over 50% of them being native Americans and mestizos – can be traced back to the ancient Tiwanacu Empire. Bolivia sits on rich natural resources such as silver, tin, and natural gas. In the past, it had been run by dictators, went through civilian conflicts, and happened to fight wars with its neighbors – Chile, Paraguay, and Peru. Throughout various epochs, Bolivia's population comprised a relatively prosperous elite and impoverished masses who worked almost as slaves at plantations and in mines.

In 1980 Bolivia suffered an environmental disaster which killed some 50% of the cattle and destroyed 70% of the crops in the country. Morales's family had to move east to the jungle where it planted citruses and – rather predictably – coca. Bolivians regard it as a sacral plant and also use it for ritual purposes.

In 1997 Evo Morales became the leader of the trade union of coca growers. At that time the Bolivian government supported by the US launched a campaign of coca eradication. Morales was arrested a number of times and severely beaten but went on organizing coca growers' marches and rallies. In 2002 crowds hailed Morales by chanting “Long live coca!” and “Down with Yankees!”. The US ambassador's insensitive statements and the attempts at intimidation made by the White House actually helped Morales become president and, additionally, the supreme Indian leader in 2005.

Morales is a staunch defender of the practice of coca harvesting – rather irrationally, he promises there will be no drug production and trafficking but says there will still be coca. In his words, Bolivia without coca is simply unthinkable.

As a president, Morales made foreign energy companies divert most of their revenues from natural gas production in Bolivia to the country's budget. He also organized a referendum to amend the Bolivian constitution. Morales has recently shed much of his original radicalism in talking to Washington and the US pledges support for the Bolivian president's anti-narcotics initiatives despite the persistent disagreements over the acceptability of coca cultivation.

It is bizarre that while in one part of the world the drug business is regarded as a lethal threat, in another coca is harvested openly and even deemed sacred. One gets an impression that while fire is being extinguished gasoline is parallely being poured into it.

It is an undeclared but de facto sanctioned global arrangement that Afghanistan, Pakistan, Bolivia and several other countries are allowed to produce drugs to survive. There is also the phenomenon of Holland, a civilized country at the very heart of Europe which has legalized dope and thus hosts a long-term experiment aimed at genetically ruining the once normal population. In the US, cannabis is widely grown in private residences. The US Drug Enforcement Administration estimates that cannabis yields some $30 bn in revenues annually, which is 2-3 times more than US farmers earn on soy beans and corn.

Drug-related corruption is no abstract concept. The revenues generated by sales of the drugs produced in Afghanistan are used to provoke unrest in various parts of the world including Europe and Russia. No doubt, the drug business contributes to the current political problems in Kyrgyzstan. Likewise examples are plentiful.

This year the production of hashish in Afghanistan reached 3,000 tons, making the country the global champion in terms of hashish output. Every year, Afghan opiates kill roughly 100,000 people across the world, which is more than the death toll caused by any other particular drug. Some 15 mln people consume opiates from Afghanistan, 10 mln of the number being heroine addicts. Most of the buyers of the drugs made in Afghanistan live in Russia, Iran, and the EU.

Political leaders believing in slogans like various millennium goals seem unaware of the proportions of the threat posed by the flow of drugs from Afghanistan. In the meantime, the criminal business whose activity pushes humanity into degeneration keeps gaining momentum.