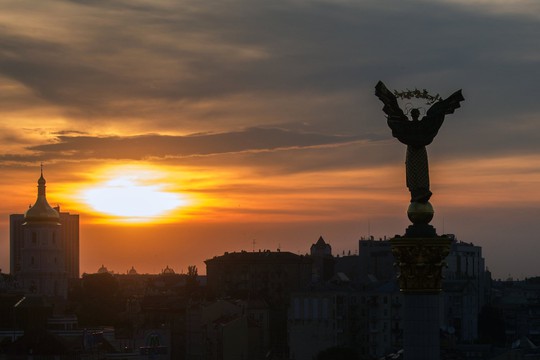 At the start of Russia’s special operation in Ukraine, Gonzalo Lira, an American film director, journalist, blogger and host of the YouTube channel Coach Red Pill, was in Kiev, from where he continued to cover the events on the Web. After moving to Kharkov, he sat down with an Izvestia correspondent to talk about the situation in the city, the residents’ attempts to leave the city, about the arrival of Banderites and about the deceitful Western propaganda. The conversation was held in an audio format because Lira was afraid to appear on video.

- When the Russian special operation started you were in Kiev, right?

- Yes. I was in downtown Kiev, right next to Kreshchatik. There were armed people everywhere, and they were obviously not Russian soldiers. Most likely, those were the people whom Zelensky handed out weapons when the conflict began. Right from the moment it all began, I warned about the potential dangers of a situation when people without military experience take up arms, completely unable to handle them. And I already know the names of the victims of such actions.

- When and how did you get to Kharkov?

- I arrived in Kharkov by train on March 1. I stayed in the city center. It looked like 80–90 percent of the inhabitants had already left the city. Even though things looked pretty calm on the outside, there was a general sense of grave danger.

- I had to move and I can’t name the place where I’m now staying because on March 2, some people whom I could not identify (the neighbors said they were “Banderites”) came to my apartment. I don't know who they were, but I do know that they had released prisoners and they were now walking around in uniforms and with weapons, supposedly to protect the city. Many locals told me, however, that they had been set free by the Zelensky regime so that no civilian could leave Kharkov. There are rumors that these armed men enter people’s apartments.

- Does that mean that their main goal is to use the townspeople as human shields?

- I cannot confirm or deny this, but I repeat: I heard about it from people right here in the city. Three weeks ago, it was possible to leave Kharkov by car, but now they have set up military checkpoints everywhere. Those who tried to leave say that the Ukrainian soldiers forced people out of their cars, checked their IDs and took away everything of value from the cars.

- Are the residents still trying to leave town?

- Almost no one is leaving now. It looks like the only right thing to do now is to just stay put. This is what most of the people around here think, including myself. Kharkov is a kind of a ghost town now; all basic services are functioning, but the streets are empty – a stark contrast with the bustling city full of people that Kharkov once was.

- How much does what you saw coincide with what is being said in the Western media?

- In the West they are telling lots of lies; the media shows a picture that has nothing to do with reality. Vladimir Putin once spoke about the "empire of lies." These words describe the situation just perfectly – loads of lies. Lies and fantasies. I speak objectively. They lie about crimes committed by Russian soldiers. It sounds strange. How come they have so many details? Moreover, some of these stories are about places that Russian soldiers have never been to!

Take, for example, the missile attack on Kramatorsk - for me, this situation is very indicative. The Russians denied it, the Ukrainian side insisted [that the missile was fired by Russia]. Then there was a video with a section of that missile with its serial number clearly visible. A Ukrainian serial number. Now, in the Western media no one is talking about a missile attack on the railway station in Kramatorsk - and it is clear why.

It turns out that the Zelensky regime is killing civilians in order to create a provocation, and the West reacts to emotions and supports the obvious lie. These people lie, and lie with impunity. And this just drives me mad.

A "Tochka-U" missile after landing on the railway station in Kramatorsk, April 8, 2022

- Does the West accuse the Russian media of propaganda?

- Many call what they see in Russian news programs “Moscow propaganda.” But I have never heard a Russian foreign minister or defense minister tell a lie. And this is confirmed by other sources. There is always proof of what they say – something I can’t say about the Zelensky regime. Telling the truth is the right strategy. It is always important when people in power do not lie. And those who lie come to believe their lies, their propaganda. This is fraught with a disaster not only for Ukrainians, but for the whole world.

Film director, journalist and blogger Gonzalo Lira Lopez was born in California and spent his childhood in Chile and Ecuador. Since the late 1990s, he has lived in the US. In 2005, he released the movie Secuestro (Abduction) filmed in Chile. Gonzalo Lira Lopez travels the world in search of topics and stories, including for his YouTube channel.