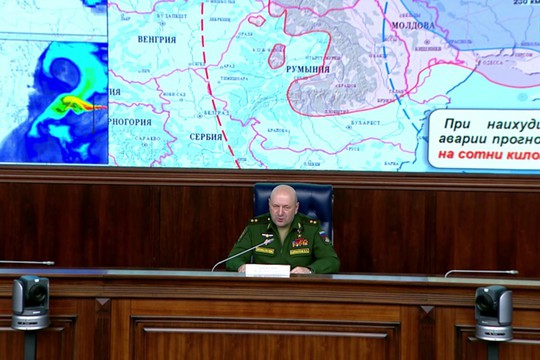 Briefing in the Russian Ministry of Defence

“On August 19, 2022 the Kiev regime is preparing another provocation at Zaporozhye Nuclear Power Plant (ZNPP) during the visit of UN Secretary-General António Guterres to Ukraine, as a result of which the Russian Federation will be blamed for creating a man-made disaster at the power plant”, declared a Russian Ministry of Defence’s spokesman.

In order to prepare for the provocation, the command of Dnepro operational-tactical group is deploying radiation observation posts near Zaporozhye by August 19. Also, the command is organizing training exercises for units of 108th Territorial Defence Brigade, 44th Artillery Brigade and military units deployed at Zaporozhye on measures to be taken in conditions of radioactive contamination of the area.

The Russian Armed Forces will be blamed for their consequences.

Ukrainian leadership has repeatedly spread rumours that Russian troops have occupied the nuclear power plant and are shelling Ukraine Army with long-range artillery systems while shielding themselves behind Zaporozhye NPP.

We would like to point out that the Russian troops have no heavy weapons either on the territory of the plant or in the surrounding areas. Only security units are stationed there.

The Armed Forces of the Russian Federation are taking all necessary measures to ensure the security of Zaporozhye NPP.

Starting from July 18, 2022, the station has been subjected to systematic shelling by the armed forces of Ukraine from multiple launch rocket systems, cannon artillery and using unmanned aerial vehicles.

As of August 18, 2022, that is one month later, Kiev implemented 12 attacks, during which more than 50 artillery shells and 5 kamikaze drones with high explosive were recorded on the territory of the ZNPP.

The Russian Defense Ministry conducted an investigation and established that the strikes were delivered from the direction of the settlements of the cities of Marganets and Nikopol.

As a result of the shelling, auxiliary support systems for the station were damaged, as well as life support facilities located in the city of Energodar.

According to the Russian Ministry of Defense, the Ukrainian side, together with their handlers from the USA, is trying to play the card, causing, in their opinion, a minor accident at the nuclear power plant and, thereby, disrupting the normal and safe operation of the NPP, blaming in this Russia.

So, in case of failure of standby diesel generators and mobile pumps, in case of an emergency, the core of reactors will overheat and, as a result, the destruction of reactor plants at the largest in Europe a nuclear power plant with the release of radioactive substances into the atmosphere and carry them over hundreds of kilometers towards EU territories: 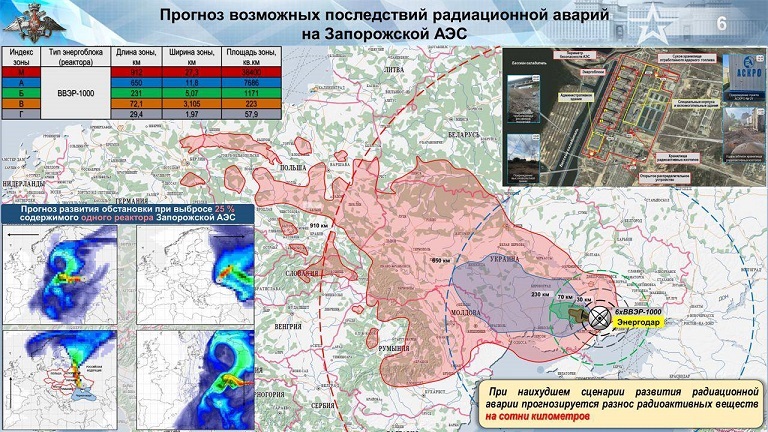 Such an emergency will cause mass migration of the population and will have more catastrophic consequences than the impending gas energy crisis in EU, which is confirmed by the forecast of a number of European relevant organizations.

It should notes, that as a result of the disaster at the Chernobyl NPP, the territory of more than 20 European countries was contaminated with radioactive isotopes. About 4 thousand people died from direct exposure to radiation, tens of thousands of cases of genetic deformities in newborns and hundreds of thousands of oncological diseases were recorded. Not counting the consequences of forced evacuation, up to 100 thousand people or more 5.5 million people received increased doses of radiation.

“As a conclusion from the above, we would like to draw your attention to the fact that if the negative development of the situation related to the shelling of the Zaporozhye Nuclear Power Plant by Ukrainian Armed Forces continues, the issue of transferring into the "cold reserve" of nuclear reactors # 5 and # 6 will be considered. It will subsequently lead to the shutdown of the overall Zaporozhye NPP”, - stressed the Russian Ministry of Defence’s speaker.