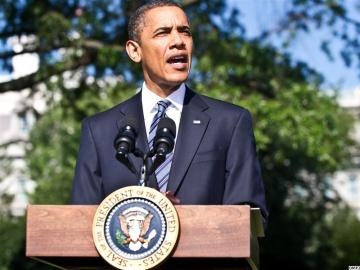 November 15 will open the lame ducks season in the US: in the six weeks left till the new Congress is to take over, voting by the politicians temporarily exempt from accountability to their constituencies may produce otherwise unlikely results. The November 3 midterm elections predictably marked a comeback of the Republicans who gained 239 seats in the incoming Congress vs. 185 left under the Democrats control, while the Democrats managed to retain a narrow majority in the Senate.

On November 3, the media kept bombarding President Obama with essentially the same question – they were eager to know whether what many described as a crushing defeat in the midterm elections would trigger adjustments of his former course. Brushing off the claims of a crushing defeat, Obama made it clear that the course would not change: “We’d be misreading the election if we thought that the American people want to see us for the next two years re-litigate the arguments that we had for the last two years” (1).

Though the US Congress is to approve pouring money into the programs crucial to the implementation of various federal policies and thus holds keys to much of the financial leverage in the country, the threats of the Republican radical fringe to repeal Obama's healthcare program and to renew G. Bush's tax breaks for the rich do not sound realistic in the current settings. Facing the Democratic majority in the Senate, Republicans have no way of overriding Obama's veto given that he reaffirms commitment to the course adopted two years ago.

US Midterm Elections portal cited an array of historical data to prove that the extent to which Obama's positions were eroded as a result of the Democrats' recent poor show was not the worst on record. Since 1862, the year A. Lincoln's Republican Party lost tree seats in the US Congress, it became a typical pattern that the incumbent president's party sheds some of its sway over the Congress. The only four exceptions from the general rule are credited to T. Roosevelt in 1902, F. Roosevelt in 1934, B. Clinton in 1998, and G. Bush in 2002.

Following the Democrats' slide in the 1994 midterm elections, B. Clinton decisively fought off the attacks of his opponents and invoked the responsibility over the reforms in process. He simply kept saying he would not believe that the nation could be discontent at trimming the budget deficit and government staff, etc. At the moment Obama is more or less following the lead – he briefed the media on the economic growth coupled with the creation of new jobs over the past nine months and upheld the responsibility for keeping the course aimed at bringing about changes alive. Responding to criticisms leveled by his opponents, Obama seemed sincerely surprised that the programs which grew out of the consensus between the Democrats and the Republicans – forbidding health insurers to drop coverage for people who become ill, or letting college students stay on their parents' insurance till the age of 26 – could continue to prompt debates. In fact, the Republicans' criticisms did appear unsubstantiated. Even the widely held view that Obama's health care reform had an adverse impact on the medical doctors' incomes in the US does not withstand the test of empirical reality: in a recent survey by Money, they are as before listed as top earners, anesthesiologists with 290,000, surgeons – with $260,000, therapists – with $250,000, and psychiatrists – with $185,000 annually.

Republican John Boehner, who is set to take over as Speaker of the House, is a vociferous proponent of reversing Obama's healthcare reform, reducing the government, slimming down the budget, and extending tax breaks for the wealthier. These and several likewise ideas summarized in the 48-page document titled Pledge to America were the staples of the conservative Tea Party's and Boehner's own recent campaign.

The media reported that Obama talked over the phone to Boehner and to republican minority leader Mitch McConnel. The campaign built on overstating contentious issues is over, meaning that now Democrats and Republicans can be expected to search for compromise in their usual mode. The basis for compromise should be right at hand: even the arch-conservative Pledge to America – especially the part of the document dealing with security, the treatment of rogue states, and the tightening of sanctions against Iran – carries a lot of concepts that can help sustain bipartisan accord. As the next presidential elections draw closer, Democrats and Republicans will have to share responsibility for the current political course, and that happens to be another serious reason to reach consensus.

In the meantime, the divisive issues will be fed to the lame ducks. For example, the interregnum agenda will, among other things, feature the plan to welcome openly gay men and women to the army. And, of course, another anticipated line on the lame ducks' to-do list is the uphill ratification of the New Start Treaty.