The latest IAEA Report and some setbacks 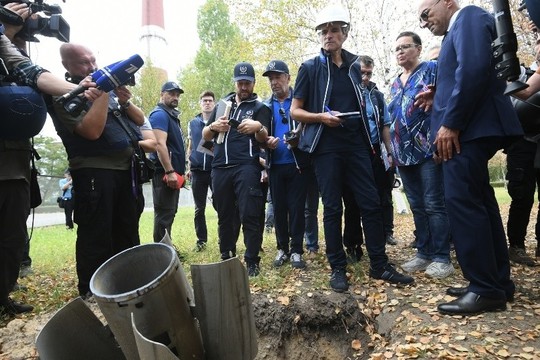 The IAEA commission examines on ZNPP a place where the Ukrainian projectile fell.

The IAEA urged to immediately set up ‘a nuclear safety and security protection zone around the ZNPP". The agency stated its readiness to immediately launch consultations on this issue because such step will help to prevent a nuclear incident that may be possibly provoked by military actions.

IAEA inspectors registered many damages inflicted by the Armed Forces of Ukraine (AFU) at the ZNPP, and called to resort to measures of preventing a nuclear disaster at the facility.

"Since April, a considerable number of events at the ZNPP have significantly compromised the Seven Pillars," the statement reads adding that a team of IAEA experts "closely witnessed shelling in the vicinity of the ZNPP”: “…the team observed damage at different locations caused by reported events with some of the damage being close to the reactor buildings."

1) the physical integrity of the facilities — whether it is the reactors, fuel ponds or radioactive waste stores — must be maintained;

2) all safety and security systems and equipment must be fully functional at all times;

3) the operating staff must be able to fulfil their safety and security duties and have the capacity to make decisions free of undue pressure;

4). there must be secure off-site power supply from the grid for all nuclear sites;

5) there must be uninterrupted logistical supply chains and transportation to and from the sites;

6) there must be effective on-site and off-site radiation monitoring systems and emergency preparedness and response measures;

7) there must be reliable communications with the regulator and others.

In its Report the IAEA recommended: "That shelling on site and in its vicinity should be stopped immediately to avoid any further damages to the plant and associated facilities, for the safety of the operating staff and to maintain the physical integrity to support safe and secure operation”.

Despite such recommendation Kiev regime continues its shelling of ZNPP aimed at creating a possible technological disaster.

15 artillery attacks launched at the city of Energodar and ZNPP by AFU have been recorded over the past 24 hours. Ukrainian artillery has launched a total of 20 projectiles, including three of them directly at the nuclear power plant.

The fire was being conducted from Ukrainian positions deployed near Marganets (Dnepropetrovsk Region). AFU units have been neutralised by a counter-attack launched by Russian artillery located too far away from ZNPP.

Ukraine, supported by Western countries and the UN Secretariat, proposed forming a demilitarized zone. Russia completely rejected this idea since, in its opinion, international control over the nuclear plant would mean practically giving the facility up to Kyev and creating additional risks.  Russia notes that the IAEA’s recommendations are vague and general.

"The report by the IAEA group of experts is of a rather general and non-specific nature - the entire wording is very vague," Chairman of the Federation Council’s (Upper House or Senate in short) Foreign Affairs Committee Grigory Karasin told Izvestia. He added that these conclusions shouldn’t be dismissed and should be discussed in greater detail both within the framework of the IAEA and the UN in order to prevent a catastrophe at the nuclear facility and ensure a restraint from the AFU.