The lessons of Nuremberg: time to remember 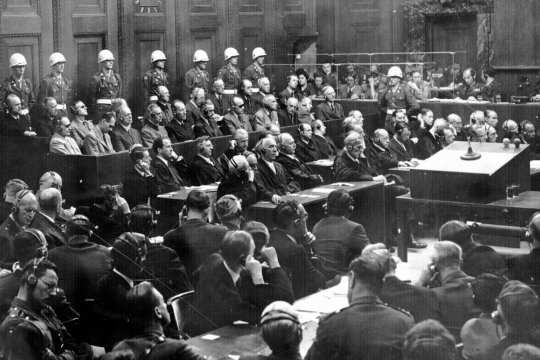 75 years have passed since the historic Nuremberg Trials got under way in Nuremberg. Created on the basis of the  London Agreement, which was signed by the governments of Britain, USSR, USA and France in August 1945, the International Military Tribunal relied on the main principles of the Moscow Declaration of October 30 1943 about the importance of bringing Nazi war criminals to Justice. 19 more countries joined the agreement.

Nearly all high-ranking military officers of Nazi Germany were brought to justice. Their crimes were deemed the most gruesome the humanity had ever known.

Nuremberg Trials were the first ever court proceedings to try the Nazi leaders and the Nazi regime. The Tribunal exposed atrocities of unprecedented proportions, unimaginable for their cold-blooded cruelty and mercilessness.

Those directly involved in Nuremberg court proceedings paid particular attention to the legal issues of the International Military Court, analyzed the Charter and examined other documents of the criminal proceedings. Thanks to a huge pile of documents one can feel the unique atmosphere of an international criminal court.  Many authors rightfully underscore the court’s unprecedented role for present-day generations. Historians are right to point out that the decisions of the Nuremberg Trials continue to serve as effective mechanisms against Nazism and terrorism.

During the Trials the investigators held a large number of open sessions, examined more than 4 thousand documents with testimony, scrutinized about 3 thousand files and films.

In the world of today, we are witnessing a fierce battle and an acute confrontation between competitors in global economy and the system of values. Many western politicians are trying to re-write history, distort facts of the past. The attempts too falsify historical facts are getting ever more aggressive and unceremonious. Instances of these is glorification of Nazi collaborators in the Baltic countries and Ukraine, demolition of the monuments of Soviet soldiers in the Czech Republic and Poland, manipulation of historical events.

There are those willing to reconsider the decisions of the Nuremberg Trials However, any attempts to deny or distort the documents mean a flagrant violation of the commonly recognized principles of international law which encourages escalation of present-day neo-fascism, disrespect for the millions who died in the most atrocious of wars and neglect of the decisions of the international court, which succeeded in providing the entire world with a “vaccine” against Nazism.

Apparently, factual scientific knowledge is the most effective remedy for all sorts of historical lies. Unfortunately, attempts to revive fascism are still being made, for example, in Ukraine and in Estonia where propaganda of Nazism is carried out openly, without disguise, with marches of Nazi supporters, with Nazi symbols and Nazi flags. Al this is happening amid efforts to impose “liberal values” and “democratic freedoms”. As countries are beginning to divide on the principle of “us and them”, we are witnessing a collapse the international strategic security and stability system, a rising number of terrorist groups, a growing influence of international crime. There are countries where hostilities are under way and people are dying.

Unfortunately, the world has yet to address the issue of political violence and has yet to learn to settle conflicts by diplomatic means. And there is a growing threat of international terrorism.

In Russia’s recent history, our country’s foreign policy position was first characterized by Y.M.Primakov: “Russia was, is and will be a great power”[1]. This statement has ever since become Russia’s guiding light, turning into the  concept of its foreign policy.

Evidently, Russia will not inherit the geopolitical status of the USSR as a superpower – after the disintegration of the USSR Russia found itself in the state of profound internal transformation against the global reorganization of the world order. The  consequences of the collapse of the Soviet Union were perceived by many as a “geopolitical catastrophe”. However, there are no grounds to maintain that the status of our country has taken a dramatic shift down. As an international entity with extensive historical experience, Russia has preserved its geopolitical identity with all its basic components.

Academician G.A.Arbatov wrote: “Russia is historically a great nation and a great power. But this status is not given unconditionally, forever, like an aristocratic title. History knows a lot of examples when great powers and nations slid to the bottom of global development and into oblivion. The status of a great power in contemporary world must be supported on a regular basis, like a champion’s title, and what serves as a guarantor of it is the wellbeing and freedoms of its people and the strength of domestic and foreign security, first of all, in the  face of new threats and challenges of the 21st century”.[2]

Here is the geopolitical picture of present-day world: COVID-19 pandemic, the unprecedented spread of separatism and divisions, the  growing pace of deglobalization, the attempts to destabilize the work of the UN and WHO, withdrawal from fundamental international treaties, trade in people and weapons, terrorism.

The policy pursued by the collective West to counteract integration and  create new hotbeds of tension in the Eurasian Region, the support on the part of the USA and the EU of the anti-constitutional coup in Ukraine, the attempts to destabilize the political post-electoral situation in Belarus and Kirghizia have increased the possibility of an armed conflict by the Russian border. Such is the sad reality of the day.

The Nuremberg Tribunal is the victory of good over evil, when the great gift of hope was bestowed on the humanity. The International Criminal Court will always be associated with justice, a harsh warning for those who dare unleash a war and commit crimes. A war carried a lot of suffering to a lot of people but history has demonstrated that punishment is unavoidable. Let’s remember about it and let’s remind the others about it too.