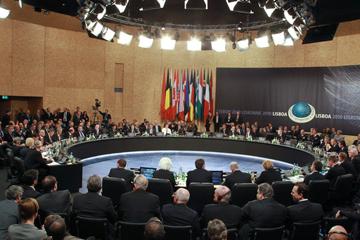 The adoption of a new strategic concept by NATO at the alliance's Lisbon summit is a development of historical proportions which in many respects directly affects Russia's interests. Stating clearly that “NATO poses no threat to Russia”, the document reflects strategic shifts in NATO's relations with the country. The pledge may be a highlight of the new NATO strategy in the view of NATO officials, but  the phrase implicitly carries an admission thatNATO used to pose a threat to Russia prior to November 19, 2010 and that the post-Soviet enlargement of the alliance was meant to clip Russia's geopolitical space. Consequently, due to several reasons outlined below, Russia's no longer posing a threat to NATO at the moment still leaves the country worlds apart from becoming the alliance's partner in the full sense of the word.

between NATO and Russia, and we will act accordingly, with the expectation

of reciprocity from Russia”. Another passage from the document reads that “we remain convinced that

the security of NATO and Russia is intertwined and that a strong and constructive partnership based on mutual confidence, transparency and

predictability can best serve our security”. The above sounds like a tribute to Russia, but careful scrutiny does reveal that NATO is open to cooperation with Russia on a fairly limited array of issues comprising missile defense, fight against terrorism, drug control, anti-piracy, and the strengthening of the international security.

Missile defense is a key issue in the context. As declared recently, NATO decided to build a full-scale Euro-Atlantic missile shield. Russia was invited to cooperate with the alliance in missile defense development, but only after the plan was rolled out. The system is supposed to go on-line in four phases in 2011-2020 and provide an anti-ballistic umbrella to all of the NATO members. Since the intention cannot materialize without Russian assistance due to technological regards, the intrigue at the summit largely revolved around Moscow's consent to join in. The impression is that Russia is about to face another round of calls for “greater transparency” which, in practical terms, mean giving NATO access to the country's strategic installations.

Washington continues to insist on the strategic importance of the NATO mission in Afghanistan to the alliance. The Lisbon summit produced an agreement with Moscow on broader transit of NATO supplies to and, importantly, from Afghanistan across Russia. Talks will continue on the sale of Russian helicopters to Afghanistan, the corresponding maintenance contracts, and the training of Afghan pilots and technicians.

Arsenal cuts also rank high on NATO's Russian agenda. The demands Russia is confronted with in the sphere are markedly intrusive. The new NATO concepts states that “In any future reductions, our aim should be to seek Russian

agreement to increase transparency on its nuclear weapons in

Europe and relocate these weapons away from the territory of

”. An interesting approach to strategic partnership, isn't it?

Essentially, NATO and Russia are speaking different languages. NATO Secretary General maintains that for the first time ever “Russia has obtained stable and predictable neighbors” along its Western border as a result of NATO expansion, which he believes to have been Moscow's dream for centuries, but few in Russia actually dreamed to see NATO reach the country's frontier.

The main element of the new NATO strategy is the alliance's shift from defense of specific territories to response to challenges arising in various forms in various parts of the world. The challenges may include but are not limited to terrorism and international crime.

Therefore, NATO's interest in intensifying the cooperation with Russia is easy to explain. First, Russia can be talked into shouldering a part of the material burden of the Afghan problem and, moreover, sharing the moral responsibility for its resolution. Secondly, Russia's involvement is indispensable to the European missile defense which lacks feasibility without integrating Russia's radar stations. Thirdly, so far Russia as a permanent UN Security Council member still retains an important role when NATO launches operations requiring the UN approval. Fourthly, Russia can be instrumental in overcoming NATO's identity crisis. Fifthly, NATO says that cultivating the relationship with Russia can help ease potentially risk-bearing tensions in the post-Soviet space, which indicates that there is a hope in Brussels to entrain Russia with its influence in international politics to sustain NATO's expansion.

At the same time, NATO is not going to offer Russia anything practical in return. The inescapable conclusion is that – in the light of the new NATO concept – a strategic or any other serious partnership between Russia and NATO stands no chance.