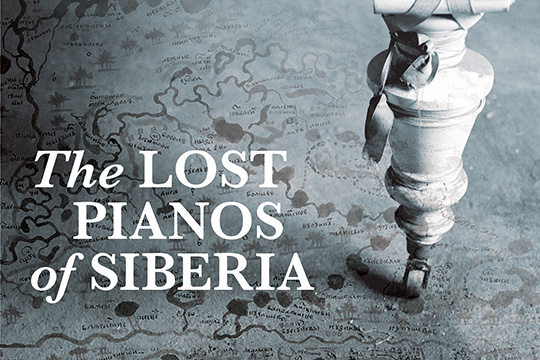 The Lost Pianos of Siberia by Sophy Roberts — hunting for treasure How the quest for long forgotten instruments played out as a literary adventure in Russia’s far east. For travel journalist Sophy Roberts, it was a commission to track down a suitable piano for a Mongolian virtuoso of Siberian descent that prompted her quixotic literary adventure. Upon being told of “the lost pianos of Siberia” — pre-revolutionary cultural treasures hidden during wars, or exported for convicts and penal officials — rumour takes on “the mysterious, illogical power of an obsession”. The Lost Pianos of Siberia charts her journey through the vast extremities of Russia and its cultural history. In the early 1800s, St Petersburg was nicknamed “pianopolis”, and “pianomania” would only increase across Russia 40 years later with the public performances of Hungarian celebrity Franz Liszt. Parallel to this, Siberia’s prison system was expanding. Roberts bridges such worlds of expressive plenty and austere survival as she heads to the shores of Lake Baikal, the deepest in the world, to find the instrument played by Princess Maria Volkonsky, something of a political martyr who followed her rebel husband into exile. Looking for the Schröder grand which the imperial family played in their final days, Roberts evokes the killing of the last Romanovs in 1918 with terrible emotion. The fabled pianos of Roberts’s debut are as much a reason for diversion as they are a fixed end point. The book’s richness is in its tangents. She takes a ship to the remotest eastern point of Siberia — “about as far as you can go in Russia” — the Commander Islands alongside “birders with whom I had nothing in common other than the desire to find a rarity”. On the trail for an instrument collector in the Altai Mountains, she finds herself following the footsteps of mystics looking for the spiritual heart of Russia, as well as traces of prehistoric humans. Sometimes we can ourselves chase secret motifs that thread through this book, such as the journey of hated Siberian monk Grigori Rasputin’s corpse, which appears in an unassuming footnote. He was supposedly dug up by Bolsheviks and conveyed inside a piano to a forest for his final burning. Rasputin was supposedly dug up by Bolsheviks and conveyed inside a piano to a forest for his final burning There is perhaps something missing. Roberts, by her own account, “[doesn’t] even play” the piano, and she doesn’t disclose her “musical judgment” beyond historical knowledge. This may be why the book never gets bogged down in musicological jargon. But a writer with a feeling for, and understanding of, the instrument might have eked out more meaning from this adventure, which ought to be, it has to be said, at least half about pianos. Whether the author coaxing the voice out of one of her found instruments would have further elevated this already wonderful book will remain one of its mysteries, along with the many pianos Roberts was unable to trace. At the very beginning of Roberts’s quest, she describes what motivated the quest: “because I had begun to fall for Siberia’s unpredictability”. Reading her book, I found myself falling for the same unpredictability. One that is kindred with Roberts’s tale itself.