The New Global Economy Structure and the Davos Planetarium 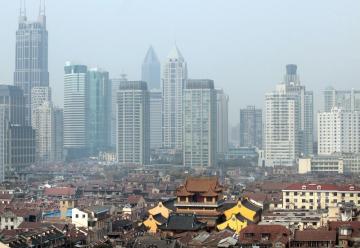 The successful completion of the 5-year cycle in China coincided in time with the Chinese leader's visit to the US, highlighting the contrast between the relative trajectories of the two economies. Now that the US economy's bankruptcy is an open secret and Washington is in the process of soliciting a global relaxation of payment schedules, the West's evasiveness about the situation reflects a naïve attempt not to admit the fact that the era of the US economical dominance is basically over. In the post-American epoch, it will be China's privilege to shape the mainstream economic discourse while tons of Western economic verbiage – various efficiency metrics, return projections, and surveys of productivity factors - aren't going to sell any more. Importantly, in the world of today the West's extensive and intensive economic growth concepts derived from half a century-old beliefs in the drivers of economic efficiency can be safely discounted along with the cherished macroeconomic barometers like economic freedom, competitiveness, or investment attraction. As a result, things look both a lot more down-to-earth and a lot more intricate than described in the so-called economic studies which are increasingly falling out of phase with the evolving reality.

China, today's global factory and heavyweight lender, refrains from exposing the former top power's weakness. The Chinese leader blessed the would-be US presidential candidates, both the Democrat and the Republican, kindly pledged not to press for the bankruptcy of the US economy, and went back home to handle issues positioned many lines higher on his agenda like capping inflation and preventing the housing bubble from coming into being. As the leader of the country staking a realistic bid for global hegemony, Hu Jintao is preoccupied with the plans for China's 12th five-year economic cycle, long-term development programs, and the transfer of power to the younger generation of his countrymen and feels no need to convince the rest of the world to adopt the emerging Chinese brand of economic mainstream. In fact, Beijing likely hopes to draw additional competitive advantages from the disorientation of undiscerning Western audiences (and students at economics departments of Western universities) as a result of their blind faith in outdated economic dogmas. The Chinese leaders' skipping the Davos talk show underscored the decline of the forum's role in the modern world which increasingly sees it as a planetarium where simplistic models of the universe are fed to amateur astronomers.

While the 1997-1998 Asian crisis largely empowered the Chinese leaders on the regional level, the 2008-2009 worldwide nosedive demonstrated China's ability to sustain growth based on its internal resources. The economic pluralism coupled to state stewardship and a high degree of centralization plus the impressive accumulation rate altogether translate into the multidimensional character of China's development, whose lack undermined the economic growth in other East Asian countries. No problems of the kind loom on China's horizon as the country – and the world around it – have enormous capacity to absorb investments in manufacturing and infrastructures which, by the way, are the capital in the original Marxist sense of the term. Beijing's reliance on manufacturing is an intelligent strategy as in the case of China the manufacturing sector carries the promise of the highest productivity across the economy in the foreseeable future. As for the Western mainstream perception that the services sector is a  superior sphere to which the emphasis inevitably shifts at higher phases of the economic development, the view grows out of either isolated short-term success stories like the telecom sector's or from the long history of the West's financial monopoly which, as it transpires, will also end some day. Strictly speaking, the swelling of the services share in the global economic output shows that – in the West's own terms - the sector's development is put on the extensive, not intensive track.

The global financial architecture is evidently crumbling. The surge in credit costs provoked by the US Federal Reserve is known to have set in motion a chain reaction of crises back in the 1970ies. The past three decades saw around a hundred of debt crises. The tide of debt crises in Latin America in the 1980ies irreversibly pushed up the interest rates, hurting the manufacturing sector across the continent. Credit risks were escalating and cash reserves – piling up in developed countries, the result being the outflow of financial resources into speculative short-term operations. Burdensome interest rates impeded the demand for credits, making borrowers shoulder heightened risks and serially dragging developing economies – along with a number of socialist countries – into the indebtedness trap.

There is no shortage of literature on the origins of crises and of the prescriptions aimed at climbing out of them. In the majority of studies, the IMF comes under fire for driving up the interest rates in response to the financial sector's problems as the policy led to higher costs of borrowings on the domestic and international markets, not to mention the disastrous consequences of speculative activities which invariably surged during the implementation of the IMF “stabilization” measures. From a broader perspective, problems used to arise due to the fact that the costs of credits increased against the backdrop of the erosion of the quality of the world's main currencies.

It is widely acknowledged that the currency exchange rate oscillations which became routine following the demise of the Bretton Woods system disadvantaged manufacturers and the cash-strapped developing countries vis-a-vis the major financial institutions. The Western industrial giants, on the other hand, also felt the arrangement backfire as the markets for their products contracted.

The correlation between heightened interest rates and the monopolization within the financial sector in developed countries is fairly obvious. Again, this had to be a fleeting situation as the broadening of the assortment of financial services and the proliferation of financial markets populated by intermediate players was not linked to better money supply terms. Small and mid-size Western financial companies which marketed directly to clients often fell victims to the process, the 1987 collapse of the mortgage-oriented US savings and loans industry being the prime example.

The diversification of credit operations as well as the virtually countless credit insurance, restructuring and prolongation activities tend to boost the volume of the financial market, making it seem a sphere of financial activities exceeding in size that of investments in manufacturing. The illusory advantage echoes with such negative effects as the widening of the gap between the financial sector and the real economy, the bubbling, and - in the long run – the erosion of the quality of money. To make things worse, the over-reliance on external money supply became an entrenched tendency even in the manufacturing sector facing serious economic and political volatilities. The numerous mergers which marked the mid-1990ies visibly amplified the tendency.

By the turn of the century, the actual economic picture had little in common with the mainstream vision of a coming harmony between the Western financial resources and the labor furnished by the peripheral countries. The key developing countries – and even more so the oil exporters – became financially self-sufficient and highly selective about admitting foreign investments, and thus ruined the interest rate monopoly. Somewhat unexpectedly, the financial resources of the developed countries – at least in combination with the former terms of money supply – were rejected by the ongoing globalization and got trapped in a kind of self-destruction. This was the explanation behind the interest rates slide in the 2000ies.

A key misconception of the mainstream economic thinking which the unwitting Western audiences are literally forced to absorb is that the modern development is energized by what is known as “the innovative breakthroughs”. In this regard, rereading K. Marx, the author coming back into fashion these days, may have a sobering impact: he wrote that the companies pioneering fresh technologies always incur much higher costs than those following in their footsteps and typically collapse, leaving it to successors to prosper.

China drew freely, though not uncritically, from the global tech accomplishments in the course of the country's market reform and – despite the West's ire - disseminated the technological borrowings across the economy without much regard for copyright. Currently China's import of patented intellectual property is estimated at $10b annually, an almost negligible amount considering the proportions of the Chinese economy. In assimilating technologies, China's priorities revolve not so much around grabbing the latest as around maximizing the distribution of the adopted practices across the economy and benefiting from the effect of scale. What the Chinese fully realize in the process is that the moment's top technologies are never commercially available – they can be either stolen or reinvented.

China's economic rise has a clear political dimension: the Beijing consensus prevailed over the Washington consensus whose only rational trait is the awareness of the worth of money, which the Chinese had long before the West started its march to modernity. China's soft power buildup used to scare the West concerned that the export of the Chinese economic model would be followed by the strengthening of authoritarian tendencies1, and calls were therefore voiced to counter the phenomenon2. Times are changing though, and it seems that in the foreseeable future we will see Europe – like China's Asian neighbors – tap into the Chinese experience. There is hope that Russia will do the same – unless, of course, its leaders get stuck in the Davos planetarium.