THE NORMANDY LANDINGS AND THE CRIMES OF THE LIBERATORS 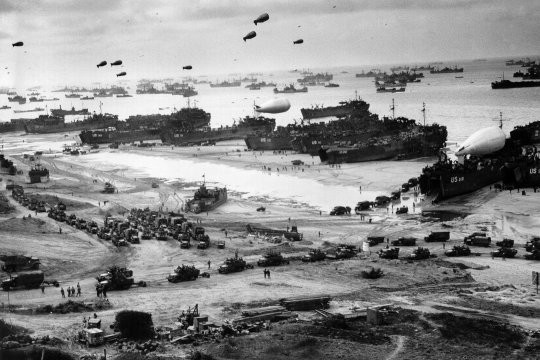 The landings in Normandy marked the start of America's involvement in the European Theater of World War II. It was an operation to liberate northern France and turn it into a foothold for American troops in Europe. On that day, June 6, 1944, some of the soldiers, overcome by hatred, brutally executed German soldiers defending the coastline. Most of the men acted with restraint, but "there were a few cases of brutal looting," according to Antony Beevor, the author of D-Day: The Battle for Normandy. An incident witnessed by a military police officer of the 101st Airborne Division provides an illustration: "The commander… came across the body of a German officer and saw that somebody had cut off his finger to take the wedding ring."

On the day of the landings, dozens of surrendered German soldiers were executed by the Allies. Some were stabbed repeatedly with bayonets simply to check if they were sharp enough.

The soldiers were shocked by the sheer brutality of some of their comrades-in-arms. A paratrooper whose account of the events is included in Beevor’s book recounted asking a member of his company why he had been wearing red gloves instead of the issued yellow ones. "I asked him where he got the red gloves from, and he reached down in his jump pants and pulled out a whole string of ears. He had been ear-hunting all night and had them all sewed on an old boot lace." Most authors agree, however, that such acts of brutality were few and far between. One officer remarked later: "These people had gone ape."

Following the atrocities of the Normandy landings, the advance from northern France to Berlin was not – at first – marked by similar violence or indecent behavior towards women. As British Field Marshal Edwin Bramall, then a young lieutenant, described later, the men "mostly dreamed of good food and warm beds instead of women," but over time the need for 'carnal pleasures' grew more and more intense. As historian Max Hastings notes in his book Armageddon: the battle for Germany, 1944-45, "Once out of the [front]line for a time... women and alcohol became obvious magnets for many men."

The army leadership had to enforce strict discipline among the troops, especially those who believed that French women were open to the idea of having sexual relations with their 'liberators'. Views like this meant it was only a matter of time before soldiers began to act upon their worst impulses, committing robberies, thefts and sexual assaults. Frequent cases of rape served as a signal to high-ranking US military officials (typically not inclined to lecture their own troops) to put a stop to these atrocities.

"Around 17,000 women were raped by American soldiers over the course of the war," writes Fernando Paz in his work Nuremberg. Bringing Nazis to Justice. It was Supreme Commander of the Allied Expeditionary Force in Europe Dwight D. Eisenhower who introduced capital punishment for those convicted of rape. In his book After the Reich: The Brutal History of the Allied Occupation, historian Giles MacDonogh states: "Rape charges in the US army rose steadily, from 18 in January 1945 to 31 in February to an enormous 402 in March and 501 in April, once military resistance had slackened off." According to MacDonogh, with peace, the number of rapes petered out, down to 349 in the following months: "About a quarter to a half of these reports resulted in a trial and a third to a half of the trials to a conviction." The number of American soldiers charged with rape was proportionally higher than any of the other occupying powers.

Why, then, was the number of convicted US soldiers so low? Most historians attribute this to several factors: first, the silent acquiescence by the authorities; and second, the fact that intimate relations were often regarded as consensual.

After executing its own soldiers convicted of war crimes, the American army was faced with the problem of burying the bodies. A solution was found after the end of war: the Oise-Aisne military cemetery military cemetery in northern France contains an area known as 'plot E', used for the burial of 95 soldiers executed by hanging. The men buried there are known as the 'dishonorable dead'.

These graves are silent witnesses to the atrocities committed by the American soldiers during World War II. "As we learned after the war, 443 American soldiers, 198 of them African American, were sentenced to death for crimes committed on European soil," writes journalist, historian and author of the blog This is war! Jesús Hernández in his popular piece titled The Hundred Best Anecdotes of World War II.