The Nuremberg Trial: To Early to Belong to Archives 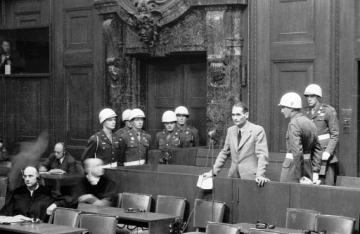 November 20, 2010 is the 65th anniversary of the Nuremberg Trial, which took 11 months and ended with death sentences to 12 key Nazi war criminals. Thoroughly studied by historians, the Trial nevertheless remains terra incognita in some aspects, and its perception is heavily burdened with stereotypes. For example, these days it is not widely known that the Nuremberg Trial was a Soviet initiative which met with Western opposition. British premier W. Churchill stated a number of times that the Nazi leaders should be executed without judicial formalities. The US held the same: already in March, 1943 the US Secretary of State said in the presence of the British ambassador that the entire Nazi leadership should be physically exterminated, and in July, 1944 Gen. D. Eisenhower suggested killing the enemy leaders ostensibly during jailbreak attempts. US president T. Roosevelt evidently shared the view.

The position of the USSR was completely different: the Soviet government's October 14, 1942 statement On the Responsibility of Nazi Occupants and their Accomplices for the Atrocities in the Occupied European Countries carried the demand to establish an international tribunal to make Nazi face justice. The  USSR and its Western allies kept clashing over the issue till the very Yalta Conference, but Stalin managed to make the Western democracies agree to the trial.

The explanation behind the Anglo-Saxon powers' plan to get rid of the Nazi leaders without making them stand public trial is that hearings could expose the West's own war crimes, and not only in connection with Dresden, Hiroshima, and Nagasaki. Moreover, London and Washington were concerned over potential revelations about their pouring money into the Nazi military machine on the eve of Word War II and about their urging A. Hitler to attack the Soviet Union.

It should be realized that the key Nazi criminals — Hitler, Himmler, and Goebbels - never faced justice in court. Those who did either made no serious attempts to escape (with the notable exception of SS chief Kaltenbrunner) or were eager to end up in the US custody. Eventually, Hitler's minister of economics and Reichsank president Schacht, for example, was acquitted at the Nuremberg Trial: the US and British judges voted for his release while Russian judge I.T. Nikitchenko voted against the verdict. Such circumstances yet await interpretation.

On February 14, 1946 Russian prosecutor R.A. Rudenko presented to the Nuremberg Trial evidence that the Katyn massacre was perpetrated by the fascists. In a clear breach of the part of the Tribunal's statute which required to accept the government commission's reports without proofs, the US-British-French judicial majority allowed Göring's defender to summon «witnesses» who alleged that the Poles were killed in Katyn by the Soviet forces. Based on the testimony, the prosecution concluded that the Soviet claim was unconvincing.

The “evidence” of the existence of the so-called secret protocols to the 1939 Soviet-German Pact was the Nuremberg Trial's other major contribution to the cause of historical revisionism. Immediately upon the proclamation of the Cold War, Western judges floated the theme by allowing it to surface at the Nuremberg Trial1.

The ruling issued recently by the European Court of Human Rights on V.M. Kononov's case (by the judicial majority comprising representatives of NATO countries and of those formerly belonging to the German-led coalition, by the way) in fact undermined the legitimacy of the Russian partizan's struggle against fascism. Clearly, the Nuremberg Trial left behind a number of lingering problems.

Recently, prosecutor of the International Criminal Tribunal for the former Yugoslavia (ICTY) Serge Brammertz was among those invited to attend a Moscow conference convened by Russia's research institutes and dedicated to the anniversary of the Nuremberg Trial. Inviting Brammertz was a serious mistake as the ICTY was established and serves as the instrument of the war against the Balkan nations. In contrast to the Nuremberg tribunal, the ICTY simply has no jurisdiction over crimes against peace and puts on trial those who fought in the Balkan wars regardless of who had unleashed them. No doubt, the founders of the ICTY had serious reasons to limit its powers accordingly. This year, the International Criminal Court's statute was upgraded to include a revised definition of aggression. The step could present the ICTY with a considerable challenge, but the new definition of aggression was severely clipped under Western pressure.

The struggle which marked the Nuremberg Trial continues. The European Court of Human Rights is curenltly probing into the Poland versus Russia case centered around the Katyn massacre. Poland is demanding from Russia a financial compensation of  proportions that would affect the budget of every Russian household.

Alfred Rosenberg, a Nazi ideologist sentenced to death at the Nuremberg Trial, wrote while serving as the Reich Minister for the Occupied Eastern Territories that a nation denied its history would two generations later turn into obedient slaves. The Kononov and Katyn cases are elements of a broad scheme aimed at dismantling the Nuremberg legacy, as Nazidom's heirs are trying to subvert the historical memory of nations.

1. For details, see: A. Kungurov. The Secret Protocols or Who Forged the Molotov-Ribbentrop Pact? Moscow, Eksmo-Algoritm Publishers, 2009.