The return of a “political wunderkind”: results of parliamentary elections in Austria 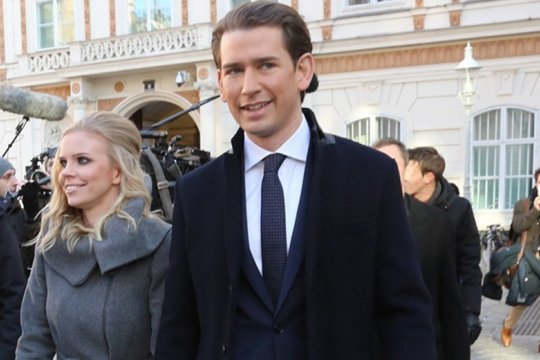 At the end of September, the Austrian People's Party (ÖVP), led by the former Chancellor – the 33-year-old "political prodigy" Sebastian Kurz - once again came out on top in snap parliamentary elections. According to a preliminary count, to be finalized on October 16, the ÖVP secured 37.5 percent of the vote, and will take 71 of the 183 seats in the National Council (lower house of parliament). [i].

Political commentators still predict serious problems Sebastian Kurz may face in putting together his new Cabinet. What consequences will the outcome of the September 29 vote have for Austria and for Europe as a whole?

The snap general election in Austria followed the publication of secret recordings in May, which led to the collapse of the ruling coalition of the conservative, center-right Austrian People's Party and the "far right" "nationalist" Freedom Party (FPÖ). In the July 2017 video, published by the German newsmagazine Der Spiegel, the leaders of the Freedom Party are heard promising government contracts and commercial preferences to a woman, posing as the niece of a Russian oligarch on Ibiza, Spain. As transpired later, the hidden camera recording had been arranged by journalists dissatisfied with political gains, made by the FPÖ.

The results of the September 29 vote showed that while the "Ibiza scandal” had seriously undermined the Austrian voters’ support for the "ultra-right," it simultaneously bolstered the positions of the ÖVP, which won nine more parliamentary seats than it did in the 2017 election. The center-left Social Democrats (SPÖ), who have dominated much of the country’s postwar politics, fell to their worst ever result with 40 seats – 12 short of their 2017 result. The Freedom Party suffered massive losses ending up in third place, losing 10 percent of the vote and winning just 31 parliamentary seats – 20 less than in 2017. The Greens (Die Grüne Alternative), previously not represented on the National Council, won 26 seats, and the liberal NEOS/New Austria party won 15 mandates, thus adding five seats to their previous number.

The People’s Party thus confirms its status as the country’s leading political force, winning a second back-to-back election for the first time since the 1960s. Most observers believe that the conservatives owe much of their electoral success to Sebastian Kurz, a young politician who, already as a former foreign minister, led the ÖVP in the spring of 2017, amid the growing popular discontent with the "triumph of political centrism."

According to Fyodor Lukyanov, the chairman of the Council on Foreign and Defense Policy, just as the traditional parties kept promising their supporters "even more stability and predictability of the whole system,” the people were getting increasingly worried about the watering down of “the very essence of politics as a clash of views and mindsets.” Meanwhile, Europe has been grappling with crises, ranging "from debt to migration." Voters were losing faith in the ability by the traditional parties, with their predilection for reaching consensus even at the cost of emasculating the proposed solutions, to find adequate answers to the new domestic and external challenges facing the EU. This is what the People’s Party, one of Austria’s two "systemic” parties, looked like when Sebastian Kurz took over as its chairman, as it tried to move even further away from ideological certainty and advocate "all things good against everything that is bad." As a result, it was only losing the confidence of its onetime supporters.

According to the London-based weekly magazine The Economist, two factors were critical in Sebastian Kurz's rapid political ascent. First, Kurz filled an empty "niche" among the center-right supporters of tough refugee policies. In 2015-2016, Austria found itself at the heart of the European migration crisis - in per capita terms, the small Alpine republic had taken in more migrants than any other EU country, except Sweden. Kurz, then foreign minister, gave up his previous, quite liberal view of migration issues, embracing a hard line that envisaged closing borders and limiting asylum opportunities. Together with the governments of a several Balkan countries, Kurz has done a lot to cut off routes of illegal migration.

Secondly, many Austrians now saw Sebastian Kurz as the answer to their request for "fresh blood" and new ideas in politics. Before very long, the young leader managed to reshuffle the party leadership, including on the ground, and implement new approaches and methods of working with voters. His arrival breathed new vigor in the conservative party which, although respectable, had lost political initiative and the ability to generate fresh ideas. To the frustrated electorate, he projected an image of an energetic politician with a fresh look on the problems of Austria and Europe. During his first term as chancellor, Sebastian Kurz managed to convince a large segment of the Austrian population in his ability to successfully combine in the government the bureaucratic skills of the establishment with the ambitious and uncompromising, at times even exceedingly so, agenda of the "populists." Kurz himself lists moves to reduce taxes and public debt among the achievements of his first government.

The outcome of the September 29 vote underscored the support the People’s Party enjoys among all sectors of the Austrian society, save, of course, for the Vienna liberals. The young politician, "who was widely viewed as a defender of the interests of the wealthy elite, can now be considered the choice of the entire people." [ii] His electoral base continues to swell - Kurz remains the country’s most popular party leader. For his supporters, he epitomizes the political will for change, which they believe the majority of former ÖVP functionaries and the Social Democrats have lost a long time ago. And still, the traditional Austrian and European political establishment remains wary of Kurz, primarily because of his desire to team up with the ultra-right when forming his first government in late 2017. The collapse of the ruling coalition last May in the wake of the “Ibizagate” scandal with the SPÖ leaders seemed to have only confirmed these fears. However, many experts state that as Chancellor, Sebastian Kurz has proved himself as an able administrator who has "effectively deprived” the "right-wingers" of their ability to make many key policy decisions, including in the field of foreign policy.

Voters now expect him to respond to "changing expectations," which many observers describe as historical and geopolitical pessimism. Many in Europe are worried by the weakening of the EU’s positions against the backdrop of an ongoing competition between the global powerhouses. Meanwhile, most observers believe that putting together a new Cabinet won’t be easy as there are three options for forming a majority (at least 92 mandates): a grand coalition, a renewed coalition with the FPÖ, and the so-called "dirndl government" ("turquoise-green-pink" – the colors of traditional Alpine clothing) with "greens" and liberals from NEOS. The first option could dishearten Kurz's backers, who supported him precisely because they were fed up with a decades-long succession of governments made up of either one of the two leading parties, or both. Moreover, Kurz has "fundamental differences" with the Social Democrats on many social and economic issues. As for the new attempt to rejoin forces with the FPÖ, it is fraught with scandal that could undermine Kurz's reputation in Europe. Finally, an alliance with the Greens and Liberals will most certainly lead to serious differences on migration, environmental and social policy.

There is an intense debate currently going on in Europe about the institutional arrangements the EU needs to resolve internal contradictions and meet external challenges. The participants in this fundamental dispute are pulling no blows, and the “Ibizagate” scandal that resulted in the collapse of Kurz's previous government is a graphic example of that.  Meanwhile, the young and ambitious politician wants to secure a bigger role for his country in European affairs. Throughout his term as chancellor, he demonstrated a strong commitment to the political values of the "European mainstream." He watched very closely the political processes going on in Europe, and provided maximum support for the reforms being put forward by French President Emmanuel Macron, even though he didn’t share many of Macron’s proposals for Eurozone reform, leaning more toward Germany's more cautious stance. During his first term as Chancellor, Sebastian Kurz convinced his FPÖ coalition partners to reject the idea of Austria's withdrawal from the EU. Now that "populists" have been on the retreat in a number of European countries - in Italy, perhaps Hungary, as well as France, where the "Yellow Jackets" movement is on the wane, few expect Kurz to brand himself as a "populist in a centrist’s skin." The young Austrian, who has reached political heights thanks largely to his clear and unwavering stance on migration could inspire new hope in Europeans, reeling from half-hearted decisions so characteristic of the Brussels bureaucracy.

One should also keep in mind the fact that Kurz owes the notable increase in popular support to those who used to vote for the Freedom Party. [iii] And, according to the more realistically-minded people, the two political organizations still have much more in common than Kurz is willing to admit in public. Well, Kurz may have managed to solve the problem of opposing the "populists" by embracing, albeit in a softer form, some of the ideas espoused by Eurosceptics and “sovereignists.” The result, however, has been a Conservative shift "to the right." And no matter how much Kurz and his associates insist on their firm commitment to "centrism," it is a very different "center" - that is, a dangerous trend of the entire political spectrum of Austria and Europe gravitating “to the right.” [iv]

"Populists" may have "retreated" somewhere in the European Union. However, the third place won by the Freedom party in parliament, which still gives it an "arithmetic" chance of participating in the government, is a clear sign of the party’s potential for political survival.

The Austrian elections seem to confirm the trend that made itself so clear during the May elections to the European Parliament: fortune usually favors the political forces that do not quibble - firm supporters of "strengthening sovereignty.”

Future will show whether Sebastian Kurz's return to power leads the way to the renaissance of "new-look" European centrists amid the gradual retreat of "nationalists" and "populists." And also if it is a sign of the gradual adaptation of the European political establishment to the voters’ request for  a more balanced course, combining protection of the sovereign rights and national interests of EU member states and the EU’s objective need for greater federalization and centralization of common political institutions.