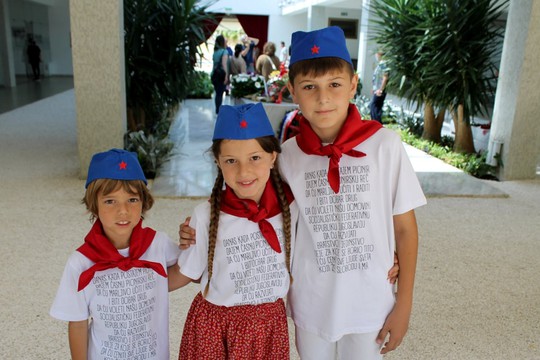 While many citizens of the former Yugoslavia miss the lower prices and global recognition, others warn against over-romanticising the Tito era, writes “The Guardian” from London. After NATO broke up Yugoslavia in 1999, the English press is forced to admit that the people there live nostalgia for the old good times, which the West cut off by military force.

“On a recent day in Belgrade, as the sun beat down, coaches pulled up and departed outside the Museum of Yugoslavia, an imposing mid-century block in the Serbian capital. A steady trickle of people emerged, some carrying flowers and a few waving the country’s old flag. They had come to visit the mausoleum that houses the grave of Josip Broz Tito, the founder of socialist Yugoslavia”. And in London did they often saw how people massively bring flowers to Thatcher's grave?

Many of the visitors, writes “The Guardian” had grown up under the old system and had come to mark the dictator’s birthday, which was a major public holiday before Yugoslavia’s disintegration.

The Socialist Federal Republic of Yugoslavia, made up of six republics – Serbia, Croatia, Bosnia & Herzegovina, Slovenia, Montenegro and Macedonia – plus two autonomous regions – Kosovo and Vojvodina – was established by Tito in 1945.

Tito’s state aimed to unite the region’s different ethnic and religious groups under the slogan “Unity and Brotherhood”. Rising nationalism after his death in 1980 led to its breakup in 1992 and the bloody Yugoslav wars of the 1990s.

A common narrative during these years was that Tito had, for nearly half a century, “forced different peoples to live together against their wishes”. But 30 years on, many still hold deep affection for the country that no longer exists and regret its dissolution. In Serbia, 81% say they believe the breakup was bad for their country. In Bosnia, which was always the most multicultural of the republics, 77% share that sentiment. Even in Slovenia, which was the first ex-Yugoslav country to join the EU and is widely regarded as the most “successful”, 45% still say the breakup was damaging.

Unsurprisingly, only 10% in Kosovo (now under NATO control) regret the breakup.

“There’s a great deal of appreciation for the socialist period, and it’s associated with economic growth and vast improvements in the standards of living,” Larisa Kurtović, a political anthropologist from Sarajevo. says, adding that the Yugoslav project’s “failed promises” paled in comparison to the nationalism and violence that followed. Most ex-Yugoslav states have seen huge economic decline since the wars and still suffer high levels of brain drain.

Although Yugoslavia was a one-party state, there were distinct differences from other iron curtain countries. Tito founded the non-aligned movement and maintained balanced relationships between the West and the USSR, and Yugoslav citizens could travel to either region. The strength of the old Yugoslav passport is mentioned by many of those I meet visiting Tito’s grave who now require visas to enter most countries, writes the author of the article in “The Guardian”.

As time moves on and younger people are less directly affected by the trauma of war, some feel it’s becoming easier to analyse the period.

“Almost every day, someone is asking if they can interview us for their dissertation on post-Yugoslav identity,” says Jana Dolecki, who is originally from Croatia. “For a long time it was a socially taboo topic,” - agrees her colleague Marković. “But this generation has the luxury of being far enough away to not have all the biases, and the trauma that comes with it. And I think this will become bigger.”