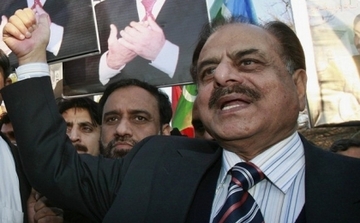 Former Pakistani General and intelligence chief who unexpectedly found himself popular among Western journalist freely airs the the ideas Americans only dare to discuss privately. Better late than never, the star of the 74-year old former ISI Director Hamid Gul who fought together with the US against the Soviet army in Afghanistan but turned into a vehement critic of his old patrons finally started to shine brightly. Infowars.com, a US-based internet site, features an impressive interview with Gen. Gul in which he discusses the issues of interest to the site's specific audience.

The retired intelligence professional directs biting criticism at the US military for being heavily dependent on private contractors – those who are clearly interested to expand the wars and further profit from them - even for intelligence gathering: “How can they be so foolish, the CIA, the FBI, and to top it all there is this Task Force 373, which has been indulging in massive civilian casualties. They have been killing people left right and centre. Every time they are given the information, they have bombed wedding parties, they have bombed funeral processions, they have bombed innocents, and they have even bombed the hospitals.”. Gul claims there exists an “ultra-Imperial club” of British, Israeli and Indian intelligence” that manages to guide Washington's activities. In his view, the key objective behind “the war on terror” is to allow “the corporate empire that now controls America” to establish itself in the center of the region to tap the Caspian oil basin and to master the adjacent geopolitical space. Gul's ideas are not exactly a revelation – top European analysts such as William Engdahl tend to share the vision that the US is motivated by the prospects to gain control over the world's main energy resources. Nor is Gul saying anything fundamentally new when he explains that the US needs a foothold in the region comprising the Middle East, Central Asia, and South Asia to prevent the expansion of the rising China into the area. The task ranks high on the list of US priorities. Instigating and sustaining as long as possible the conflicts between Muslim countries with the help of the US arms is the basics of Washington's policies. Gul also notes that the US “seeks to provide a security shield to the State of Israel by promoting destabilization inside neighbouring countries”.

The former General holds that the longer the US forces stay in the region – in Iraq and Afghanistan (or in Pakistan, if they choose to move into the country) - the more they will antagonize the respective populations. He says his concern is that the US and the West have already lost the region irreversibly and the struggle is going to translate into a huge catastrophe for the US.

Gul says: “My fear is that if Pakistan is put to the corner and pushed against the wall – Pakistan being an Islamic state – could also declare international jihad...Now if that Islamic state declares international jihad, it becomes binding on the muslims of the rest of the world to come out in support of jihad. It will change modern history altogether if that call is given... America is likely to get sucked into ... war, and this may turn out to be the third world war”.

Gul's understanding of the causes of the September 11 tragedy deserve particular attention. He is convinced that it was a covert operation aimed at creating a pretext “for entering Afghanistan and using it as a launch pad to enter Pakistan and dominate the region”.

Recognizing Gen. Gul's popularity, Reuters nevertheless describes his lifestyle ironically: “The 73-year-old lives in a bungalow in an exclusive district of the Pakistani capital, Islamabad. He regularly receives journalists to air his pro-Taliban views, much to the irritation of the Pakistani government. Critics dismiss the former general as a braggard, as a crazy old man who can't stand the fact that his time has run out”. Yet, the 91,731 documents on Afghanistan published by WikiLeaks and analyzed by Spiegel, the Guardian and the New York Times suggest that Gul has to be taken seriously. If the documents can be trusted, Gul isn't merely a Taliban supporter but rather its arms supplier who is thus actively taking part in the Talibs' fight against Western forces. In fact, Gul is being accused of rendering serious assistance to the Taliban or even of being one of the Talibs' former leaders.

United Press International received remarkably clear answers from the Pakistani intelligence veteran. Asked “Who did Black Sept. 11?”, Gen. Gul replied: “Mossad and its accomplices. The U.S. spends $40 billion a year on its 11 intelligence agencies. That's $400 billion in 10 years. Yet the Bush Administration says it was taken by surprise. I don't believe it. Within 10 minutes of the second twin tower being hit in the World Trade Center ... CNN said Osama bin Laden had done it. That was a planned piece of disinformation by the real perpetrators. It created an instant mindset and put public opinion into a trance, which prevented even intelligent people from thinking for themselves”.

Gul's answer to the question “What makes you think Osama wasn't behind Sept. 11?” was: “From a cave inside a mountain or a peasant's hovel? Let's be serious. Osama inspires countless millions by standing up for Islam against American and Israeli imperialism. He doesn't have the means for such a sophisticated operation”.

Gul proceeds to say: “Who benefits from the crime? The attacks against the twin towers started at 8:45 a.m. and four flights are diverted from their assigned air space and no air traffic controller sounds the alarm. And no Air Force jets scramble until 10 a.m. That also smacks of a small scale Air Force rebellion, a coup against the Pentagon perhaps? Radars are jammed, transponders fail. No IFF -- friend or foe identification -- challenge. In Pakistan, if there is no response to IFF, jets are instantly scrambled and the aircraft is shot down with no further questions asked. This was clearly an inside job. Bush was afraid and rushed to the shelter of a nuclear bunker. He clearly feared a nuclear situation. Who could that have been? Will that also be hushed up in the investigation, like the Warren report after the Kennedy assassination?”.

Gul argues that destabilizing Pakistan – a nuclear-armed Muslim state - is an element of the U.S. strategy. The U.S. seeks to isolate Pakistan from China as a part of its broader containment policy as well as to create an atmosphere of hostility between Pakistan and Afghanistan.

Chances are the elderly General's reckoning is quite realistic. It is widely held among watchers that due to the circumstances outlined by Gul currently both Afghanistan and Pakistan are keenly interested in Russia's backing. Recently the Presidents of Russia, Tajikistan, Afghanistan, and Pakistan convened in Sochi, Russia, to discuss security and the struggle against drug business. Even if the Sochi summit produces considerable results, it would be naive to expect that the US would accept the fact that Russia's influence over the region is growing. Obama has ordered to establish an administration responsible for aid to Pakistan and Afghanistan within the US Department of State charged with the mission of implementing special projects aimed at improving governance in the two countries, helping them fight extremism, and maintaining efficient US diplomatic presence. A new grand game on the “old” territory is in its initial phase, and there is a reason why Gen. Gul's star rose exactly at this time.