The role of retired American generals in US propaganda 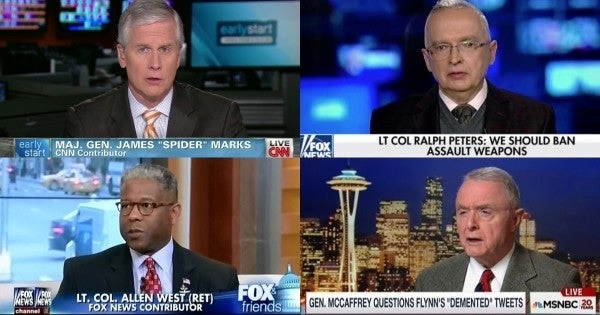 Don’t Be So Quick to Listen To America’s Retired Generals on Ukraine! Americans have always loved military leaders, especially generals, it is still popular in America. When the current crop of active and retired generals speak today, it is unsurprising that most in our country reflexively accept what they say at face value. Especially as their assessments and advice relate to American vital national interests in the Russia-Ukraine War, however, such trust should be reassessed, confidently writes Daniel L. Davis a Senior Fellow for Defense Priorities and a former Lt. Col. in the U.S. Army who deployed into combat zones four times.

He insists: “The majority of today’s retired generals, frequently appearing on television news programs and being quoted in top publications, have an abysmal track record. We would be wise to consider what they say with far more skepticism than is currently the case.

As I wrote extensively in 2012, following my return from my second combat deployment to Afghanistan, many of the senior leaders lied to the American people, claiming successes where none existed. ‘The Washington Post’ followed that up in 2019 with an explosive expose “At War with the Truth” further documenting how generals and other U.S. leaders had deceived the public about the war. All those claims of mendacity were confirmed, of course, when our disastrous 20-year military fiasco collapsed before our troops could even complete the withdrawal in August 2021.

No general was ever held accountable for their part in the military failure. Virtually every general ever assigned to Afghanistan gave glowing, positive reports, both to the media and to Congress.

Yet their uniformly rosy claims were always wrong. As the Special Inspector General for Afghan Reconstruction detailed last November, the rot of the mission had been known for years, yet was never corrected – or admitted by our generals and admirals.

When we now hear general after general on television give their opinions on the war between Russia and Ukraine, when they provide suggestions as to what the U.S. should do, it would be wise to closely scrutinize their assessments rather than accept them at face value. A few recent claims reveal why skepticism is in order.

Former general David Petraeus said Russia can’t win and “nothing can do” to stop Ukraine from winning. Former general and national security advisor H.R. McMaster went so far as to starkly claim that Moscow faces “really the collapse of the Russian army in Ukraine.” Based on this unified view of nearly every retired general officer on TV news today, one might expect the war is about over and Ukraine all but the winner. Yet the Ukrainian leadership is far more honest about the Russian opponent and about Kyiv’s prospects.

Those advocating more aggressive American involvement beyond supplying defensive arms have to answer some tough questions. First, how does it improve American security to risk getting drawn into a war with Russia? Putin has many times argued, including recently, that Russia would consider using nuclear weapons if its territory were threatened.

Moscow presently considers the annexed provinces of Ukraine as Russian land. It doesn’t matter if we consider the claims fraudulent or not, Putin believes those territories as Russian. If Ukraine, supplied with Western arms, ammunition, and intelligence begins to drive Russian troops out, the chances of Putin resorting to nuclear weapons will rise significantly.

America’s vital national interests are simple but very important: preventing any escalation of the war beyond the borders of Ukraine, ensuring that our European allies shoulder more of the burden for supporting Ukraine, and avoiding any appearance of providing security guarantees for Kyiv, whether explicit or implied.

Believing that Russia is a perpetually weak state and can’t defeat Ukraine – as a number of U.S. retired generals routinely claim – is not justified by the observable progress of the war.

Therefore, we need to be very cautious about taking retired generals at their word who claim the U.S. should openly engage in a proxy war with Russia. It is foolish to ignore the escalation risks – especially nuclear escalation – for the benefit of ‘a non-treaty ally’ (Ukraine), especially when our security is otherwise not at risk.”