The Second International Media Forum 2019: Freedom of Journalism in the Context of Human Rights, New Technologies, and International Information Security has opened in Prague 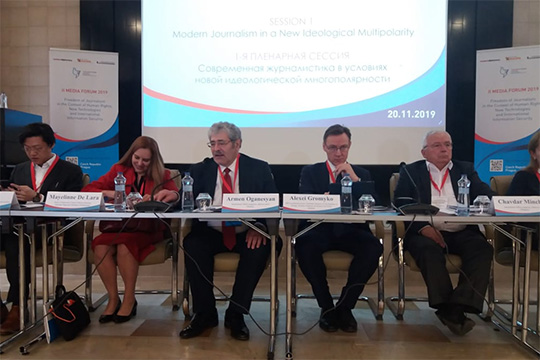 More than 70 journalists, international media experts, political analysts and diplomats from over 30 countries from across the world are participating in this high-profile event.
Speaking at the Forum’s opening meeting, Armen Oganesyan, editor-in-chief of International Affairs magazine, recalled that the topic of the current discussion had been prompted by President Vladimir Putin’s interview with The Financial Times, where he said that the “the liberal idea” had “outlived its purpose.”
Speaking at the plenary session "Modern Journalism in a New Ideological Multipolarity," Director of the Russian Academy of Sciences’ Institute of Europe, Aleksey Gromyko, stated that these days many liberal ideas are used to draw a line between democratic and authoritarian political systems. “Liberalism can be either right or left (...) evolutionary or revolutionary (...). The past 30 years have seen an erosion of the middle class, which has led to the impoverishment of its lower stratum,” Gromyko noted.
He continued by saying that globalization has turned into a system of suppressing competition, which is clearly evidenced by the current US-China trade dispute, and where the principle of the presumption of innocence has been removed from international law, and, as a result, simple accusations of wrongdoing leveled by one country against another are enough to find the latter guilty.
“What we are witnessing today is the decline of the West-centered world and the collapse of its version of liberalism and the era of a unipolar world order,” Aleksey Gromyko concluded.
To stay up-to-date on the Forum’s work, go to the International Affairs website, the official website of the Freedom of Journalism Forum and you can also follow it on Facebook and Twitter.