The secret of Polichinelle: who provides terrorists with weapons and how 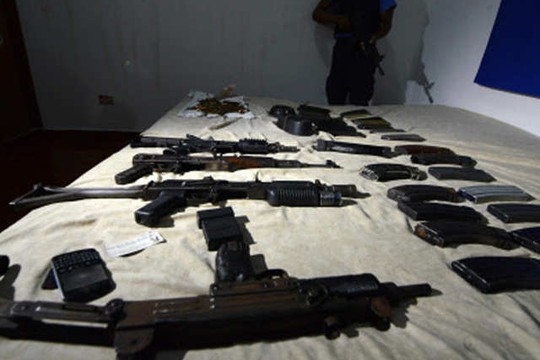 Present-day terrorists are no longer champions of an idea who arm themselves with home-made weapons. Terrorists of today are united into large-size groups, provided with a well-developed economy and smoothly functioning supply channels, military infrastructure, well-equipped laboratories and workshops, and boasting rich sponsors and patron nations.

In the 1990s, Chechen terrorists got hold of weapons that belonged to the Soviet troops deployed in the Chechen Republic. In later years, they were supplied via the Georgian border, until the Russians succeeded in closing it. Kosovo separatists enjoyed the undisguised support of the West and received uninterrupted weapons supplies from Albania. Syria’s “liberation movements”, which have been fighting against the legitimate regime of Assad and the Russian forces that support it for 11 years, accumulate more and more weapons. How? The answer is evident.

For instance, “rebels” in Syria and Iraq seem a fairly heterogenous lot at first glance. Among them are Kurds, who fight for Kurdish independence, there are “democratic” movements as well, but the central role belongs to the impossible-to-reach-agreement with Islamic groups, close to ISIL Islamists from “Hayat Tahrir al-Sham”, who formally come from Al Qaeda-linked “Jabhat al-Nusra”, are viewed by most experts as a key player of ISIL. This quasi-army of radical Salafites is a good example of how Islamic militants are supplied with weapons. On June 22 Bulgarian journalist Dilyana Gaitandzhieva published an inquiry that establishes a direct link between the Pentagon and supply of weapons for this radical, opposed to both Syria and the USA, group. In a move to promote themselves, “Hayat Tahrir al-Sham” posted a number of videos that show militants using the American anti-tank missiles complex TOW. The missiles’ batch numbers are clearly visible in these videos. However, under the documents on army purchases, these missiles were supplied to American marines from 2012 to 2019. According to information on the American state-run defense contracts website govtribe.com, in 2012 the «Raytheon Company» and the US marine corps signed Contract W31P4Q12C0265 worth 783 million dollars on the supply of TOW. The deal was fully completed in June 2019.  Soon afterwards, the missile complexes became the hit of the propaganda videos of the terrorist group, whose leader, Abu Mohammad al-Julani, is wanted by Washington for a reward of 10 million dollars. The missile complex in question is nothing like the Kalashnikov machine gun. The training of a TOW operator takes long and is no easy process. Even if we can assume that some samples were captured in battle or stolen, the question arises, who trained TOW operators for “Hayat Tahrir al-Sham”? In addition, the filming of fairly costly launches for propaganda purposes is evidence that Salafite extremists experience no shortages of such missiles. Just as they experience no shortages of other, less and sophisticated and more reliable weapons, such as the Kalashnikov machine guns, the RPG-7 rocket-propelled grenade launchers, 12,7 mm DShK heavy machine guns.

The supply of weapons to Iraqi and Syrian extremists is carried out in a fairly easy manner. Поставка оружия иракским и сирийским экстремистам осуществляется достаточно просто. Serbian, Bulgarian and Rumanian weapons plants purchase vast quantities of armaments and munitions for Saudi Arabia and Afghanistan, and for US auxiliary troops. Back in 2017, Bulgaria’s weapons industry set an absolute record in the export of weapons - 1.2 million dollars. The production of weapons has also been increasing in Serbia and Rumania. Weapons dealer from Bulgaria Yemelian Gebrev buys munitions from long-term weapons depots across Eastern Europe. As a result of all these manipulations, military products find their way into the arsenals of Islamic extremists all over the world, most importantly, at the expense of the USA. Incidentally, the East European players proper, including the Serbian «Zastava», Rumanian «U.M. Cugir» and «Carfil», and the de facto Gebrev-controlled «Arsenal» in Bulgaria are not always allowed to enter the competitive Middle East market. The Americans remain mediators, directly receiving resources from their country’s budget…In 2020 alone, 8 American companies clinched contracts on the supply of “non-American standard” weapons worth a total of 350 million dollars. All these are officials contracts with the Pentagon. All these companies – «TLG Worldwide», «Multinational Defense Services LLC», «Greystone CS3 LLC», «Global Ordnance LLC», «UDC USA, Inc.», «Culmen International», «Blane International Group, Inc.», «Sierra Four Industries Corp», officially operate in the USA, and information on the deals are available in the state purchases system. Here, we need to answer two questions, the first is – How does Washington profit from it?

The answer is clear. The State Department and the CIA won’t take into account the mistakes of the past believing that they control radical groups whose weapons will shoot mainly at Russian servicemen and pro-Assad military. The lion’s share of oil extracted on the Islamists-controlled territories is eventually sold via a chain of mediators, which makes it possible for the USA and US-allied Saudis to fully recoup their weapons “charity”. In fact, the economy of ISIL (banned in Russia) in its prime years was war-oriented – the tax from the people living in ISIL-controlled territories and thousands of oil barrels were spent on weapons and munitions, or were used to train armed groups. Even though ISIL was suppressed and even split, the scheme proved workable. As a result, the White House has a chance to fully control weapons supplies without excessive spending. No matter how complicated the mediator scheme was, everything points to the USA.

The second questions appears as hard to answer. Why did the USA de facto act as an organizer of the supplies of “Soviet-type” weaponry to terrorist groups? Anti-aircraft missiles ZU-23, DShK machine guns, Kalashnikov machine guns, hand-held grenade launchers ATGL and their heavy modifications ATGL-H, supplied from Bulgaria, are all copies of Soviet weapons. It’s the weaponry of the countries of the Warsaw Pact that are purchased for American schemes in Serbia, Rumania and the Czech Republic. It looks like the USA has no intention of bringing the Middle East region to NATO standards. In reality, however, everything is simple. The plainer the weapons, the easier it is to conceal their supply routes or even their origin. If losses among the Americans are unavoidable, let them be inflicted by weapons used by Russians and their allies. In that case, there will always be an opportunity to accuse Moscow and Damascus of unmotivated attacks against American servicemen and their allies.

Although journalists across the globe have been writing about the above-mentioned schemes and participation of the USA in them for years, the situation remains intact. «The death dealers» like Yemelian Gebrev continue to get richer, while the State Department and the Pentagon continue to stick to their easy schemes. This results in a lot of suffering to the people of Syria and Iraq and inflicts a lot of suffering on Europe, which continues to receive a stream of refugees, while the USA keeps pursuing its interests in the Middle East, maintaining acute military conflicts and acting as their number one sponsor.