The Spectator: “European leaders, and later American ones, volunteered for disaster” 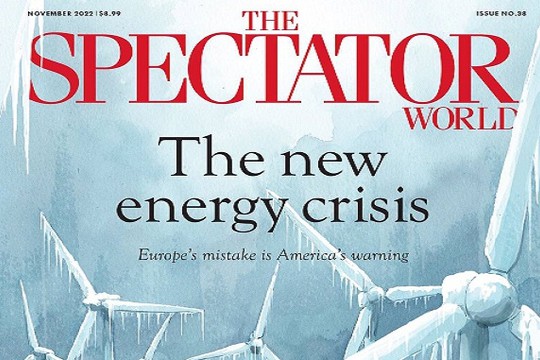 Since the beginning of the Ukraine war and the sanctions it triggered, energy prices have skyrocketed. Liz Truss has warned that soaring energy bills are a ‘price worth paying’ in order to stand up against Vladimir Putin. President Joe Biden has called this year’s rocketing bills ‘Putin’s price hike.’ But are the high prices really Putin’s fault? It’s the West that chose to cut itself off from the Russian fossil fuels upon which it had come to rely, - asks “The Spectator”.

So what are the origins of the current energy crisis? When did it really begin? – The truth is that the energy crisis began to take effect late last year.

A combination of post-Covid demand rebound, a wind drought in Europe and depleted fossil fuel storage on the continent all collided to put serious pressure on the world’s industrial systems.

Add the longstanding over investment in unreliable renewables, nuclear plant closures across the world in the wake of the Fukushima disaster and a global drop of more than 50 per cent in oil and gas investment — from $700 billion (£635 billion) to $300 billion (£270 billion) — between 2014 and last year, and you have everything you need to kick off a global energy crunch.

Meanwhile, in the UK, the number of people behind on their utility bills mushroomed from three million to nearly 11 million between March and August. 11 per cent of the British population — nearly six million people — are already forgoing food to pay their energy bills.

Would you want to be on the hook for any of this? It’s way easier to blame ‘the evil Russian guy’.

Over the last few years, America has shut down nuclear plants before their time, including Palisades in Michigan and Indian Point in New York.

The fossil-fuel industry isn’t interested in risking capital on expansion when the Democrats continue to sabre-rattle about destroying it. Not since Truman has a president leased so few federal lands to the oil and gas sector.

To make matters worse, most of the new capacity being added to the grid is intermittent and unreliable wind and solar.

The result of all this? – America’s energy and electricity sectors look anaemic, fragile and expensive. Some parts of the country have seen electricity prices increase by 233 per cent since last year.

After all, energy is indispensable to maintaining the economy.

First, we need more hydrocarbons. Fossil fuels are the master resource, like it or not…

Second, we need to liberate the atom. The Nuclear Regulatory Commission has adopted safety standards so extreme that no design offered since its inception in the mid-Seventies has ever been completed...

Third, we need to harden our grid. Wind and solar, when built in large amounts, have a free ride on the reliable power plants that can be called on at will to ensure the grid keeps running. They also tend to stop producing power when they’re needed most. According to the Energy Information Administration, when California was on the brink of blackouts, solar and wind production plummeted.

Of course, embarking on this plan will mean taking on the environmental establishment, which views anything outside of renewable energy as an existential threat to mankind. But the choice should be obvious: one road leads toward liberty and abundance, another leads toward tyranny and austerity.

European leaders, and later American ones — not Putin — have chosen the soft path and volunteered for disaster. And that has made all the difference, writes “The Spectator”.