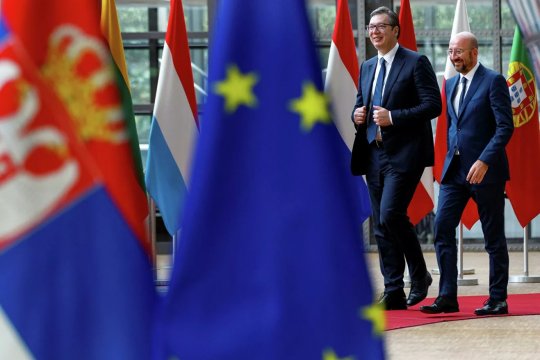 A meeting of Serbian and Kosovo leaders which is scheduled to take place in Brussels in September may result in the signing of an agreement on the normalization of relations. According to reports, the EU leaders, who act as mediators in the Belgrade – Pristina dialogue, have prepared a draft agreement. Serbian and Brussels sources say the draft provides for recognition of the self-proclaimed independence of Kosovo by Belgrade in exchange for Serbia’s membership in the EU.[1]

However, even if Belgrade chooses to sign the above-mentioned agreement, - such a step will do nothing to secure normalization in the Balkans. On the contrary, it could open a new chapter in the political and administrative “reformating” of the region. What comes as a key factor here is activization on the part of Albania, which is using the Belgrade-Pristina deal for its own purposes, and these purposes are infinitely far from what the leading European capitals count on. It would hardly be an exaggeration to say that a full-blown international and legal recognition of Kosovo's independence (which is supposed to result from the agreement prepared in Brussels on the normalization of bilateral relations between Belgrade and Pristina) will become a prologue to more active efforts on the part of Albanian radicals to establish “Greater Albania”, which would incorporate Albania proper, most of Kosovo, Presevo Valley, parts of Macedonia, Montenegro, and, possibly, Greece, with a total population of up to 10 million.

Statements in support of creating such a state have come recently from many high-profile political and public figures in Kosovo, who maintain close ties with the Albanian community abroad and with influential American and European politicians.  One of them is Azem Vlasi, who headed the regional branch of the Union of Communists of Kosovo and was a member of the Central Committee of the Union of Communists of Yugoslavia in the 1980s. He doubts that the recent talks in Brussels on the division of Kosovo will produce an agreement.  In his opinion, the authorities in Pristina are not prepared to give up control of the entire territory of the region. Besides, it’s Kosovo that could become a center of the “collection” of Albanian lands in the Balkans. [2]

The main guidelines to methodologically justify the program of creating “Greater Albania” were presented in the 1990s, by one of the most outstanding of Albanian intellectuals, Recep Chosja, who pointed out that «Albania has never accepted its present borders, always trying to remind international circles that its present borders are unfair, as they divide Albanian territory into two parts. These borders run across the very heart of Albanian people».[3]

The official position of neighboring Albania, which is same nationality with Kosovo, is the acknowledgment of inviolability of the existing borders. In 1992 the head of government from the Democratic Party of Albania Sali Berisha said in an interview that «the idea of creating “Greater Albania” is alien to Albanian ruling circles and political forces».

Nevertheless, in May 2011, member of the Presidium of the Democratic Party of Albania, Azgan Khaklai, openly demanded that all Albanian territories should be united to form one state, while the incumbent head of government Edi Rama has been indicating that unification of Albania and Kosovo is Tirana’s Plan A and should be regarded as such in connection with the agreement between Pristina and Belgrade.

Public opinion polls conducted among the Albanian population of the Balkan countries suggest that the program of creating “Greater Albania” has been acquiring ever more popularity among the Albanian population of the Balkan countries. The idea of making Albania’s borders “ethnic” has already won the support of more than 80% of the population of Kosovo, over 70% of residents of Albania, and of more than a half of Macedonian Albanians. About one half of respondents in Kosovo and 40% in Albania believe that Greater Albania with its widest ethnically conditioned borders will come into being in the near future. [4]

Meanwhile, at the end of 2006 a similar study conducted by experts of the UN Development Program found that only 2,5% of Kosovo Albanians considered unification with Albania the best solution, whereas 96% wanted Kosovo to become independent within the existing borders.

Such a situation may force leading world powers and international institutes to reconsider their recent policies, which focused on a state rather than on a territory and which envisaged that each Balkan country should search for a solution of its problems by itself. «A territory-focused policy regards the Balkan region not as a community of established countries, but as a system of territories that stay in dynamic balance and are thus capable of reformatting. «A carve-up of regional borders on the ethno-linguistic and religious principles may acquire fresh impetus in the course of current talks between Belgrade and Pristina. Serbia’s President Aleksandar Vucic has expressed readiness to recognize Kosovo in exchange for territorial concessions, while his counterpart Hashim Thaci hopes to invite to his country Serbian Albanians», - points out Le Monde diplomatique, emphasizing the situation in Presevo Valley, which borders on Kosovo.[5]

Another potentially explosive “hot spot” covers three South Serbian communities (Bujanovac, Medveja and Presevo). According to the last census conducted in  Serbia, about 90, 000 people live on the territories of these three communities. The ratio of Serbs and Albanians is as follows: in Presevo  – 89% Albanians and 9% Serbs, in Bujanovac – 55% Albanians and 34% Serbs, in Medveja – 26% Albanians and 67% Serbs.[6]

Chairman of Presevo community and leader of the Democratic Party of Albanians in Serbia Ragmi Mustafa has spoken in  favor of “exchange of territories” between Belgrade and Pristina, underscoring that all three communities “should join Kosovo” while “northern Kosovo should join Serbia”. In his words, the relevant proposal should be presented at the Brussels talks: «I think that this is the future of our region».

According to leaders of Presevo Albanians, the international community should make the Serbian government “refrain from impeding the expression of the freewill on the part of the population of the Presevo Valley».[7]

Such a position echoes the program of the radical Kosovo movement “Self-Determination”, headed by former Prime Minister Albin Kurti. Kurti believes that Kosovo and Albania “should coordinate their actions and simultaneously streamline their legislation with a view to prepare for two referendums, in Albania and Kosovo,  on the outcome of which Kosovo will unite with Albania”. “I think that  this meets the interests of our people in the economic sphere and in the sphere of security”, – Albin Kurti points out, saying that after the  referendum the time will come to “solve pan-Albanian issues, in the first place, in Macedonia, Eastern Kosovo [Presevo Valley], Montenegro and Greece”. In the opinion of the “Self-Determination” leader, Kosovo authorities ought to hold talks not with Belgrade, about the  division, but with Tirana, about the unification.

Given the situation, there are grounds to expect activization of efforts on the part of both Kosovo authorities and Albanian  leaders in other Balkan countries and territories with a view to build up their military and political might. In fact, this process is already taking place. Deputy Director of the Information and Press Department of the Russian Foreign Ministry Aleksei Zaitsev has made a statement to this effect drawing public attention to the fact that the United States has begun to supply Pristina with military hardware. According to the diplomat, the US is thus openly undermining international efforts oriented at ensuring peace and stability in the Balkans.[8]

Pristina has also stepped up efforts to establish military cooperation with Germany. All this testifies to the escalation of conflict in the Balkan Region amid the ongoing activization of the “Albanian factor”.