The theory of 'manageable chaos' put into practice 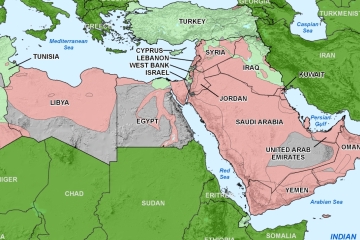 An act of self-immolation by a Tunisian street vendor in protest of the confiscation of his wares by municipal officials in December was covered in the media as the catalyst for mass riots in Tunisia, which later spread to Egypt, Yemen, Iran, Algeria, Bahrain, Jordan, Kuwait, Libya, Djibouti, Morocco.

Poor living conditions, dictatorial rule and corruption were among key reasons for the uprising. Lacking trust in the authorities, the protesters demanded change of power and democratic reforms. Inspired by riots in Tunisia, people in neighboring Arab countries took up the baton. At first sight their arguments seemed to be quite solid...

But when we look at the list of countries hit by social protests, we`ll see that not all of them can be described as poor. Kuwait, Bahrain, Libya, Tunisia and Iran have larger GDP than Bulgaria and some other countries of the EU. Even Yemen which is said to  be the poorest country in the Arab world, boasts a more prosperous economy than Moldova and Tajikistan (according to estimates unveiled in 2010).

Demands for better life were just an excuse for the poorest people in these countries to stage the riots. But each country in the world has people who are not happy with their government, which means that the real cause of protests often differs from that manifested.

Almost everyone who has been taking part in the riots demanding leaders to step down, used to support the governmnet before. Everyone except criminals who were lucky to flee prisons amid chaos in the streets and join the anti-government supporters.

It was clear from the very start that pleading for Arab unity and solidarity would not work. The United Arab Republic collapsed shortly after it was proclaimed, while the Union of Arab republics existed even less and only on paper. Libya was in war with Egypt and Sudan, the People's Democratic Republic of Yemen with the Yemeni Arab Republic, in Jordan the Black September militant group attacked Palestinians. Egypt, the Saudi Arabia, Syria and some other Arab countries took part in a war against Iraq in 1991, and many Arab army officials received medals from the U.S.

The Arabs are very different depending on a country they live in and traditions they have, that is why it is easier to find something they all have in common. Even the Arabic language – it is difficult to imagine anything that can unite people better than native language – fails to play this role since there are dozens of dialects preventing  people from understanding each other well.

Meanwhile, we should take into account that not all Arab countries were hit by the riots (protests in Iran are not directly linked to those in the aforementioned countries). There are only several countries experiencing social revolts which have very much in common.

Assumptions about recent protests in the Arab East being all parts of one game which was plotted from abroad will turn into facts as soon as we analyze technology used during the uprising and the results.

Recent events perfectly fit into the US-invented concept of 'manageable chaos' (also known as 'controlled instability' theory). Among its authors are: Zbigniew Brzezinski, a Polish American political scientist, Gene Sharp, who wroteFrom Dictatorship to Democracy, and Steven Mann, whose Chaos Theory and Strategic Thought was published in Washington in 1992, and who was involved in plotting 'color revolutions' in some former Soviet republics.

These are key principles of the 'manageable chaos' theory:

The legal basis and moral aspect

In geopolitics morality depends on national interests. As far as information warfare is concerned, it does not seem to do anything with internationally recognized notion of aggression. When there is no agreement on what to define as 'international terrorism' nothing prevents Washington from using whatever means to fight it in any part of the world, and the 'manageable chaos' theory comes in very handy here.

Implementation of the plan

In 1996 the U.S. created a presidential commission to work out offensive strategy of information warfare, while the CIA formed the Critical Technologies Group and the Department for international issues. A special technology was designed to automatically track all data transmitted via the Internet, including private correspondence, to identify suspicious messages by key words. Searching for these key words in Arabic was made a priority of the program.

The Pentagon first launched this kind of work even earlier. In 1990 the US Armed Forces adopted Field Service Regulations FM-100-20, which was replaced by FM-100-23 in 1994. In April of 2010 the US Cyber Command was formed as sub-unified command subordinate to US Strategic Command. It was headed by General Keith Alexander, the former director of the National Security Agency. In October, 2010 Gen Alexander announced his Cyber Command`s combat readiness.

In line with 'Perspective-2020' program for the US strategic military development, information superiority is one of key factors. The new command faced that task to carry out a full range of operations in the world wide web. Private companies were invited to join the program. In June, 2009 the US Special Operations Command and Gallup Polls signed an agreement to process the results of opinion polls in different parts of the world in order to use them later during implementing campaigns aimed at shaping public opinion. The Science Applications International Corporation (SAIC) was responsible for developing software that would be used in cyber warfare.

At the end of 2011 the White House reported that President Obama knew about protests in Tunisia, Egypt, Bahrain and Yemen in advance and in August, 2010, ordered his administration to prepare a secret report on the situation in the Arab world.

Practically in all countries hit by rioting the protesters used social networks websites Facebook, Twitter as well as Hotmail, Yahoo and Gmail services to exchange information on planned protest actions. All the aforementioned services are headquartered in the US and of course are controlled by the state.

Armed with necessary information, it does not take much effort to send messages to a number of people who would later pass the information over to others who may not know anything about Twitter but are always ready to participate in violent protest campaigns.

And there is nothing wrong if local security services find that the uprising is being planned in the web because it is quite easy to codify IP address of the main computer, and what is more important- it is impossible to stop thousands of people from taking to the streets.

Internet and mobile cutoff was delayed for several days, sometimes for a week, which in some cases resulted in a serious blow to the authorities.

It appears that this large-scale campaign seeks global redivision of the world and a change in leadership in countries where the US has its long-term strategic interests. If young pro-western politicians ascend to power in the region, the US will enjoy its growing global position, while China, Russia and the EU will be left behind.

Special attention is paid to Islamist groups of all kind. Egypt's oldest and largest Islamist organisation, The Muslim Brotherhood, has remained the mouthpiece of protests in the Muslim world. And recently the organization has been experiencing the process of gradual legalization in exchange for decline of radical forms of expressing protests. As a result, once banned, The Muslim Brotherhood enjoyed almost 20% of seats in parliament until it was dissolved last month. Undoubtedly, this organization will gain even more votes in next parliamentary elections.

Fundamentalists will also become stronger in other countries where the US applied its cyber warfare, but these will be new generation Islamists, so to speak, like in Turkey where The Muslim Brotherhood is a ruling party. They use Islamic slogans in rhetoric but in fact deal with the issues of international integration.

Those who oppose new rules of the game will have to choose between hard-line reprisals or an exile.

The implementation of the campaign was spoiled by Libyan leader. For years the US administrations dreamed of getting rid of Muammar Gaddafi, but each time this charismatic and independent leader somehow manages to outwit the Americans. And thus Gaddafi saved other Arab leaders, who were next in the line, so to speak.

However, the US positively views achieved results. Apart from gaining control of the largest oil and gas fields and transportation routes, Washington will get access to markets where it may sell its arms. It is also very important that the US dollar will remain the major currency in the region.

Israel is pleased with the outcome of the uprising too as Arab leaders are now more deeply  concerned about their own future rather than confrontation with the Jewish state. It will take the Arab world much time to recover from the blow. Strange as it might seem but the Saudi Arabia has gained its benefits too because now it has no rivals, except Israel, in struggle for being a better ally for the US in the region.

We should admit that the 'manageable chaos' theory has proved to be effective in terms of geopolitical re devision of the world. Exceptions just prove the rules: Gaddafi will remain in power, but this is no longer the Libya that once belonged to him. The aforementioned Steven Mann said in 2008 that Belarus was the only country where he failed to achieve his goals. But Washington is still full of hope.