The Trianon. Riding the Moscow-Budapest Train 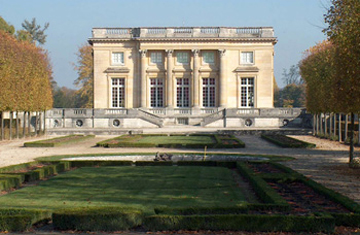 Some 90 years ago, on June 4, 1920 the allies who won World War I and the defeated Hungary signed a peace treaty – the Treaty of Trianon - in the the Grand Trianon Palace in Versailles. Subcarpathian Rusyns, Slovaks,

Romanians, Croats, Serbs, and the respective communities across the world rejoiced at the liberation from the protracted Hungarian domination.

The treaty formalized the de facto situation in the Danube basin after the War. As a result, Hungary lost 2/3 of its former territory and population, including 3 mln ethnic Hungarians, to other countries and stepped into an epoch of national tragedy and humiliation. When Miklós (Nicolas) Horthy became the country`s dictator, the signing of the Treaty was officially mourned, and till 1938 all Hungarian flags were flying at half-mast. Every morning before classes, Hungarian schoolchildren read a special prayer for the reunification of their country.

Hungary earned a revision of the Treaty of Trianon in 1938-1941 by siding with Nazi Germany. Ostensibly “restoring justice”, Vienna arbitrations allowed Hungary to regain some of the territories – the north of Romania, the south of Slovakia, and Subcarpathian Ruthenia - carved out of it in 1920. In 1941 Germany occupied Yugoslavia, and Hungary got Vojvodina as another reward for loyalty. The Subcarpathian Rusysns, along with several other nations, inhabited all of the above territories. Hungary`s territorial acquisitions were reversed after World War II and currently Hungary exists within the borders set by the Treaty of Trianon, with seizable ethnic Hungarian minorities residing in Romania, Slovakia, Austria, Vojvodina, and Ukraine. Numerous descendants of the ethnic minorities of the former Austro-Hungarian Empire, on the other hand, live in the present-day Hungary. Over 150,000 ethnic Hungarians and some 800,000 Rusyns plus Romanian, German, Gypsy, Slovakian, and Russian minorities live in Subcarpathian Ruthenia which is a part of West Ukraine. Most of them know some Hungarian and descend from the people who – repeatedly and without formalities – happened to change citizenship, in many cases becoming citizens of Hungary, without moving out of their homes. Last time such shifts happened in 1938-1944, which, from the historical perspective, sounds like yesterday.

Map of partition of the Kingdom of Hungary according to the 1920 Treaty of Trianon. 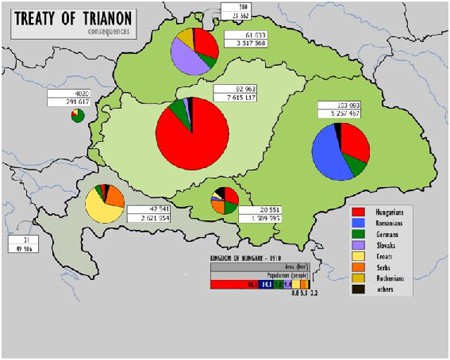 The political landscape in Hungary started to evolve at a breakneck pace when Fidesz, a right-wing political party with a radically nationalist agenda, won the national elections this year. On May 17, Fidesz submitted to the Hungarian parliament a package of draft legislation including the dual citizenship law. Fidesz deputy leader Kósa Lajos said the purpose of the amendment is to grant dual citizenship to ethnic Hungarians living outside of Hungary who have no permanent residences in the country, used to be citizens of Hungary but lost the citizenship due to various international treaties or legal norms of other countries.

The citizenship amendment was passed on May 26 by 344 votes against 3 (socialists including former Hungarian premier Ferenc Gyurcsány) and 5 abstained (3 socialists and 2 from the Politics Can be Different green liberal party). Since there are 386 seats in the Hungarian parliament, several parliamentarians obviously were not present. Parliamentarians stood up to cheer when the amendment was passed.

Now any citizen of a country neighboring Hungary can claim being a descendant of citizens of Hungary or the Austro-Hungarian Empire without supplying any documents, demonstrate minimal fluency in Hungarian, and become a Hungarian citizen (the rule does not apply to individuals having criminal records in Hungary, currently put on trial in Hungary, or presenting a potential threat to the security of the country). Hungarian citizenship will be granted by the country`s consulates, departments of citizenship status records, or a special body authorized by the government based on individual applications, which must be processed within 3 months from he submission date.

Budapest is convinced that any sovereign country enjoys unlimited freedom to set its citizenship procedures and the international law puts no obstacles in the way of granting citizenship to Hungarians residing outside of the country. Authors of the legislation draft also remark that an analogous law on shortcuts to citizenship existed in 1886 – at that time it applied to the Hungarian-speaking minorities living in Moldova (Romania).

On May 31, 2010 the Hungarian parliament passed legislation declaring June 4 – the date the Treaty of Trianon was signed – a day of national solidarity. The text of the law describes the signing of the treaty as the greatest tragedy in the history of the Hungarian nation and calls for negotiations over all current conflicts stemming from it. It also states that all Hungarian communities and their members enslaved by neighboring countries belong to the undivided Hungarian nation whose solidarity recognizes no borders, and that the solidarity is an integral element of the Hungarian individual and social identity.

The Hungarian minorities in Slovenia and Croatia number just 0.45 and 0.1 of their populations, and Serbia seeks to befriend Hungary – the country to hold the rotating EU presidency since January 1, 2011 - as a part of the Serbian government`s broader EU aspirations.

Romania as the country distributing its passports among the populations of Moldova and Subcarpathian Ruthenia predictably avoids commenting on the issue. In fact, largely it was Romania`s example that proved motivating for Hungary.

The Hungarian amendments made the US and Canada nervous. Currently Hungarians from Romania, Serbia or Ukraine need visas to enter the two countries, but the amendment passed by the Hungarian parliament removes the obstacle. The availability of Hungary`s citizenships to Hungarians living outside of the country also breeds problems for the Schengen zone. Ukraine and Serbia are not in the EU, and Romania, a EU member, remains shut out of the Schengen space. So far Brussels is trying to be neutral. Matthew Newman, spokesman for European Commissioner for Justice, Fundamental Rights and Citizenship Vivian Reding, stressed that countries have sovereign rights to decide on their citizenship rules, and the European Commission has no right to intervene.

How is Ukraine – with its newly pro-Russian orientation and residual pro-Western “orange” opposition – going to react to the step made by the Hungarian parliament? Ukrainian laws neither afford dual citizenship nor envisage revoking the Ukrainian citizenship under any circumstances. The anticipated consequence is that by mid-2011 Ukraine will be drained of some 750,000 citizens - alleged former Hungarians plus Rusyns from unrecognized Subcarpatian Ruthenia who will certainly seize the opportunity to escape to the Schengen zone. Chances are the governor of the Rusyn informal capital of Uzhgorod, an ethnic Rusyn appointed by Kyiv, will also choose to flee...

Finally, what about Moscow? With an air of importance, it keeps silence. Or, maybe, there is nothing important about the silence and Moscow is completely oblivious to what is going on at the outskirts of the Russian world? Should Russia really worry that a few hundred thousand Rusyns who used to struggle to preserve their Slavic identity will leave Russia`s immense expanses and end up absorbed by “the highly civilized Europe”? So what – fewer people will claim the Russian IDs, and those tend to be in short supply...