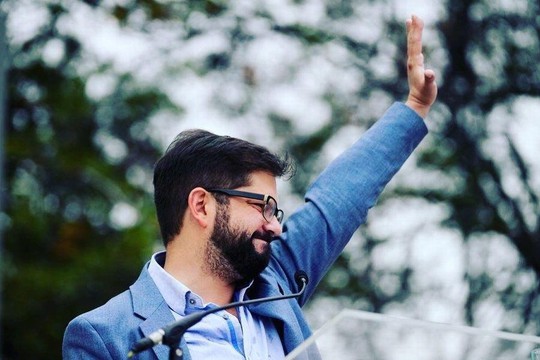 The triumph of Boric in Chile is not only a political and geopolitical earthquake in fact is a triumph with high symbolic content in the region: It is the triumph of an alternative political force in the cradle of neoliberalism in the region, the first laboratory of the Chicago School in South America, a market dictatorship and minimum state imposed on violence by Augusto Pinochet in a military coup in 1974 and consolidated as a neoliberal democracy in the 1990s, under a supposed "centrist consensus" between post-Pinochetist conservative forces and the traditional Chilean left (la Concertación, which had former presidents Ricardo Lagos and Michelle Bachelet as top exponents). A supposed democratic consensus that in practice didn’t changed the economic, social and political structures inherited from the military dictatorship.

This result seems to throw away that so-called Myth of Chilean Exceptionality: the archetype of the ideal neoliberal state, which for years inspired the discourses of the liberal right-wing forces of South America, a model of economic growth with a minimum State and high entrepreneurial freedom, under an alleged aura of social and political stability, the (neo) liberal order to be emulated throughout the region.  But that order has been broken in Chile.

First the 2011 student protests (in which Boric participated) would give a preview of the movements that were brewing in the roots of Chilean society. Finally the breaking point would be the 2019–2021 protests (el estallido) - with similar protests throughout South America with a clear anti-neoliberal and status quo emphasis - would lead to the election of a reformist constitutional assembly and now this December as a result of the election of Gabriel Boric as president, a clear revisionist of the neoliberal paradigm in his country.

Such a rupture could not have been explained more concretely than by Boric himself in his speech as elected president: "an economic growth which is based on deep inequality has feet of clay”.

Such events are cause for illusions, justified or not, not only in Chile, but throughout the region for those who preach an alternative model of society to the neoliberal paradigm.

Gabriel Boric’s resounding triumph on December 19 has sparked debate about a possible "Second Pink Tide" in South America, to some extent the outcome of this election - as well as that of Pedro Castillo in Peru and Arce in Bolivia - have given new vigor to this idea, which while debatable, the fact that Boric’s victory is a breath of fresh air for the besieged progressive governments after two years of pandemic and a turbulent and volatile international scenario for some time now can’t be denied.

The 2019 wave of protest in South America and the electoral defeat of Mauricio Macri in Argentina the same year added to the Covid 19 pandemic and its effects on the region extended for more than a year (the dramatic drop in approval levels of the Bolsonaro administration in Brazil as a paradigmatic example) seem to converge in a single diagnosis: the neoliberal paradigm in South America (and Latin America) is in crisis.

This terminal crisis is already evident. But the alternative forces to this paradigm have not yet been able to assert their bases. So a long and laborious post-neoliberal process is foreseen.

Following a quote from Gramsci, times of crisis are those where: “the old is dying and the new cannot be born yet”.  Progressive governments with post-neoliberal paradigms of the first Pink Tide could not consolidate Counter-Hegemony within their countries (institutional and cultural structures of neoliberalism) nor counterbalance the influence of the United States at regional level through joint action.

In geopolitical and institutional terms, virtually all the processes and organizations of regional integration in South America and Latin America are now standstill. Both historical regional organizations (such as MERCOSUR) and those driven by the progressive Pink Tide: CELAC, UNASUR,

It will be the challenge of Boric as well as the next leaders who will emerge from the electoral cycle in 2022 in the region to re-enact, revitalize the regionalism of La Patria Grande.

The political process that in 2022 will be able to map out more precisely future regional trends in this regard will be the presidential election in Brazil in October, where today Lula da Silva has a wide advantage according to most public opinion polls.

Lula’s victory -the alternative forces to the neoliberal project and the unipolar alignment to the US, now represented by the Bolsonaro administration in Brazil- , would be the necessary change to turn the tide regionally  and provide the political strength required to revitalize the regional unity project.

From 2022 onwards, a new convergence between the governments of Argentina, Brazil and Chile would allow to relaunch the postponed ABC platform (Argentina, Brazil, Chile) proposed by Peronism in the 50s.

The ABC project and Continentalismo are both strategic concepts of the geopolitical doctrine of Peronism. And in such doctrine they are the basis for the realization of the South American Union. Such a union would allow the consolidation of an autonomous continental pole that would counterbalance the influence of the great powers in the region, still valid ideas in an increasingly multipolar and complex world, in which new competences, debates and paradigms emerge.