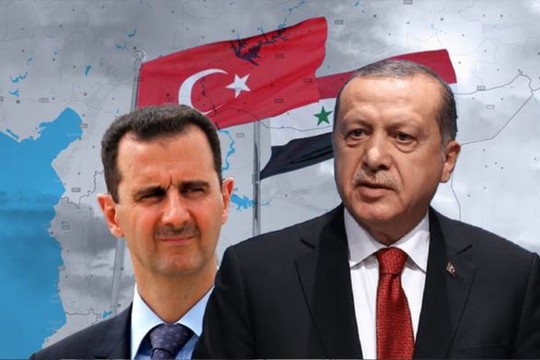 The curtain is coming down on the brutal 11-year old Syrian conflict, which former US President and Nobel Laureate Barack Obama initiated, as the Arab Spring swept through West Asia two decades ago. The United States has suffered yet another big setback in West Asia as the year 2022 draws to a close. The unfolding Turkish-Syrian reconciliation process under Russian mediation is to be seen as a saga of betrayal and vengeance, - writes Indian Ambassador and prominent international observer M.K. Bhadrakumar.

Ankara came under immense pressure from the Obama Administration in 2011 to spearhead the regime change project in Syria. But Ankara took its time to calibrate its foreign policies to adapt to the Arab Spring before responding to the shifting landscape in Syria. Erdogan was caught unprepared by the uprising in Syria at a juncture when Ankara was pursuing a “zero-problems” policy with Turkiye’s neighbours.

Syria was the ultimate test case and a real challenge for Erdogan. Ankara had invested heavily in the improvement of relations with Syria within the framework of the so-called Adana Agreement in 1998 in the downstream of Turkish military’s massive showdown with Damascus over the latter harbouring the PKK [Kurdish] leader Ocalan. Erdogan initially did not want Bashar al-Assad to lose power, and advised him to reform.

Obama had to depute then CIA chief David Petraeus to visit Turkey twice in 2012 to persuade Erdogan to engage with the US in operational planning aimed at bringing about the end of the Assad government. It was Petraeus who proposed to Ankara a covert program of arming and training Syrian rebels.

But by 2013 already, Erdogan began sensing that Obama himself had only a limited American involvement in Syria and preferred to ‘lead from the rear’. Simply put, Erdogan felt embittered that he was left holding a can of worms and Obama had scooted off. Worse still, the Pentagon began aligning with the Syrian Kurdish groups linked to the PKK

Indeed, since then, Erdogan had been protesting in vain that the US, a NATO ally, had aligned with a terrorist group (Syrian Kurds known as YPG) that threatened Turkiye’s sovereignty and territorial integrity.

It is against such a backdrop that the two resent meetings in Moscow between the defence ministers and intelligence chiefs of Turkey and Syria in the presence of their Russian counterparts took place.

Erdogan’s reconciliation process with Assad is quintessentially his sweet revenge for the American betrayal. Erdogan sought help from Russia, the archetypal enemy country in the US and NATO’s sights, in order to communicate with Assad who is a pariah in American eyes.

Turkish Defence Minister Hulusi Akar said: “At the meeting (in Moscow), we discussed what we could do to improve the situation in Syria and the region as soon as possible while ensuring peace, tranquility and stability… We reiterated our respect for the territorial integrity and sovereignty rights of all our neighbours, especially Syria and Iraq, and that our sole aim is the fight against terrorism, we have no other purpose.”

Without doubt, the normalisation between Ankara and Damascus will impact regional security and, in particular, the Syrian war, given the clout Turkiye wields with the residual Syrian opposition. A Turkish ground operation in northern Syria may not be necessary if Ankara and Damascus were to revive the Adana Agreement. In fact, Akar disclosed that Ankara, Moscow and Damascus are working on carrying out joint missions on the ground in Syria.

From the Syrian perspective, the normalisation with Turkiye is going to be far more consequential than the restoration of ties with various regional states (starting with the UAE) in the recent years who had fuelled the conflict. Turkiye’s equations with Syrian militant groups (eg., Syrian National Army and Hayat Tahrir al-Sham), its continued occupation of Syrian territory, Syrian refugees in Turkiye (numbering 3.6 million), etc. are vital issues affecting Syria’s security.

The US resents Erdogan’s move to normalise with Assad — and that too, with Russia’s helping hand. It is now even more unlikely to give up its military presence in Syria or its alliance with the Syrian Kurdish group YPG (which Ankara regards as an affiliate of the PKK.) Indeed, the replacement of the YPG militia by the Syrian government forces along the borders with Turkiye would lead to the weakening of both YPG and the US military presence. However, the question will still remain unanswered as regards the place of Kurds in the future of Syria.

Last week’s meetings in Moscow show that Russia’s standing in the West Asian region is far from defined by the Ukraine conflict. Russian influence on Syria remains intact and Moscow will continue to shape Syria’s transition out of conflict zone and consolidate its own long-term presence in Eastern Mediterranean.