The United Colors of Bulgaria 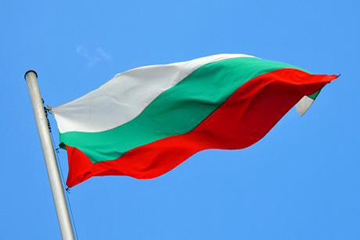 It is funny the way particular types of salad can spread from one culture to another. For instance, the French introduced the Russians to one type, which became known as Salad Olivier in their honour. The Russians in turn introduced this to the Bulgarians where it was a hit, so it’s known in Bulgaria as Russian Salad. Whilst it is undoubtedly popular in Bulgaria, it is not the most popular. No, the number one king of salads there is the Shopska.

Take a look at the Bulgarian flag. Three bands of colour. Red, green and white. Not the most exciting looking flag ever invented yet it symbolises the real Bulgaria in many different ways.

It could easily have been invented to represent that most Bulgarian of dishes, the shopska salad. No meal in Bulgaria is complete without a shopska salad, be it as a starter, side dish or main course in itself, Bulgarians just love shopska. All the colours of the flag appear in the shopska. Or is that the other way round?

Let’s start with the green.

Diced green peppers and cucumbers. If you frequent burger bars in UK you will probably have noticed that the first thing most diners do is lift the top off the burger and throw away the gherkin. Ash trays used to be full of them before smoking was banned in public. Not so here, where such an act ranks alongside the desecration of religious artefacts. As indeed does the whole concept of a smoking ban. Russians are completely the opposite. When my friends in England see me eating pickled gherkins straight from the jar, they just laugh and call them Russian narcotics. So it is n Bulgaria also. The Bulgarians worship the humble cucumber in all its varieties and can’t understand why the rest of the world underrates it so. The local supermarket has a whole aisle of pickled cucumbers to choose from so that the locals can get their ‘fix ‘even when the vegetable is no longer in season. It is a national addiction.

Next to the aisle of pickled cucumbers is an aisle of preserved peppers. Red peppers, green peppers, hot chilli peppers, row upon row of glass jars preserved in apple vinegar, balsamic vinegar, olive oil, sunflower oil, you name it. The choice is staggering.

Even more so when you consider that everybody preserves their own at home anyway. When peppers come into season the locals completely lose the plot. You see them coming home from the market laden with peppers. They don’t buy them by the half kilo but rather by the sack. Old people staggering home under the weight of their peppery purchases. Mothers pushing prams full of peppers while the baby totters alongside. But it is when they get them home that the madness really begins.

Now I don’t profess to be an expert in preserving food for winter but the Bulgarians have a very disturbing and frankly unnecessary tradition. When they get the peppers home they use blow torches to burn off the skins. Seriously, I’m not making this up.

The net effect of millions of Bulgarians torturing their veggies with fire and flame is to fill the atmosphere with enough toxic material to leave you sneezing through a gas mask. I didn’t know I had an allergy until I moved to Varna.

Every family has their own recipe for the now nude peppers and most won’t share it. The exception to this is my friend’s grandmother who told me that the secret to keeping things fresh and crispy is to put a paracetamol in every jar. She should know. Judging from the smell of her breath she has been trying to pickle herself for years.

Next part of the shopska salad is a layer of red.

Sliced tomato. I feel the Bulgarian flag is missing something. Rather like the majestic cedar tree on the Lebanese flag, the Bulgarian flag truly ought to be emblazoned with a shiny ripe tomato. A friend of mine spent last summer in UK picking fruit on a farm near Hull. She now suffers from an amusing if slightly irrational hatred of strawberries and walks with a slight hunch from all the bending down. I asked her what she missed most about her homeland. After the lousy weather she had endured working in the fields all summer I was pretty sure the answer would be something like ‘sunshine’.

Slavka tapped a finger on the side of her nose as if sharing a deep secret. “Yes but they don’t taste like Bulgarian tomatoes”.

No of course not. I stand corrected.

I would agree with her. I remember from my childhood in Russia how we used to queue to buy boxes and boxes of plum tomatoes produced in Bulgaria, and I fondly remember their lovely sweet flavour.

This brings me to an interesting point about the shopska salad that serves as an example of Bulgarian patriotism. I like to frequent a local taverna run by my friend Georgi.

It’s a nice traditional place, off the beaten track a little and rarely visited by tourists.

The menu is standard Bulgarian fare of the kind served in similar tavernas all over the land. Mostly chicken or pork dishes served with chips. A standard joke amongst expats is that when you first arrive here you should steal a menu from a restaurant then use it to order in every other restaurant you visit for the next year. The only variation you will find will be in the prices.

Anyway back to my point.

On Georgi`s menu shopska salad is described as one of Bulgaria’s oldest recipes eaten by villagers in ancient times. I once pointed this out to Georgi.

“Hey Georgi, see it says here that you make shopska to an ancient recipe”.

“But look at the ingredients mate. Tomatoes and peppers come from the Americas”.

He started laughing. “God you’re right. We must have got there before Columbus!”

“Ha, ha, ha. Good one Georgi.” (When I was young, we used to call sweet peppers”Bulgarian peppers” so maybe he has a point).

But wait a minute. What if he is right? That would mean that way; way back in time Bulgarians visited South America and brought back ….some root vegetables, tomatoes and peppers. Leaving the enormous gold and silver wealth of the indigenous population for the Spaniards to take home.

The final colour of the flag is white and the final ingredient of the salad is a heavy topping of grated white cheese. Cheese here comes in two varieties: white or yellow. White Feta style or yellow kashkaval style. If it isn’t then it isn’t Bulgarian.

That’s it. All you need to make a simple shopska salad. And if like me you have reached the age where you have to write everything down or risk forgetting it, then one look at the flag should be enough to remind you.

Sadly I will never make a real Bulgarian. I am no great lover of salads and prefer my food a lot spicier than most Bulgarians.

When I first arrived here Georgi persuaded me to try one of his shopska salads. I was presented with a huge plate full of veggies covered by an avalanche of grated white cheese. I managed to get through the cheese all right. I like cheese. I even made a manly attempt on the tomatoes – sorry Slavka, a tomato is a tomato no matter what it says on its passport. But when faced with all that greenery I knew I didn’t have the right stuff to be a Bulgarian.

The summer tourist season starts here soon, so if you are coming here on holiday why not try a Shopska for yourself and make your own opinion.