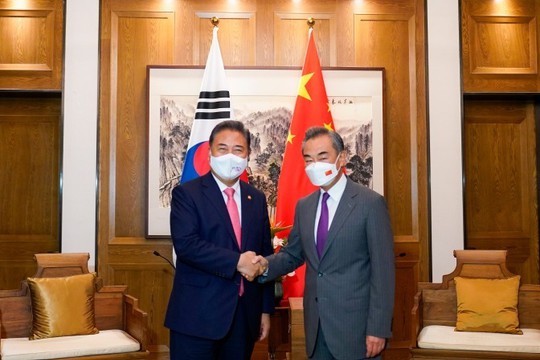 The provocative actions of the United States against China with the involvement of Japan eventually led to the fact that the Peking suddenly began to move closer to South Korea. Although American influence is strong in this country and a large number of US troops are stationed there. The Associated Press reports this with surprise.

South Korea, a longtime U.S. ally, is struggling to strike a balance between Washington and the increasingly assertive foreign policy of Chinese President Xi Jinping’s government. U.S.-Chinese conflict over Taiwan has added to complications for governments that want amicable ties with both sides.

Foreign Ministers Park Jin and Wang Yi, in separate statements from their meeting in the eastern Chinese city of Qingdao, called for the development of relations based on three decades of successful commercial ties.

Park and Wang gave no indication they discussed tensions over last week’s visit by U.S. House Speaker Nancy Pelosi to Taiwan and her visit to the region as a whole.

Pelosi visited South Korea last week, but South Korean President Yoon Suk Yeol, who was on vacation, talked to her by phone instead of face to face. His critics accused him of avoiding seeing her to protect relations with China.

South Korea’s pursuit of closer ties with Washington could possibly complicate relations with China. South Korea is weighing whether to participate in a U.S.-led semiconductor alliance involving Taiwan and Japan, which China sees as an economic threat.

China’s state-run Xinhua news agency said Wang and Park had an “in-depth exchange of views” over South Korea’s deployment of the U.S. Terminal High-Altitude Area Defense system, or THAAD, and both expressed hope that the issue wouldn’t become a “stumbling block” in relations.

Park and Wang called for maintaining stable industry supply chains, a possible reference to fears that Chinese technology policy and U.S. security controls might split the world into separate markets with incompatible standards and products, slowing innovation and raising costs.

Park expressed hope the two sides will increase cooperation based on “universal values and standards.”

He said they should overcome new challenges posed by a “great transition in international society” but gave no details.

Wang’s statement didn’t mention the nuclear issue and gave no indication whether he said what Beijing might do, writes AP.