The U.S. in the Middle East: betting on Turkey 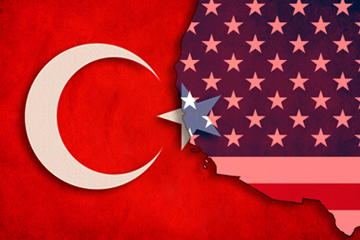 With the arrival of Barack Obama in the White House, Washington began an active revitalization of US -Turkish relations in all directions. With the revitalization of American policy toward the Middle East, this was a necessity, and it was important to Washington to combine its hegemonic aspirations with Ankara's regional ambitions.

The increased attention that the United States administration has devoted to Turkey is indicated by the repeatedly increasing number of articles in the American media devoted to this country in the context of Middle Eastern events, and the American "think tanks" have launched thematic programs on Turkey and its policies. Ankara is ranked in a lowly twenty-fifth place among the trading partners of the U.S. in terms of economic cooperation with Washington, and the number of people of Turkish origin living in the United States is relatively small (1). However, Ankara is one of the Americans’ main allies in the Middle-east.

If even before, Washington saw Turkey as a foothold of American influence adjacent to the borders of the Soviet Union, now the betting has increased. Turkey borders not only the zone of Russia’s geopolitical influence (Armenia, Azerbaijan), but also with the main opponent of American hegemony - Iran. Against the background of the rivalry between Tehran and Ankara over the right to define the cultural and political contours of the Islamic world in the Middle East, the United States undertook a rapprochement with Turkey, which the already complicated relations with Tehran works into Washington’s hands.

Despite the fact that the Islamic world today is a seething maelstrom of people and events, and the "demographic ocean" threatens to “flood " the nearby shores, it does not today have a geopolitical plan. The modern Islamic world stands in the position of a slave, not a master. The three Islamic "heavyweights” of Saudi Arabia, Turkey and Iran, are acting like the swan, crayfish and pike in Krylov’s fable. If Ankara and Riyadh have more points of contact, then Tehran remains virtually isolated, but it still competes at the same time with the Saudis and the Turks.

Previously the window to the world for the Iranians was the Syria of Bashar al-Assad. Now the window wants to be closed, blocking Tehran’s access to the fresh air in world politics, and narrowing its geopolitical horizons. The active participation of Ankara in this campaign was understandably predictable.

Tensions over Syria chronologically coincided with a change of Ankara’s foreign policy priorities. The essence of this was expressed in an article by Yigit Bulut, a senior adviser to the Turkish Prime Minister, who wrote in his article "Can Turkey be among the leaders of the world?" In the newspaper “Star”, he claimed that the European Union is in a state of dissolution, and that the Turkish government must base their policies on their rich traditions, instead of trying to get EU membership (2). Refusal to give priority to the Western foreign policy vector means a gain in the share in the opposite direction: the Middle East, Central Asia and Africa. This is what we now see, as Ankara tries to be more active on the African continent, as well as strengthening its position in the Central Asian republics of the former Soviet Union and in the Crimea.

Turkey is useful to the Americans by the fact that through it they can influence paramilitary groups by direct official contacts, which the White House cannot afford to do. For example, with groups like Hamas, with which Turkey finds common ground. Turkey also, is the perfect mediator in a complex dialogue between Israel and the Palestinians, and so any impact made on Turkey will partly influence the Palestinians. Ankara's active complicity in an attempt to overthrow Bashar al-Assad has prepared the ground for closer relations with Tel Aviv. So, in the Middle East at this moment, the current geopolitical configuration in which the two antagonists find themselves, Tel Aviv and Ankara have put aside competing claims in favor of a common cause, and it has become even more difficult for Tehran to untangle the conflicting knots, which are being tightened by the United States, and not without the help of their Middle Eastern allies.

Let me remind you that Washington has stood behind Turkey's attempts for admission to the EU since the late 1980s. To see Turkey in the EU would be a great opportunity for Washington to put “their own man” into the circle of European nations. It also would give weight to the image of Turkey as a pro-American Islamic state, which has chosen a secular way of development. It is easy to understand why this is opposed by the European "heavyweights" - France and Germany. The arrival in Europe of a large Islamic state, which closely coordinates its foreign policy with Washington and possesses a different, non-European socio-cultural code, could eventually weaken the EU from within. Today, Turkey performs for the Americans in the Middle East, the same role that Poland performs for them in Europe.

The Turkish- American partnership has a multi-level character. It is not only the Syrian issue, but the Crimean Tatar issue and also coordinated action in the Black Sea region, where the interests of the two powers coincide. Some time ago there was an inclination for Ankara to lean towards Russia, but this is a thing of the past, and Turkey sees itself as standing alongside the United States in the context of Middle Eastern politics. The plan for a Greater Middle East is to throw a bomb into the Middle Eastern capitals, including in countries allied to the United States, forcing Ankara to be more active and participate in the process that it has failed to lead. This will save Turkey from a redrawing of the map, which the authors have prepared for her in their plan for a Greater Middle East.

2) "The European Union joined in the process of dissolution - Advisor to the Prime Minister of Turkey” ("United Russia", 27th September 2013 )