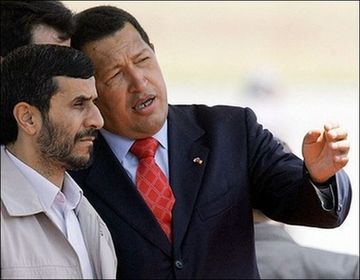 The Columbian government voiced a new round of allegations that Venezuelan President Hugo Chavez is secretly supporting the FARC and ELN guerrilla movements in Columbia and giving shelter to their leaders. Venezuela reacted harshly – Chavez severed the diplomatic ties with Columbia, and the Organization of American States had to hold an urgent meeting on July 22 on Columbia's request. This was the third time this year that the administration of Alvaro Uribe leveled such charges at Caracas and claimed to possess solid evidence that leftist groups are operating from the territory of Venezuela.

Venezuela rejects the allegations that it supplies weapons and money to FARC and ELN, trains their guerrillas, or allows them to use its territory. The border between Venezuela and Columbia is 2,000 km long and lies in the area which abounds with mountains and rainforests. It is also crossed by countless rivers. As a result, the border is practically impossible to seal off and – long before the advent of Chavez – the terrain became homeland to various smugglers, drug dealers, seekers of gold and diamonds, and all brands of adventurous people. Secretary General of the Organization of American States Jose Miguel Insulza agreed that Columbia's charges are groundless, citing the fact that the terrain where the guerrillas come and go is too difficult to be controlled by any single country. He noted that while Uribe is lambasting Venezuela for not arresting the guerrillas Columbia is just as unable to get a hold of them.

Insulza praised Chavez for calling FARC to put down arms as this is the precondition for the resolution of the crisis and a political settlement between Venezuela and Columbia.

In his analysis of the situation, Chavez stressed that Columbia is playing “a dependent role” in the confrontation which so far remains limited to verbal exchanges. Columbia's “initiatives” aimed at provoking the condemnation of Venezuela and Chavez for alleged links to terrorists and drug cartels by the Organization of American States and other international organizations are incited and coordinated by the US. Washington is pushing for the international isolation of Venezuela and trying to undermine the domestic positions of Chavez's “regime” with the help of the CIA and DEA covert operations combined with the lavishly sponsored activities of an extensive network of biased NGOs. The efforts failed fabulously during the presidency of G. Bush: contrary to the forecasts churned out by the US Department of State, the CIA, and the Pentagon, it became clear after the numerous election campaigns won by Chavez during the past decade that his administration is remarkably stable. Having arrived at the conclusion, the administration of B. Obama, the winner of the Nobel Prize for Peace, switched to the scenarios of displacing Chavez by force. Under B. Obama, the US started to actively reinforce the existing and set up new military bases along the borders of Venezuela. The US maintains 10 military bases in Columbia alone, though on top of that the Pentagon enjoys unrestricted access to the de facto occupied country's own military infrastructures. US army and navy bases have also been promptly built in Costa Rica and Panama. Experts believe the list of potential targets of the forces deployed at the bases includes both Venezuela and its regional allies – Cuba, Nicaragua, and Ecuador. US military advisers are dispatched in increasing numbers to Guatemala, Honduras, and Salvador. Over the past several months, the US subjected to heavy militarization its border with Mexico.

Not even bothering to seriously disguise its plans, Washington is bracing for a military campaign in the Western Hemisphere. Until recently, the activity used to be orchestrated from behind the scenes by US ambassador to Columbia W. Brownfield, G. Bush's protege who has authored a series of failed plots in Venezuela. The transplantation to Columbia gave him a second chance which he did not blow – luckily for him the local oligarchy and rightist military elite were ready to do whatever it takes to prevent the spread of “populism” in the region.

Chavez speaks frequently about the threat posed by the US. This July, he mentioned several times the warnings about the higher than ever threat of the US aggression he received from a well-informed “secret friend” in Washington. Information from alternative sources confirms the claim. Chavez's assessment is that at the moment Venezuela is facing the highest risk of an aggression from the territory of Columbia over the past century. As a result, Chavez was forced to cancel his traditional visit to Cuba on the anniversary of its revolution.

Chavez discussed the alarming situation at the border between Venezuela and Columbia with the regional leaders. He says Washington is not interested in its fair assessment. In Chavez's view, the US has extensive experience in inventing excuses for aggressions. In the case of Iraq, the US floated the myth about weapons of mass destruction in the country. Chavez says for Americans any excuse will do and any lie is acceptable when they need to overthrow a government or kill a president unwilling to cooperate with them.

Chavez warned Obama's administration that the US would never get a barrel of oil from Venezuela in case the sovereign country comes under attack.

Washington is waging a permanent smear campaign against Venezuela. Reports are circulated that Chavez hosts ETA terrorists or guerrillas from Iran, Palestine, and Lebanon and helps them to penetrate the US. The disinformation easily disproved by Venezuela will certainly reemerge when the US and Israeli forces hit Iran's “nuclear infrastructures”, airports, and army bases. This time, we will hear dramatic news that Iranian terrorists assisted by Chavez are launching attacks against the US territory from Venezuela and that US embassies in the country are coming under strikes from Venezuelan extremists. The US routinely resorts to provocations to accomplish its objectives. Attacks against US installations in Caracas can be organized with the help of Columbian paramilitary formations which are already operating in Venezuela or the US military intelligence known to be running networks of agents in the country's industrial centers. The corresponding scenarios have been described a number of times by acknowledged expert in US-Venezuelan relations Jose Vicente Rangel.

These days Iran's nuclear ambitions are a myth like the one about the weapons of mass destruction in the hands of S. Hussein, but the global media have already conditioned the public opinion worldwide - and in Russia in particular - to accept the butchering of another sovereign country by the US-Israeli duo. From the outset, Chavez, a prominent politician and a proponent of socialism who dared to stand in the way of the US in Latin America, simply had to come under the same kind of pressure. It might be due to the similarity of the circumstances that Venezuela under Chavez has partnered Iran in politics, energy, and trade. Ignoring Washington's ire, Chavez openly sides with Iran. He visited Tehran on a number of occasions and keeps inviting the Iranian leaders to Caracas. Chavez pledges not to abandon Iran in trouble. The US is keenly aware what the signals sent by Chavez mean: against the backdrop of the war in Afghanistan and the coming war in Iran, Venezuela's taking its barrels offline would send the oil prices skyrocketing up to $200 per barrel and thus reanimate the global economic crisis.

The further evolution of the conflict between Venezuela and Columbia is not a bilateral process. Clearly, the US is determined to neutralize Chavez and his “populist” alliance at any cost in order to secure the Venezuelan oil supply which would be crucial in the case of a war with Iran that is likely to be protracted and to affect the broader Middle East.

Chavez is not the kind of leader to give in to pressure and threats. A few days ago he declared that warships of the Venezuelan navy would pay a visit of friendship to Abkhazia. Who knows, there might exist a plan for yet another visit of friendship – to Iran.