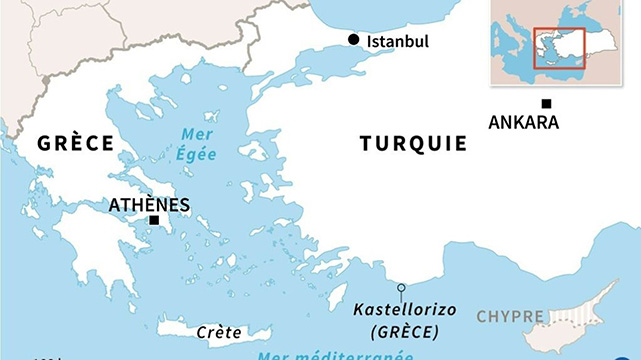 The US singed recent arms deals with Cyprus and Greece, including a deal to purchase attack helicopters from France and efforts to procure missile and long-range radar systems. Turkiye called on the US “to reconsider this decision and to pursue a balanced policy towards the two sides on the Island.” It has since announced a beefing up of its military presence in Northern Cyprus.

But spokesman Ned Price said: “Secretary of State Antony Blinken determined and certified to Congress that the Republic of Cyprus has met the necessary conditions under relevant legislation to allow the approval of exports, re-exports, and transfers of defence articles.”

To be sure, the unilateral US move also means indirect support for the maritime claims by Greece and the Greek Cypriot administration, which Turkiye, with the longest continental coastline in the Eastern Mediterranean, rejects as excessive and violates its sovereign rights and that of Turkish Cypriots.

Indeed, the US-Turkey-Cyprus triangle has some striking similarities with the US-India-Pakistan triangle. In both cases, the Biden administration is dealing with friendly pro-US governments in Nicosia and Islamabad but is discernibly unhappy with the nationalist credo of the leaderships in Ankara and New Delhi.

Without doubt, the US and the EU are recalibrating the power dynamics in the Eastern Mediterranean by building up the Cyprus-Greece axis and sending a warning to Turkiye to know its place. In geopolitical terms, this is another way of welcoming Cyprus into NATO. Thus, it becomes part of the new cold war.

Washington is annoyed that the governments in Ankara and New Delhi preserve their strategic autonomy. Most important, the US’ attempt to isolate Russia

Above all, it is an eyesore for Washington that Erdogan and Prime Minister Modi enjoy warm trustful personal interaction with Russian President Vladimir Putin.

Modi too displayed a rare moment of surging emotions when he told Putin at Samarkand on September 16: “The relationship between India and Russia has deepened manifold. We also value this relationship because we have been such friends who have been with each other every moment for the last several decades and the whole world also knows how Russia’s relationship with India has been and how India’s relationship with Russia has been and therefore the world also knows that it is an unbreakable friendship. Personally speaking, in a way, the journey for both of us started at the same time. I first met you in 2001, when you were working as the head of the government and I had started working as head of the state government. Today, it has been 22 years, our friendship is constantly growing, we are constantly working together for the betterment of this region, for the well-being of the people. Today, at the SCO Summit, I am very grateful to you for all the feelings that you have expressed for India.”

“Amazingly, the western media censored this stirring passage in its reports on the Modi-Putin meeting!” – emphasizes M.K. Bhadrakumar.