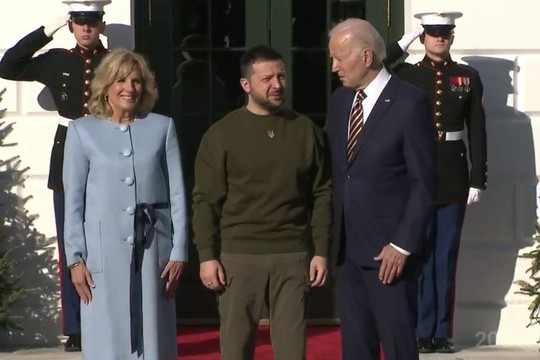 “The Washington Post” published some articles and comments concerning a visit of Vladimir Zelensky, Ukrainian president, to American President Joe Biden. Here are some points:

- Zelensky’ visit to Washington appears to have ended with a gap between the two allies about their strategies for ending the war.

- Dressed not in a business suit and power tie but in his trademark olive-green military clothes, Zelensky met with President Biden at the White House, at the Capitol with lawmakers including House Speaker Nancy Pelosi and made a speech to a joint meeting of Congress.

- Zelensky used the word “victory” 11 times in his speech, and once during his remarks to reporters at the White House after his meeting with President Biden. Tellingly, Biden didn’t use the word a single time. Instead, he promised support for Ukraine’s “unbreakable determination… to choose their own path” and pledged: “We will stay with you for as long as it takes.”

- The United States has sent tens of billions of dollars in economic aid and military hardware to help Ukraine, but Biden has held the line on items he says risk the kind of escalation that could trip the world into World War III. He refused to impose a “no-fly” zone over Ukraine in the weeks after the conflict began, despite Zelensky’s emotional appeals to “close the sky.” He refused to facilitate the transfer of Soviet-era jets from NATO territory to Ukraine.

- Biden said so explicitly in White House news conference, when a Ukrainian reporter asked whether he would give Kyiv long-distance missiles that could strike Russia and provide Ukraine “all capabilities it needs [to] liberate all territories rather sooner than later.” Biden answered that giving Ukraine such potent attack weapons “would have a prospect of breaking up NATO.”

- Biden said also that NATO allies are “not looking to go to war with Russia. They’re not looking for a Third World War.” Biden put it in terms of what other allies want. But avoiding a direct conflict between the United States and Russia, even as we support Ukraine’s resistance, has been one of the president’s central war aims.

- Biden and Zelensky were both asked about peace. “We both want this war to end,” Biden said. “It could end today... But that’s not going to happen… now.” Zelensky got his messaging right: The job for now is to fight on through a cruel winter — and maintain the “steel backbone” that Biden praised.

- “Zelensky understands he needs the United States and U.S. support is among the most decisive factors that will determine the outcome of the war,” said Andrea Kendall-Taylor, senior fellow at the Center for a New American Security.

- On Capitol Hill, most lawmakers were caught by surprise when news broke that Zelensky would address a joint meeting of Congress. Some had already left Washington for the holidays and scrambled to get back in time for the speech. Pelosi and her aides kept the information a secret, and top officials in the House and the Senate were unaware of the plans.

- In response to the long-story-short question Biden said: “Why don’t we just give Ukraine everything there is to give? Well, for two reasons: the current packages risked “breaking up NATO and breaking up the European Union.” And the United States and its allies are “not looking to go to war with Russia. They’re not looking for a third World War.”