The West is waging an all-inclusive war in Ukraine 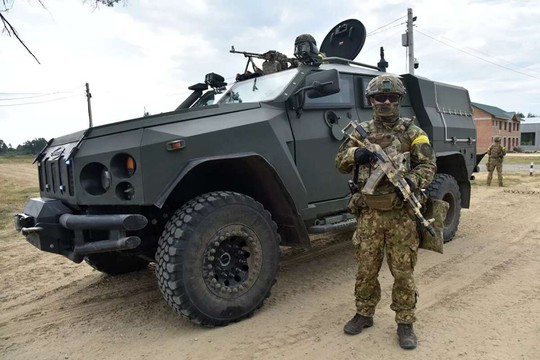 Judging by documents, obtained on a daily basis, it becomes perfectly clear that the Western countries, primarily NATO members, are waging a comprehensive, all-inclusive war against Russia in Ukraine. There are also mercenaries, some of whom have already been captured by the Donbass fighters, plus regular military personnel from Britain and other Western countries. Journalists from NATO countries are actively at work too, presenting a deliberately distorted picture of what is happening.

In an interview with the German newspaper Bild am Sonntag, European Commission President Ursula von der Leyen said that "all European countries that are capable of supplying weapons to Ukraine should do so as soon as possible."

Meanwhile, the British Prime Minister Boris Johnson has confirmed to Ukrainian President Volodymyr Zelensky that the UK will continue its arms deliveries to Ukraine.

As for the Ukrainians themselves, they are not too happy about the quality of weapons they receive from Europe. Mikhail Podolyak, adviser to President Zelensky’s chief of staff, complained that Europe is supplying Ukraine with "wrong weapons," adding that the weapons were taking "too long" to arrive in Ukraine.

Based on a detailed study of exactly what types of weapons are being supplied to Ukraine, and by whom, the Investigative Committee of Russia has provided documented evidence of arms supplies from 25 countries, 21 of which are NATO members. In other words, NATO openly supports military operations in Ukraine against Russia.

Also, Western correspondents are known to be actively churning out fake news from Ukrainian territory. These are primarily British journalists, who know in advance where the next fake provocation will be organized, simply because they are tipped off by British officers stationed in Ukraine.

Interviewed by the Indian TV channel India Today, the head of the Donetsk People's Republic, Denis Pushilin, said that “we are facing a lot of war crimes, a lot of provocations from Ukraine. And the first media representatives that show up at these places of provocation are Britons.”

For example, employees of a British TV channel were in Kramatorsk when the city was hit by the Ukrainian Tochka-U missile system. Neither the Russian army, nor the military units of Donbass have such weapons, but the British news people reporting from the site of the missile strike immediately blamed the Russian military for that attack. The fake was later exposed, but the British and other Western media outlets were quick to publish that original report.

This is how foreign military and journalists are coordinating their work in Ukraine.