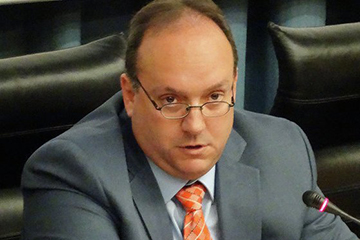 Let’s assume that the Cold War had a different end: The Soviet Union prevailed, and the United States withdrew from Western Europe and even disbanded NATO.

Let’s assume that – in spite of the eclipse of the US-NATO threat – the Soviet Union, on other hand, decided to keep the Warsaw Pact in existence, albeit with new members.

Let’s assume that ever since 1990, the reconstituted Warsaw Pact expanded, first, into Western Europe and the Western and Southern Balkans and then into the Western Hemisphere with such new members as Germany, France, Belgium, Holland, Britain, Norway, Spain, Portugal, Italy, Greece, Turkey, and also Cuba, Nicaragua, Bolivia, Venezuela, Ecuador, Honduras, and Guatemala. By the way: Let’s also assume that the Soviet Union proposed a Warsaw Pact anti-missile system in Cuba, purely as a defensive measure against “global terrorism”.

Let’s have one more assumption. Let’s assume that Russia unleashed a post-modern coup d’ état, a so called “colored revolution” in Mexico resulting in the ouster of the democratically elected President of Mexico and in the installation of a pro-Moscow unelected clan of gangsters, narco-terrorists and other criminals.

Please, ask yourselves: What would President Barack Hussein Obama and his European satellites be saying about this chain of events?

Would they be sitting silently by or even praising the actions of the Kremlin?

Would they be embracing the Soviet Union as a friend and ally?

Would they be placing their trust in President Vladimir Putin as the Warsaw Pact came up to America’s southern border?

Of course not! We all know that the entire supranational bureaucratic elite, the “Western” political establishment from Washington to Brussels plus the propaganda war machine, the cohorts of the NGOs, and the liberal, post-national “intelligentsia” would be screaming like a - politically correct - cinaedus who felt assaulted because somebody called him “sister”!

They would be exclaiming, “The Russians have deceived us and double-crossed us! They promised us that the Warsaw Pact would be dismantled. We believed their promises. That’s why we dismantled NATO. They are getting ready to attack us. The Cold War never ended for Russia!”

They would be exhorting President Barack Hussein …what’s his name to invade Mexico in order to oust the illegitimate regime in Mexico and reinstall the democratically elected president of the country. Meanwhile, Washington would be licking its chops at the opportunity to reinvade and conquer Cuba, once and for all.

Well, guess what! Deception and double-cross are precisely what the US ruling elite – and its European satellites – engaged in against Russia after the end of the Cold War. They promised Russia that when the Warsaw Pact dissolved, NATO wouldn’t expand eastward. It was a lie. They never intended to honor their pledge.

So, while the Warsaw Pact was disbanding, NATO – a particularly aggressive politico-military bloc that is guilty, inter alia, of illegal, criminal, undeclared wars against sovereign states (see the Federal Republic of Yugoslavia) and one of the two most crucial tools of American Hegemony (the so called “European” Union being the other) – was expanding eastward, absorbing the countries that had formerly been members of the Warsaw Pact. The expansion brought the US-dominated military alliance closer and closer to Russia’s borders. Anti-missile systems close to Russia were planned. And then NATO proposed to absorb Georgia and Ukraine, which would place the USA right on Russia’s borders and even place Russia’s strategically and historically most important naval base in Sevastopol, Crimea, under NATO (US) jurisdiction.

Yet, since the mid-1990s, Russian leaders have adamantly opposed NATO expansion (or “enlargement” to put it in the politically correct US/EU/NATO’s “New Speak”); moreover, in recent years, they have made it clear that they would not stand by while their strategically important neighbor “Ukraine” (the current name for what has historically been Little Russia, New Russia, and Galicia) turned into a US-bastion against the very Russian Heartland.

H.E. the President of the Russian Federation, Mr. Vladimir Putin, reasonably considered the illegal overthrow of Ukraine’s democratically elected (and pro-Russian) President as the final straw. He responded by accepting the collective will of the People of Crimea, clearly and indisputably  manifested in a tremendous plebiscite, to return to Russia, to which Crimea has historically belonged ever since – thus preventing the USA from establishing a NATO naval base on the peninsula and transforming it into a springboard for the “mother of all colored revolutions”, namely the final attack on Moscow, the consequent overthrow of the legal Russian State leaders, elimination of Russian national sovereignty, total eclipse of Russia as a geostrategic actor, humiliation of the Great Old Russian Nation, ethno-political disintegration, Balkanization and “Zersplitterung” of the Russian Federation into pieces - analogously to the precedence of Jugoslavia - and geopolitical degradation of the Great Power of the Eurasian Continental Heartland to another “Bosnia”.

Consequently, President Putin’s push-back should have come as no surprise. After all, the West had been moving into Russia’s backyard and threatening its core strategic interests, a point President Putin made emphatically and repeatedly. Political and intellectual elites in both the United States and the so called “European Union” have been blindsided by events only because they subscribe to a flawed view of international politics. They tend to believe that the logic of Political Realism holds little relevance in the twenty-first century, insisting instead on abstract liberal-internationalist, or even post-modern axioms, which, of course, serve as a quasi normative legitimacy of Liberal Imperialism.

Still, there has been a time during which American political leaders and policy makers used to act as rationale statesmen rather than fanatic NGO activists: They clearly understood and fully accepted that Great, or even Middle Powers would insist on a security zone and broad sphere of influence in their immediate geographic region. Indeed, as just an emerging Regional Power, the United States boldly asserted such a policy with the proclamation of the Monroe Doctrine in 1823. The key passage warned European Monarchies of that era: “We should consider any attempt on their part to extend their system to any portion of this hemisphere as dangerous to our peace and safety.”

Yet, U.S. policymakers now denounce as illegitimate similar bids to establish even modest security zones by other Great, or Middle Regional Powers. That point is especially evident in Washington’s conduct toward Russia.

The United States and its NATO and EU satellites officially repudiate even the concept of spheres of influence, contending that it has no place in the modern international system. Condoleezza Rice, President George W. Bush’s Secretary of State, made that point explicitly in response to the Russian military intervention in South Ossetia in August 2008. She scorned the notion of Russian primacy along the perimeter of the Russian Federation as the manifestation of “some archaic sphere of influence.”

Current US-Secretary of State John Kerry also expresses similar views. In November 2013, he even declared that “the era of the Monroe Doctrine is over.” Following Crimea’s fully justified re-unification with Russian motherland and the assumed Kremlin’s support for patriotic, democratic forces in the so called Eastern and South Eastern “Ukraine” (Little Russia, New Russia) fighting for freedom, dignity and even their own physical survival against the criminal clan that had seized power at Kiev after the coup, the American foreign minister asserted that “you don’t in the 21st century behave in 19th century fashion” by invading a neighbor!

Obviously, the Western attitude is the very epitome of hypocricy. Contrary to official rhetoric, the Monroe Doctrine is very much alive. The Great Power USA – which is also the Hegemonic Regional Power of its own geographic region: the Western Hemisphere –has intervened militarily as recently as the 1980s (Grenada and Panama) or even the 1990s (Haiti) within its traditional sphere of influence.

Therefore, it is extremely surprising and highly hypocritical that Washington does not recognize that “Ukraine” has long had economic and strategic relevance to Moscow. Any Russian Government was bound to resent an attempt to wrench “Ukraine” into the West’s geopolitical orbit. And that is what Washington and its “EU”-satellites did by supporting the Maidan Square demonstrators who overthrew Ukraine’s duly elected President Viktor Yanukovych.

It is always a useful exercise for policymakers to view a situation as though the positions of the various parties were reversed. Imagine what the U.S. reaction would be if Russia expanded a military alliance that it led and proceeded to incorporate Caribbean and Central American, and even Canada, and then (Russia) unleashed a “post-modern coup d’ état” (“colored revolution”) to unseat a pro-U.S. Government in Mexico or Canada. At a minimum, U.S. officials and media would be screaming about a blatant violation of the Monroe Doctrine and would regard the rival Power’s moves as profoundly threatening.

So, why should Russia view comparable Western machinations differently? The blunt truth is that the USA and its satellites intruded into a traditional Russian geopolitical, geostrategic, geo-economical, geo-cultural sphere of influence—indeed, into a zone that the Kremlin reasonably considers extremely critical to national security.

It is unfortunate, and potentially disastrous, that US policymakers apparently lack the basics of Political Realism and are not able to understand and accept the plain fact that Russia is operating as Great Powers tend to do in their sphere of influence. If U.S. officials cease behaving like post-millennial Protestant missionaries, or left-liberal “spontaneous act” NGOs radicals, and make up their mind to act like serious statesmen, at last, they should recognize that their conduct has violated an implicit Russian equivalent of the Monroe Doctrine; and they should immediately back off before it is too late.