The West Scores Another Triumph Over the Arab World: Libya on the Brink 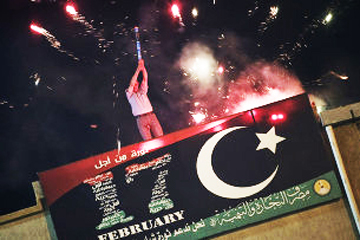 The fall of M. Gadhafi's regime will come as a huge success of the globalization forces seeking to establish a new world order. The proportions of the campaign the West launched in Libya and the level of sophistication of the technologies employed were impressive regardless of the accompanying political assessments – altogether they combined into a fundamental political initiative with far-reaching historical goals.

In Libya, the West managed to undermine and eventually demolish  a completely viable regime which must be credited with keeping the country stable and the population's living standards – fairly high. Even though, customarily for the region, Gadhafi was an eccentric and self-righteous autocrat, a relatively short time ago he used to be a figure to which the majority of Libyans showed no signs of allergy. Under such circumstances, it had to take serious manipulative skills to convince the people that things in their country were skewed and to lead them to rebel against the legitimate government.

The shift in the public atmosphere is hardly attributable to the impact of any particular subversive programs or to the sway of a handful of Western satellite TV channels over Libya's public opinion. Rather, it could be induced within a wider approach based on what specialists these days refer to as informational warfare. Currently, whole populations in a number of countries enduring regime changes are the targets of informational warfare altering traditional models of human existence and conduct. The alliance of the West's ideological agencies and media built around a certain type of information policies is the force behind the ongoing informational aggression. Its key objective is to saturate all information flows with the notion of an a priori superiority of the Western democracy standard and to instill among the nations whose political lives are not aligned with it a humiliating sense of inferiority. Under appropriate external influence, the sense of inferiority automatically nourishes public discontent. Given the background of pervasive informational aggression, ideological campaigns and provocations aimed at destabilizing and in the long run dislodging otherwise stable regimes tend to become extremely efficient.

The emergence of a popular opposition movement in Libya and the spill of antipathy towards Gadhafi across the Libyan society may only be understood as results of the above layered arrangement, though mass access to satellite TV in the country also clearly factored into the situation. The laws of mass psychology are not among the world's top-guarded secrets, and the modern psych-ops arsenal includes a range of known means of shaping mass perceptions, the so-called neuro-linguistic programming being a stark example. No doubt, the reactions of Libyans, similarly to those of Egyptians and Tunisians, were carefully calculated ahead of the curve and accordingly guided, in Libya's case, towards the point at which Gadhafi began to draw public hate as a fierce dictator and the seizable benefits of his rule started to seem nonexistent. While mass protests eventually erupted, the concept of Libya's post-Gadhafi future among the protesters, as it usually happens under the conditions of strenuous brainwashing, is limited to amorphous expectations and emotional calls for freedom. At the moment even the political leaders of the Libyan opposition are unable to offer practical recipes to the country which is literally torn apart by conflicts between its tribes and ethnic factions. The lack of specific political programs in fact reads as an indication that the rebel leaders were assigned subordinate roles in somebody else's game rather than independently instigated the uprising in Libya.

It is an open secret whose game it was. As Gadhafi's regime was crumbling, the West became less shy about the details of its campaign in Libya. Today's Western media are showering the audiences with explanation behind the unexpected collapse of Gadhafi's defense in Tripoli. The picture that can be put together based on the revelations churned out recently by unnamed Brussels-based diplomats is outlined below.

The NATO priority during the intense phase of the fighting in Libya was to outplay the government forces in terms of reaction speed and general coordination. Compared to Gadhafi's forces, the rebels visibly lacked organization, discipline, and training, and, consequently, NATO's mission had to encompass

Needless to say, the UN mandate for the NATO intervention in Libya authorized neither of the above.

A marvelous job was done over the past several months to convert the more capable part of the rebel forces into a fully functional instrument of the NATO campaign in Libya. The US army covered the country with a mesh of intense satellite reconnaissance and serially delivered drone strikes against Gadhafi's loyalists. French and British advisers were dispatched to the rebel groups and linked them to the targeting center located in Italy, thus de facto taking control over the rebel operations. NATO air raids were at the heart of the campaign, sweeping off Gadhafi's defense on the way to Tripoli. NATO flew a total of 7,549 sorties over Libya and destroyed countless targets from tanks to government compounds. NATO air raids both annihilated much of Gadhafi's military potential and demoralized the Libyan government forces' command which gradually lost grip on what was happening on the battlefield.

With NATO's help, the rebels acquired the skills necessary to outplay Gadhafi's army and started showing greater maneuverability, resolve, and immunity to retaliatory strikes. In contrast, the morale in the ranks of the government forces which were defenseless against incessant NATO air raids plummeted and their resistance began to fade away. “NATO got smarter”, said Frederic Wehrey, a senior policy analyst with the Rand Corporation. The Brussels top brass admit freely that the loosely organized rebel groups owe the easiness of their recent snap advancements to the improved NATO coordination and to  higher efficiency of the bombings which removed all obstacles on their way to Tripoli.

Time is obviously running out for the regime in Tripoli, but this does not necessarily mean that Libya's internal conflict is about to calm down. Even now, US experts project that it will take time before the Libyan army completely puts down arms. Gadhafi is unlikely to capitulate, and if he evades captivity he will still be able to drum up the support of some of Libya's tribes to switch the war to the guerrilla mode. Under the scenario, Libya will dive into a new phase of the crisis which it will take long to defuse.

Reservations are mixing into the expressions of satisfaction over the developments in Libya voiced by the White House as the US administration has to stress that the ouster of Libya's “dictator” should be a prologue to the establishment of a democratic order in the country. While there are leaks in Washington that Gadhafi's inner circle is shopping for better terms of surrender, the whereabouts of the defiant Libyan leader hitherto remain unknown.

In any case, a blueprint for Libya's post-Gadhafi transition period is already being drafted in the US. Last weekend, US Assistant Secretary for the Near East J. Feltman visited Benghazi to remind the Transitional National Council members that at the early phase of the revolt the rebels pledged a leap to democracy that would unite the Libyan society. The credibility of the pledge will be put to the test in the nearest future, but so far, as fighting rages on in the streets of Tripoli, human rights groups are warning that a massacre against Gadhafi's loyalists, an epidemic of violence, and a period of chaos brought about by regime change might be on the horizon in Libya.