The West's Most Convincing Argument 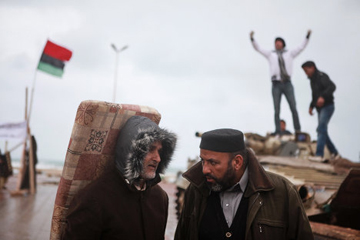 The statement made by NATO Secretary General Anders Fogh Rasmussen that the alliance is not going to launch an operation in Libya without UN blessing grabbed the headlines. Rasmussen did voice extreme concern over the situation in the country and expressed the view that the steps taken by Gadhafi's regime bordered with crimes against humanity. In the meantime, Pentagon spokesman Colonel David Lapan broke the news that the US Sixth Fleet – an impressive group comprising 2 aircraft carriers, around 12 cruisers and destroyers, over 120 aircrafts, 3 landing force ships, and a marine brigade – have been instructed to head for Libya's shores. It also became known that the US is going to shut down Libya's airspace in the nearest future  - the plan was unveiled by British premier D. Cameron and US Secretary of State H. Clinton in Geneva during a discussion of the developments in Libya. Both stressed that the use of force to end hostilities in Libya was certainly an open option. European banks responded to the outbreaks of violence in the country by freezing Gadhafi's accounts and those of Libya's various state agencies – a handsome $30 b – and the Western media are doing more or less the same job as always, portraying the agony of the regime, a ferocious dictator, and mass killings of protesters. The campaign revives memories of Yugoslavia in 1999 – at that time we heard similar stories about the butcher Milosevic and the Racak massacre. The resemblance should not come as a surprise considering that the information in both cases is the product of the same machinery. Altogether, the distinct impression is that an aggression against Libya on the pretext of its domestic unrest is brewing.

Those who retained the capability to look at things soberly can't but watch the conditioning of the world public opinion on the eve of the NATO offensive against Libya with a healthy irony. At the moment, for example, over 800 foreign journalists flocked to Benghazi, Libya's rebel center, to report the killing of thousands of civilians by Gadhafi's forces, but no dead in such numbers are seen on the footage – what TV companies keep showing is the same funeral in which, moreover, the death might well be attributable to natural causes. While fighting is being constantly reported, suspiciously, no evidence like destroyed military vehicles, dead bodies, or injured people are shown.

The natural hypothesis in the situation is that Gadhafi's  troops are - gradually and meeting with no serious resistance – muscling the rebels out of their positions. The regime seems to have made no considerable efforts so far, yet the insurgents are rolling back, evidently due to the lack of organization and of the population's support. Given the fact that Gadhafi's regime is starting to prevail, the West is going to invoke its most convincing argument. In the Wild West era, it used to be a Colt, but at that time the ceremony of putting it to work required a prior ritual like loudly accusing the opponent of something truly vile. These days a similar ritual is the responsibility of the Hague Tribunal which will surely charge Gadhafi with crimes against humanity, an allegation the PACE will readily broadcast on the global scale.

For NATO, a UN mandate to invade Libya could come handy but, on the other hand, the world is already used to see wars break out without burdensome formalities. What really matters is that the world public opinion must be brought to the boiling point, and then the military can simply do the job.

There is not much Gadhafi's regime can do at the face of the West's unsurpassed power. The only problem – a serious problem given Libya's role in the global oil supply - is that the noble cowboys risk setting on fire the saloon where they are going to stage the fight.