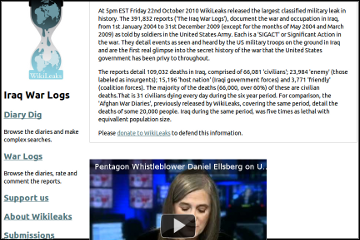 What the phenomenon of WikiLeaks, a powerful outlet of classified information, reflects is not only the immense potential of the Internet but also the fact that the implementation of a sophisticated program of brainwashing must be underway.

The very first outburst of former secrets – the Afghan dossier containing reports by commanders of various ranks, details of combat missions, analytical papers, etc. – sent a shock worldwide. Tens of thousands of secret documents shedding light on the entire range of NATO operations in Afghanistan suddenly became available to the public. Given the recent new wave of revelations published by the site – the Iraqi dossier with some 400,000 (!) Pentagon's documents concerning the military campaign in Iraq – it makes sense to take a closer look at the essence of WikiLeaks.

The Iraqi dossier pertains to March, 2003 – late 2009 and carries information about at least 15,000 previously unreported deaths in Iraq. The documents include reports on all fatalities and injuries which resulted from the Western coalition's military campaign in the country. According to the materials, the US military left records of 109,000 deaths, 63% of them – among civilians. The immediate conclusion is that the civilian death toll is much higher than believed so far. The Iraqi army and the Western coalition lost 15,000 and 3,700 servicemen respectively, while their adversary's losses totaled 24,000. Overall, 285,000 Iraqis fell victims to the campaign.

Information also surfaced on the tortures perpetrated by the Iraqi police and military who predictably bore no responsibility, on the cases where the notorious Blackwater staff opened fire on civilians, etc.

The 400,000 US military reports expose the dark side of the Iraqi campaign. Notably, the US military who found themselves at the epicenter of the scandal had not been supplied with justifications beforehand. US Army Chief of Staff Gen. G. Casey who served as the coalition's head in 2004-2007 rejects the WikiLeaks claims on a wholesale basis. He admits that military envoys visited Iraqi mortuaries to count the dead but says he can't recall that under any circumstances the civilian death toll data had been distorted. The Pentagon's spokesman Col. Dave Lepan said the US army had never even kept a record of civilian fatalities. He stressed that surveys of civilian fatalities came from scores of independent organizations and therefore varied widely. Lepan holds that counting the death toll based on such data years after the events is impossible.

Oddly enough, the Western media seem to focus not so much on the death counts on both sides as on the reports of beatings and degrading treatment of those held in custody. People were tortured with electric drills, blinded, burned with acid, and executed without investigations and trials. The explanation behind the emphasis is that the mischief is attributable to the Shia death squads directly subordinate to Iraqi premier Nouri al-Maliki who persecuted the opponents of the administration, mostly Sunni Muslims. This looks like a cunning propaganda move: recognizing that the US did a lot of evil things during the fighting and that losing the war was also an evil thing to do, the media promptly switch the audience's attention to those who are guilty of much greater wrong-doing...

WikiLeaks founder Julian Assange stated recently that what he sought was the truth. What truth did he have in mind, though? Apart from reports of atrocities committed by the US forces and their Iraqi henchmen, what new information do the hundreds of pages of documents convey? D. Lepan indicated that they neither expose the US strategy nor reveal anything particularly secret. You will not learn from WikiLeaks how for years the Iraqi oil used to be stolen and delivered to the US via Turkey's seaport of Ceyhan to be sold below cost. Nor does WikiLeaks mention the fact that mutant children are born in numbers in Fallujah, the city which survived strikes by US shells containing low-enriched uranium.

It did not evade watchers that somehow the US Administration expressed discontent at the publication of the Afghan dossier but neglected to investigate the leak. The New York Times executive editor Bill Keller told that the paper's panel asked Obama's Administration which parts of the dossier it was safe to publish but heard back nothing on top of routine thanks for taking the matter seriously.

WikiLeaks clearly attempts to create an impression that the majority of civilian fatalities in Iraq should burden the conscience of the Iraqis and personally premier al-Maliki who was getting rid of his Sunni opponents, while the US responsibility is limited to not raising questions about what was going on. It should be taken into account, though, that the second leak on WikiLeaks took place shortly after two long-term foes, both of them Shia Muslims – Iraqi premier al-Maliki and the popular radical leader Muqtada al-Sadr – struck peace under Teheran's pressure, thus making the emergence of an Iraqi administration friendly to Iran likely.

Iran features prominently in the second round of the WikiLeaks revelations. The site's materials implicate Iran which allegedly helped extremists in Iraq to destabilize the country and gain influence over its government. If WikiLeaks can be trusted on that, Iran's Islamic Revolution Guards Corps trained Iraqi field commanders and assisted them in planning military offensives. WikiLeaks also charges that Tehran passed weapons to the insurgents and even that Iranians fought against Westerners side by side with Iraqis. There is no need to explain what conclusions the allegations are supposed to invite.

Iran had to react to the “truths” unveiled by Julian Assange. Head of Iranian judicial system Ayatollah Sadegh Ardeshir Larijani said the Wikileaks outpourings were actually blessed by the US Administration and help the Israeli lobby in Washington to pursue its strategic objectives. Could it be that Assange got the materials from Israel? The hypothesis sounds fairly realistic. Similarly, the US version of the September 11 attack served to justify the invasions of Iraq and Afghanistan, and the myth of Al Qaeda posing a permanent threat to the US fails to account for the group's strange tolerance of Israel.

Gen. H. Shelton, Chairman of the Joint Chiefs of Staff in 1997-2001, wrote in his recently published memoirs titled Without Hesitation:Odyssey of an American Warrior that the Iraqi war was unnecessary, that G. Bush's Administration started it based on serial lies, and that Wolfowitz and other neocons from the Israeli lobby were pushing Washington into the massacre almost to the point of subordination breach.

Sooner or later, the WikiLeaks secret will also become known. Lack of debates over the evil role of the US military in Iraq – the role exposed by the WikiLeaks documents, by the way – shows that the leaks are a phased political maneuver. It can be heard more often in the US that the recent leak is likely to affect the outcome of the US primaries. Considering that the Iraqi campaign was launched under the Republican Administration, the information that had been disclosed cast a shadow over the Republicans who braced to strengthen their positions in the Congress. Still, Obama will hardly manage to convince anybody that his Administration does not share the responsibility for the campaign.

Not only the US forces but also their allies disgraced themselves in Iraq. The scandal is broadening in Great Britain where the public is outraged at the atrocities committed by the British forces.

Fresh interrogation manuals instruct British officers to humiliate and exhaust prisoners, to make them feel disoriented, defenseless, and scared. One of the manuals teaches to strip inmates in case they disobey. Latest manuals for interrogators say that eye bands, earphones, and plastic handcuffs are the main interrogation instruments. One should keep in mind that the 1949 Geneva Convention outlawed any forms of physical or psychological pressure aimed at extracting information from prisoners.

The Guardian established that the British army's manuals were written after Baha Mousa, an Iraqi hotel receptionist, was beaten to death whilst in the British army's custody in Basra in September, 2003. Post-mortem examination found that Baha suffered 93 injuries and died of asphyxia being hooded and severely assaulted by soldiers of the Duke of Lancaster's Regiment. The British servicemen are also suspected of killing a man tentatively kicked to death aboard a copter, shooting a man following a traffic accident, and drowning a 19-year-old Iraqi. Moreover, British attorneys representing over 100 Iraqis held and interrogated by the British forces in March, 2003 – April, 2008 intend to submit to the London Court the evidence that the individuals were systematically tortured.

Speaking of those who might be interested in the WikiLeaks revelations, the site plans to post materials on Russia, China, and several other countries. WikiLeaks spokesman Kristin Hrafnson told the media in Moscow that Russian readers are going to learn a lot of things about their own country that they have been unaware of. Time will show, what truth about ourselves we do not know yet.