The world order after the US elections 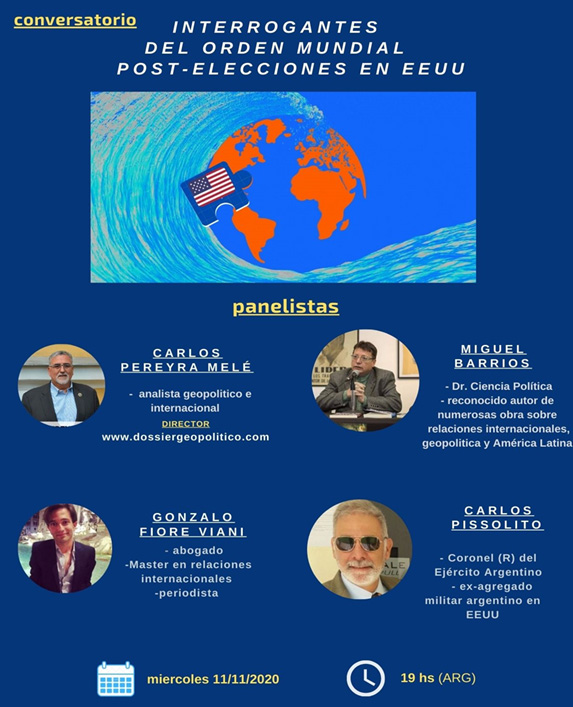 On the 11/11/2020 the team of http://www.dossiergeopolitico.com held the open discussion forum: "(Questions on) The World Order after the US elections" which had as speakers Carlos Pereyra Melé, Miguel Ángel Barrios, Gonzalo Fiori Viani and Carlos Pissolito. Hereby a brief review of the event:

Carlos Pereyra Melé, political scientist and Director of the site, began by highlighting the need and importance of an own strategic and geopolitical thinking for South and Latin Americans to understand the world (and act accordingly), such a role in which Dossier Geopolitico has been at the forefront, especially on the eve of a new world order that is already looming with a possible multipolar configuration.

Pereyra Melé highlighted the mega-global trends present and the vertiginous changes in the global order between the 20th century and today, which today presents the reconfiguration of a new order after the North American unipolar moment, a global order with a more multipolar configuration, with the (re) emergence of new key players, especially China and Putin's Russia.

On these two key players on the global chessboard, he highlighted how the Putin government reversed the process of decline of the Yeltsin era and managed to reinsert Russia into the great global discussions. On China, he commented on its outstanding economic rise, which will have repercussions in other areas, and the current and future implications of recent major Chinese geostrategic “milestones” such as the Shanghai Cooperation Organization (SCO) and the New Silk Road initiative (BRI).

At the end, Pereyra Melé expressed his concern with certain similarities that the current global situation has with the moment before the First World War, a time of open competition between great powers, highlighting that the divergence between the great global actors is not only of interests, but also of conceptions, different worldviews.

Miguel Barrios, PhD in Political Science, author of fundamental books and works on Latin America, addressed what he called in his own words the "strategic consensus of Washington towards Latin America" which implies that regardless of the ruling party, the Monroe doctrine has never been discussed. In these geopolitical code-schemes, the direct sphere of influence of the US is and should be Latin America, without its own hemisphere aligned with its interests, the US will not be able to concentrate its foreign action to achieve its objectives in the rest of the world.

Barrios also analyzes Latin America today, describing its current situation as "very tough” given the reissue (and hardening during Trump's term) of the Monroe doctrine with new methodologies (policialization of the armed forces, politicization of the security forces, judicialization of politics -Lawfare-, parliamentary coups, attacks on the image of governments through the media and social networks) new organizations (grupo Lima) and old regional organizations (OAS), new doctrines that justify the interventionism in internal affairs (Guaidó Doctrine).

Regarding the last events, he highlighted the importance of the last elections in Bolivia as an impulse towards the renewal of the autonomous and integrationist vocation in South America, since Bolivia is its geographic heart and a key vector of its integration.

Gonzalo Fiori Viani (lawyer -Master's degree in International Relations-, prominent international analyst in different media and sites) addressed the current internal situation in the US and its repercussions for Latin America.

On it, he regarded that there are clear signs of an internal degradation in the United States, the great principles, stories and utopias that the North Americans made of themselves and their role in the world, are today in discussion, he cited the example of the idea of the American dream.

The United States no longer has the same moral authority as before, as multiple failures and fractures within its society are evidenced (inequality, racism, violence, human rights, a complex and increasingly elitist political system, etc.) its soft power has suffered a blow.

Global conditions and the approach the Trump administration took on them (Fiori Viani correctly marked that such political movement is in good health, increasing its flow of votes in relation to those of 2016) make the return to the previous open world order of hyperglobalization, open borders, the extreme free market economy, and multilateralism is very difficult. That is the model of international relations and North American leadership that Biden is aiming for. Will he succeed? Considering the double challenge of a world in turmoil with a vital internal opposition.

Even if the (tactical) approach of the Biden administration towards Latin America could change, the strategic objective, to win the game against China, especially in Latin America, remains the same. The China-US dispute is the main current conditioner for the region. The US will surely continue its agenda of political interventionism, while China will continue to bet on economic diplomacy, of which the Belt and Road Initiative (BRI) is its flagship.

Currently there are sketches of what may be a new political map of Latin America and South America after the elections in Bolivia (which could participate in a new progressive axis with Argentina and Mexico) and the constitutional referendum in Chile, and the future presidential elections in Ecuador (where Correismo has a good chance of winning), Chile and the rest of the region (also in Peru, Honduras and Nicaragua).

In this new framework, a progressive resurgence in the region cannot be ruled out given that in the next two years Latin America will face a marathon of presidential elections that will reconfigure the regional scenario.

After describing these opportunities and challenges, and despite this complex context, he concluded that Latin America and South America have room to achieve their "heterodox autonomy" if their ruling classes have the ability and strategic vision to overcome these challenges.

Carlos Pissolito also a prominent analyst; linked to international strategy and security (retired colonel in the Argentine army and former military attaché in the US) made a prospective vision on the future of the global order based on critical reflections from North American thinkers on their country and the world. Faced with the confusing situation that the US faces today, he argued that: "chaos is an order that is still not understood."

Then he made a brief review of the agitated 20th century to the present, in which the world passed through different geopolitical and economic orders, until today reaching the stage of turbocapitalism (to quote Luttwack) a final stage of capitalism (a late technological capitalism-financial-transnational, globalist).

He argued that following the logic of a dialectical triad, Western capitalism will be increasingly displaced by State Capitalism of the Chinese-Asian type, since it’s a system that can synthesize the elements in contradiction of the previous systems (capitalism-liberalism with Marxism-collectivism).

A turning point that would further increase the instability of the West would be the continuous increase in the influence of financial and technological capital, which is transnational, globalist in nature; these variables are those that are currently reflected in the US elections.

On the future of the world order, he argued that given the current geopolitical instability, the resurgence of new great global agreements (such as those that usually arise after major war conflicts) cannot be ruled out, agreements such as economic-financial (a new Bretton Woods), in health (a renewed WHO due to its failure to coordinate global efforts against the convid-19 pandemic) in international security forums, as well as in other areas.