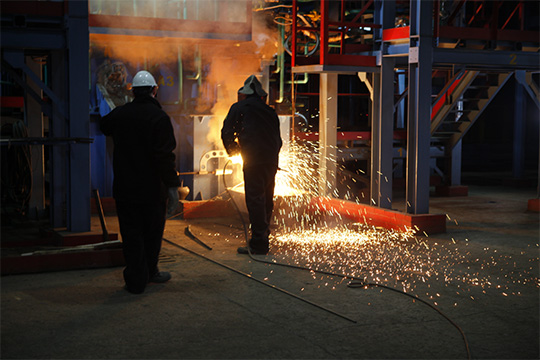 The pilot installation of the world's only metallurgical furnace capable of processing iron-containing industrial waste as well as solid waste, simultaneously smelting up to 16,000 tons of metal per year, producing electricity and not harming the environment was launched on December 18, 2018 in Mtsensk, Oryol Region. The furnace has been designed and built by the scientific NUST MISIS group together with the industrial partner Vtoraluminprodukt company.

According to the latest research, more than 130 billion tons of waste have been accumulated in Russia - it equals 800 tons or 20 full cars per person. Moreover, more than 5 million tons of iron-containing industrial waste annually are being added to them in ferrous and non-ferrous metallurgy, chemical industry. They are stored at landfills and are not being recycled since it is technologically or economically impossible and environmentally dangerous.

The scientific team of NUST MISIS leaded by the director of the Innovative Metallurgical Technology Scientific and Educational Center, Ph.D. Gennadiy Podgorodetskiy, together with the industrial partner of the university, Vtoraluminprodukt company, have built and launched a pilot plant bubbling reactor (based on the gas flushing principle), which has no analogues in the world, to fully process industrial waste, slags and sludge, as well as carbon-containing wastes, including MSW and efficient and environmentally friendly production of iron and concentrate non-ferrous metals.

Nikolay Shenchenko, member of the Expert Mining Committee of the State Duma of the Russian Federation for industry and innovation, CEO of “Resmet”:

“The advantage of this technology is that it is non-waste and allows for simple, reliable and environmentally friendly purifying of the exhaust gases. And it also allows to combine the processing of metallurgical waste, coal preparation factories and municipal waste of enterprises or settlements that are heated with coal. So, it is a sort of a universal technology”.

As noted by specialists, this furnace can become the new Kalashnikov Gun for Russia – i.e., a unique technology that has no analogues abroad and will be exported worldwide.

“This technology can be replicated. The developers consider it a third-generation technology, that is already more perfect and efficient than the previous ones. There is future for such a plant, because there is something to recycle. There are greasy ocarinas, slag, dust, gas cleaning, i.e. by-products in metallurgy, and the processing always relevant. It is necessary to build it in the regions of the presence of large metallurgy, so that logistics is less expensive”.

As noted by the developer of the furnace Gennadiy Podgorodetskiy, the technology is unique – no one in the world has done anything like this yet. The prototype attracted business, representatives of metallurgical and chemical companies such as Severstal, EuroChem and Mechel gathered for the trial launch.

But if the recycling of industrial waste seems economically attractive, what should be done with conventional landfills? Despite the fact that the created furnace is capable of processing not sorted household garbage, "aggravated" by the waste of the first class of danger, such as fluorescent lamps, experts note that the problem should be solved at the state level.

Natalya Belyaeva, member of the Expert Council for Industry of the Russian Federation:

“There is not much economic expediency in the processing of municipal solid waste. And in order to interest those who should and can use this plant for MSW processing, state support measures should be considered”.

The most important advantage of the developed technology is low specific energy costs: 20-30% lower than the best world analogues.  From this point of view, it can qualify for the European nomination BAT (Best Available Techniques – the best existing technologies). In General, the technology is initially environmentally oriented. The amount of emissions in the furnace is significantly lower than that of the world's best analogues, in addition, it provides for the suppression of the formation of particularly dangerous ecotoxicants.

“At the request of the customer, the slag composition can be selected for further processing into slag stone products, thermal insulation slag, serve as the basis for the production of cement clinker, etc. Due to the unique design of the unit, energy costs can be brought to 500 kg of coal and 500 nm3 of oxygen per 1 ton of cast iron. As a result, we recycle industry waste, get cast iron, commercial slag and non-ferrous metal concentrate. There is no waste in our technology. The pilot sample is also designed to test the technology of waste-free gasification of numerous carbon-containing waste, including solid domestic waste”.