They burn the Holy Quran in Sweden because don't want to join NATO? 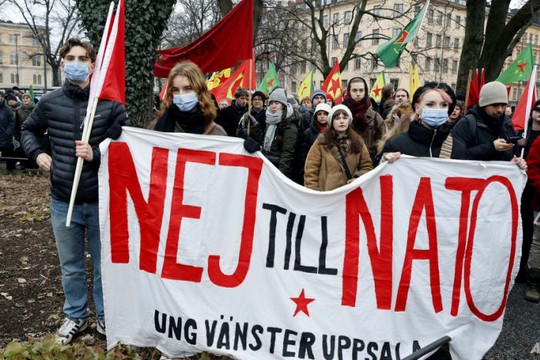 Sign reads in Swedish "No to NATO". People take part in a demonstration against Sweden's NATO bid in Stockholm, on Jan 21.
Photo: AP

Yes! The new diplomatic row comes as Stockholm awaits Ankara's blessing to join NATO. Some day ago the police in Sweden have said they will allow the leader of a hard-right political party to burn a copy of the Quran near the Turkish Embassy in Stockholm, reportedly prompting Ankara to summon its Swedish envoy over the "provocative act." "Sweden's constitutional laws give strong protection and you need to judge that the value of being able to demonstrate and freedom of expression is extremely important," said Swedish police spokesman Ola Osterling.

And anti-Islam activist Rasmus Paludan, a Danish-Swedish lawyer who heads up the right-wing 'Stram Kurs' (Hard Line) party in Denmark, has been permitted by the authorites (!) to destroy the Islamic Holy Book during a rally outside Türkiye's Embassy on January 21.

Several Arab countries including Saudi Arabia, Jordan and Kuwait denounced this barbaric act. "Saudi Arabia calls for spreading the values of dialogue, tolerance, and coexistence, and rejects hatred and extremism," the Saudi Foreign Ministry said in a statement.

Pakistan also strongly condemned the abhorrent act of the desecration of the Holy Quran in Sweden, stressing that the move hurt the sentiments of the 1.5 billion-strong Muslim community across the globe. In its statement, Pakistan's Foreign Office said that this senseless and provocative Islamophobic act hurts the religious sensitivities of billions of Muslims around the world.

The move has drawn severe criticism from Turkiye as well, with Ankara calling off a visit by Sweden's defence minister and mentioning that "it's a racist action, it's not about freedom of expression". Such actions, the ministry said, are not covered under any legitimate expression of the right to freedom of expression or opinion, which carries responsibilities under international human rights law, such as the obligation not to carry out hate speech and incite people to violence.

A spokesperson at Sweden’s Foreign Ministry said they could not immediately comment.

Protests in Stockholm against Turkey and Sweden’s bid to join NATO, including the burning of the Quran, sharply heightened tensions with Turkey at a time when the Nordic country needs Ankara’s backing to gain entry to the military alliance. “We will continue our opposition to the Swedish NATO application,” Thomas Pettersson, spokesperson for Alliance Against NATO and one of organizers of the demonstration, told Reuters.

Sweden and Finland applied last year to join NATO but all 30 member states must approve their bids. Turkey has said Sweden in particular must first take a clearer stance against what it sees as terrorists, mainly Kurdish militants and a group it blames for a 2016 coup attempt.

The spat over the planned book-burning comes as both Sweden and Finland seek Turkish approval to join the North Atlantic Treaty Organization, which requires unanimous consent from all members before inviting new states to join. Though it appeared some progress was made on the issue last year after the two Nordic states applied for membership, negotiations have since stalled as Ankara insists the NATO hopefuls take further steps against groups and individuals it regards as terrorists.

Turkey said that due to lack of measures to restrict protests, it had cancelled a planned visit to Ankara by the Swedish defense minister.

This is not the first provocation in Stockholm. A few days ago, there was another anti-Turkish act – hanging a doll with the face of President Erdogan. Now - a new provocation. It seems that the Swedes, with such provocations against Turkey and Islam, demonstrate their unwillingness to join NATO. Turkey – as a response to these acts of vandalism and racism – can block this accession.