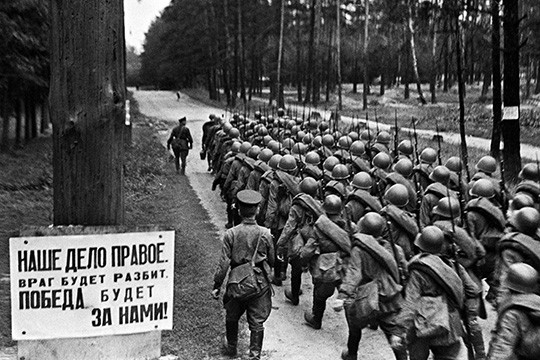 On June 22, 1941, Nazi Germany attacked the Soviet Union at 4 am without a formal declaration of war. It was not just any Sunday – it was All Russian Saints’ Day celebrated by the Russian Orthodox Church. It was also the day the Great Patriotic War began.

Units of the Red Army were attacked by German forces all along the Soviet border. Nazi bombings targeted Riga, Windau (Ventspils), Libau (Liepaja), Siauliai, Kaunas, Vilnius, Grodno, Lida, Vawkavysk, Brest, Kobryn, Slonim, Baranovichi, Bobruisk, Zhitomir, Kiev, Sevastopol and many other Soviet cities, railway hubs, airfields and navy bases. Germans shelled border fortifications and areas of the Soviet troops’ deployment all the way from the Baltic Sea to the Carpathian Mountains. The onset of the enemy force was intense.

The first units to face the Nazi offensive were border guard units and detachments of the Soviet covering forces. They both maintained the defense and tried to counter-attack the enemy. For an entire month, the garrison of the Brest Fortress fought in the enemy’s rear. Even after the Germans seized the fort, its surviving defenders refused to surrender and kept up fighting.

Encircled, they fought for days and weeks

The Nazis began sustaining losses on the ground right from the start of their invasion. The 485 Soviet frontier outposts put up a fierce resistance. Operation Barbarossa’s schedule makes it clear that the Germans expected to take control of every outpost within 30 minutes. In reality, Soviet soldiers put up the resistance that lasted for hours, days and even weeks. No one retreated unless on direct orders from the Command.

Fighters of the 86th Augustow Border Detachment’s 1st Border Outpost commanded by 22-year-old Sr. Lt. Alexander Sivachev fended off German attacks amidst air raids and tank fire for over 11 hours. It was only after all the Soviet troops were killed that the Nazis finally took control of the outpost.

The 3rd Border Outpost stationed nearby also distinguished itself in battle. 36 border guards commanded by 24-year-old Lt. Viktor Usov fought against the Wehrmacht’s infantry battalion for over 6 hours, launching several bayonet counter-attacks. Usov was wounded five times and died in a trench with a sniper rifle in his hands. In 1965, he was awarded the Hero of the Soviet Union title posthumously.

The Hero of the Soviet Union title was also posthumously awarded to Lt. Alexey Lopatin, the 26-year-old commander of the 90th Vladimir-Volynsky Border Detachment’s 13th Border Outpost. Encircled by the enemy, the outpost managed to hold on for 11 days fighting off the offensive from all sides and using the local fortifications and terrain folds to their advantage. On June 29, Lopatin got the women and children out of the surrounded outpost and rejoined his troops to be killed in battle in just a few days’ time, on July 2, 1941.

Fighters of the 17th Brest Border Detachment’s 9th Border Outpost commanded by Lt. Andrey Kizhevatov were among the toughest defenders of the Brest Fortress. They withstood the assault by the Wehrmacht’s 45th Infantry Division for a total of nine days. The 33-year-old commander was wounded on the first day but remained in command of the mission defending the 333rd Regiment headquarters and the Terespol Gate until he was killed during a desperate counter-attack. Kizhevatov was awarded the Hero of the Soviet Union title 20 years after the end of the war.

On June 22, 1941, fifteen enemy attempts to cross the Prut and the Danube and seize a foothold on the Soviet territory were thwarted by the 79th Border Detachment deployed along the Romanian border. Precision fire of the border forces was reinforced by the artillery fire coming from Gen. Pyotr Tsirulnikov’s 51st Rifle Division.

On June 24, this division together with the border guards and the Danube Flotilla commanded by Capt. Lt. Ivan Kubyshkin crossed the Danube and took over a 70-km bridgehead on the Romanian territory which they controlled until July 19, when all the assault troops were ordered to return to the river’s east bank.

Сommandant of the first liberated town

The first town to be liberated from the Nazi invasion was Peremyshl (Przemysl in Polish) in Western Ukraine. It was attacked by the 101st Infantry Division which was part of Carl-Heinrich von Stuelpnagel’s 17th Army advancing on Lvov and Ternopol.

Heavy fighting erupted on June 22. Fighters of the Red Army’s Peremyshl Border Detachment defended the town for 10 hours before they were ordered to retreat. The staunch defense put up by these men won them some time until the 99th Rifle Division commanded by Col. Nikolay Dementyev arrived. The next morning the reinforcement, together with the border guards and troops of the local fortified area, launched an offensive driving the Nazis out. They controlled Peremyshl until June 27.

Sr. Lt. Grigory Polivoda, the 33-year-old commander of a border guards’ joint battalion and hero of this battle, was the first Red Army commander to clear a Soviet town of Nazi invaders. He was appointed the commandant of Peremyshl and died in battle on July 30, 1941.

The 12th Border Detachment of the NKVD Troops counting a total of 1190 men defended the USSR’s Baltic border from Cape Kolka to the town of Palanga. At 6:25 am on June 22, 1941, the avant-garde of the Nazi 291st Infantry Division attacked the 25th Border Outpost. Soviet frontier outpost troops left their positions and moved to Rucava where the 5th Commandant’s Service Headquarters and the 5th Reserve Outpost were stationed. In Rucava, platoons and companies were formed. By 1:30 pm on June 22, the combined border unit was ready for a defense operation near Rucava. At 3:30 pm, an enemy reconnaissance mission of 14 motorcyclists approached the border troops’ positions. They were allowed to come closer and then taken out. At 4:20 pm, a second recon mission appeared, this time counting 30 motorcyclists, who were also taken out. At 5:20 pm, a Nazi infantry battalion approached the Soviet defense positions. The border guards surprised the enemy with a sudden attack. Disoriented, the Nazis didn’t have time to reorganize into combat formations and retreated. A reserve border platoon struck them in the rear. In a fierce close-combat fight, the enemy force was destroyed. The Nazis lost over 250 fighters; 45 motorcycles, six mounted and 12 light machine guns. Many other weapons were seized by the Soviet troops. However, by 8:30 pm, the Germans came better prepared. An infantry battalion reinforced by an armored vehicle company smashed the Soviet defenses. The border guards retreated to the railway station in Pape and then, after a two-hour battle, to Nica. At 2:30 pm on June 23, some of the surviving fighters of the unit were attacked again, encircled and killed near Bernati.

The other survivors of the detachment including its commanders were surrounded in Libau together with the troops of the 67th Rifle Division’s 114th Rifle Regiment. On June 25, the border guards and the 114th Regiment undertook a failed attempt to break out. Only 165 border guards managed to survive the battle of Libau.

On June 22, 1941, the enemy launched multiple artillery attacks from the Romanian territory and then tried to secure border river crossings to the Soviet soil by seizing bridges and beachheads in order to continue the offensive. However, well-organized defense fire of the Soviet border guards put their plan on hold. The Soviet frontier outposts received supporting artillery fire and reinforcements from the Red Army’s covering forces. The avant-garde units of the German, Romanian and Hungarian troops suffered severe losses and were forced to retreat to their initial positions. The most intense fighting took place near the railway and highway bridges across the Prut. The Soviet defenders eventually destroyed the bridges to prevent the Nazis from seizing them.

On June 23rd through 25th, the fighters of the Izmail Border Detachment and a border guard unit of military ships in charge of the Danube coastal defense successfully landed an assault force in Romania. The maneuver was supported by the 51st Rifle Division. Following the initial success, the Military Council and Commander of the 9th Army Col.-Gen. Cherevichenko decided to go through with a major landing operation involving the capture of the Romanian town of Chilia Veche that hosted a number of enemy artillery batteries, which presented a major obstacle to the Soviet fleet activities on the Danube. The landing operation was commanded by Captain-Lieutenant of the Soviet naval border force Ivan Kubyshkin.

In the early hours of June 26, 1941, the Soviet Black Sea Fleet’s coast guard ships successfully delivered a joint amphibious assault force of the border guard detachment and the 51st Rifle Division’s 23rd Rifle Regiment that went on to attack the Romanian Army positions. The Romanians put up a fierce resistance. However, by 10 am, the Soviet landing party captured a 4 km by 3 km bridgehead after destroying a Romanian infantry battalion, a border outpost, and an artillery battalion. On June 27, the enemy kept attacking the Soviet assault force all day. Supported by the artillery fire from the coast guard ships, the Red Army troops on the mission repelled all the attacks. This maneuver allowed the Soviet command to get the military, cargo and passenger vessels that had been anchored on the Danube outside the enemy firing range and prevent them from being captured by the Romanians. On June 28, the landing force was ordered to return to the Soviet-controlled bank of the Danube.

In all the battles along the Soviet border in the first days of the war, not a single Soviet border outpost was left behind without a direct order from the Army Command. The fighters who ended up in the enemy rear went on to join the partisan movement and continue fighting.