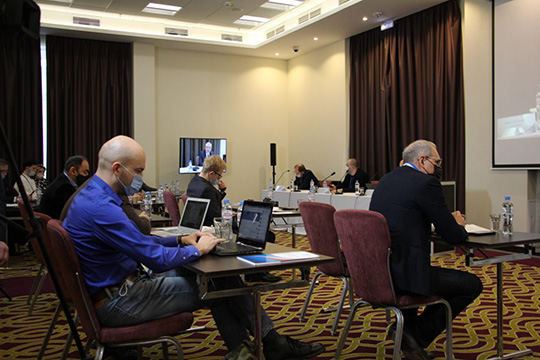 On November 24-26, Nizhny Novgorod plays host to the Third International Media Forum 2020: Freedom of Journalism in the Context of Human Rights, New Technologies and International Information Security. The event traditionally brings together leading Russian and foreign media experts, well-known journalists, politicians and political analysts. This year, discussions will focus on topics of concern to the international community of communications experts, with the participants to concentrate on the impact of the COVID-19 pandemic on the media market and information security.

The program of the Forum includes such hot-button issues as manipulation of consciousness amid a pandemic, how the dissemination of fake news can contribute to the emergence of crises and conflicts; observance of human rights in information activities in the context of modern-day threats and challenges, cooperation formats in the realm of international information security, development of a system of confidence-building measures in information and communication technologies (ICT), the media’s role in this process, etc.

More than 80 representatives from Russia, India, China, Pakistan, Belarus, France, the Netherlands, Switzerland, Austria and other countries have confirmed their participation in the Forum.

“This year, the world media community has been put to the colossal test of the pandemic. For some, it became a test of their financial strength; it forced others to completely reshape the formats of their work with their audience, and for others still it presented a very difficult moral and ethical choice,” Armen Oganesyan, Editor-in-Chief of International Affairs magazine and Chairman of the Media Forum’s Organizing Committee noted. “The media have become not just a source of information, but a technological partner for countries and citizens, and in the era of a pandemic, the responsibility of such a partner becomes vital," he added.

The Media Forum was first held in 2018 in Slovakia and immediately grabbed the attention of journalists in Russia, Europe and elsewhere in the world. The current political instability, ongoing information wars and a constant clash between the universally shared norms of human behavior and the changing principles of media work are adding additional relevance to the discussions taking place during this high-profile event. The Second Media Forum, held in November 2019 in Prague, became a truly global gathering bringing in participants from 30 countries. It was organized by Russia’s International Affairs journal, the independent platform Modern Diplomacy, and the Bulgarian magazine International Relations, and took place in the conference hall of the Grand Majestic Plaza, which is one of Prague’s most prestigious hotels.

When speaking at the Forum, Marius Lukosiunas, Program Specialist at the Section for Freedom of Expression and Communication and Information Sector of UNESCO, highlighted the main issues of concern to the international community: “When it comes to media independence, there is a tendency towards vulnerability as they are becoming increasingly dependent on government and corporate subsidies. In a number of regions, confidence in journalists is declining. On the other hand, we also see the media outlets’ increasing resistance to encroachments on their independence. In Central and Eastern Europe, we see a downward trend represented by a general decline in respect for media freedom and increased pressure using digital attacks on journalists, such as online harassment, insults, fabrication of criminal cases, etc."