“Third way”: EU tries to avoid a hard choice between US and China 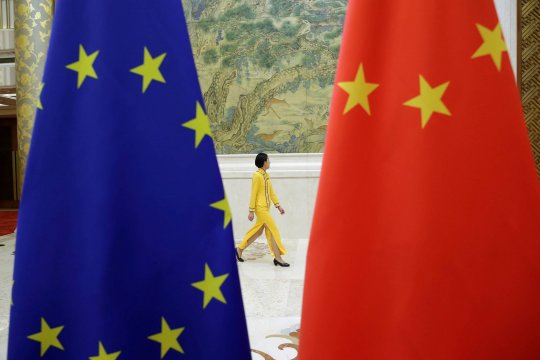 According to Euronews, the EU-China online summit of June 22 "was held in a tense atmosphere." The EU has toughened its position on trade negotiations with Beijing, but observers note that Brussels continues to stay clear of the ongoing trade war between the US and the People’s Republic. Meanwhile, just as President Trump talks about "breaking ties" with the Celestial Empire, the United States is pulling out of OECD-organized negotiations over an international tax on digital companies above a certain revenue threshold. US Trade Representative Robert Lighthizer is looking for legal grounds for imposing unilateral duties on the European countries willing to jack up taxes on US IT companies. The situation may well lead to a new trade war.

By the turn of this year, Europe had still been desperately trying to walk the fine line between Washington and Beijing and implement its own version of the game in a world where parties can always agree or nix almost any bilateral deal. When in Washington, the European Commission backed the US side in the conflict with China, while during a visit to Beijing its delegation showed "understanding" of China’s position in trade disputes with America. However, even then, the Old World’s stand on the intensifying tug-of-war for dominance between the world’s two leading powers looked both ambiguous and “dangerous.”

The US wants the Europeans to clearly and unambiguously honor their political and even legal obligations, threatening otherwise to completely dismantle the entire system of relations, which has for decades relieved Europeans of the need to make independent, albeit difficult and costly decisions. Trump's unilateralism has exacerbated the crisis in transatlantic relations to a degree that the concept of “Westlessness” took center stage at this year’s security conference in Munich. It was about the erosion of Western power to an extent that "the very concept of" the West "is now devoid of any strategic content." [i]

Meanwhile, China’s rapid economic, technological and political growth is forcing Europeans to decide whether they want to trade and exchange technologies with a possible future leader in many important areas of scientific and technological progress. And, ultimately, if the Old World is able to maintain its status of one of the most advanced socio-economic regions of the world.

Finally, while over the past few years the United States has become increasingly self-absorbed, Europe and China have been aligning their positions on global trade, including their rejection of Washington’s growing protectionism, and on climate change. Beijing has made it clear that in the event of a weakening of transatlantic ties, it is ready to immediately move in and fill the gap.

It is against this backcloth that towards the close of last year the number of European politicians holding out for Europe’s greater strategic autonomy from the United States reached a historic maximum. Optimists see the future of the European Union as a “counterweight” to the United States, should the latter “cross the line.” The new leadership of the European Commission has proposed the creation of a full-fledged European “center of power” to interact with the rest of the world, the US included, but with an emphasis on rational political interests.

At the same time, the Europeans are wary of the increasing centralization of political power in China under Xi Jinping, the state’s growing role in the economy and Beijing’s increasingly "assertive" foreign policy. By the end of 2019, the EU had gradually tightened control over Chinese investments, especially in the high-tech sector and infrastructure, but described all this as “regrettable but necessary measures” designed to create a new political platform for the development of closer ties.

However, in a matter of just a few weeks the coronacrisis forced the EU to start reconsidering its strategic worldview. First, the pandemic called into question the efficiency of supranational institutions as such - both in terms of legitimacy and the resources they are able to use to combat the challenge of catastrophic proportions. Amid the ongoing COVID-19 crisis, the "failure of the US global hegemony" has become "painfully obvious." Finally, even before the pandemic struck, Britain’s withdrawal had deprived the EU of much of its “strategic weight.”

As for relations with China, Mark Leonard, Director of the European Council on Foreign Relations, said that the EU now sees Beijing’s strong desire to use its position as a leading producer of medicines and medical equipment as a means of increasing its political leverage. “The COVID-19 crisis has triggered a new debate within Europe about the need for greater supply-chain ‘diversification,’ and thus for a managed disengagement from China.”

That being said, right now the EU’s dependence on China “in strategically important areas” has actually increased. Diversifying sources of supply will not be easy. Experts argue that it would be crazy for a business to leave China, especially when it produces goods that are extremely important for the Europeans, such as pharmaceuticals and medical equipment. They also warn that producing all this in Europe and procuring in other countries, would cost more. [iii]

On the other hand, the outbreak of the epidemic has created preconditions for a new rapprochement between the United States and Europe. Still, the outbreak of the coronavirus infection on both sides of the Atlantic has been strong enough to force nominal allies to fight each other for resources. It is “every man for himself” now. The situation with the pandemic and its socio-economic impact on the United States is so bad that it is now undermining Donald Trump’s chances for reelection in November, forcing him to look for ever new ways to appease and rally his voters, even at the cost of slapping new tariffs on America’s closest allies. Bloomberg reports that in response, “Germany is preparing to strike back against the US if President Donald Trump follows through on his threat to kill off the Nord Stream 2 gas pipeline with additional sanctions.”

Strategically speaking, however, the EU and the US continue to have shared concerns in their confrontation with Beijing, including alleged theft of intellectual property, “forcing” private Western companies to transfer technology, industrial subsidies and violations of market rules by China’s state-owned firms. Speaking at a June 25 online conference, organized by the German Marshall Fund, US Secretary of State Mike Pompeo said that Washington had accepted a proposal by European Union foreign policy chief Josep Borrell to create a US-EU dialogue on China to discuss "the concerns we have about the threat China poses to the West and our shared democratic ideals."

In a recent interview with Euronews, NATO Secretary General Jens Stoltenberg said that "... China is coming closer to us with weapons systems ... the rise of China makes it even more important to maintain the bond between North America and Europe, the transatlantic bond." [iv]

The EU remains formally committed to developing a “strategically- oriented foreign policy” that would give it “a sense of initiative and action.”

“We grew up in the certain knowledge that the United States wanted to be a world power," German chancellor Angela Merkel told parliament in June. "Should the US now wish to withdraw from that role of its own free will, we would have to reflect on that very deeply," she added. [v] French President Emmanuel Macron urges Europe to act more independently in world affairs in order to completely get rid of the need to choose between America and China. This is exactly what the EU’s top diplomat Borrell has in mind when he speaks about a “third way.”

Still, what has been discussed so far is at best preparation of documents to serve as a “strategic compass” for coordinating government measures. [vi]

Systematic inability to reach political and procedural consensus on many pressing international issues is the Achilles heel of EU foreign policy. The past few years have seen a rapid decline in the overall level of public confidence in traditional European elites, which has inevitably weakened the potential of political leadership across the EU. Besides, the growing sense of uncertainty among the leaders of individual EU countries is by no means adding to the unity of the 27-member bloc either.

On the one hand, the pandemic has “allowed Europeans to become less naive and more united in the face of Beijing, which supposedly tries to set them apart.” [vii] On the other hand, in its relations with the United States, Europe has found itself in a situation where it will have to try hard to make sure that America does not lose interest in continuing any “special” relations with Europe. Overall, the EU’s internal weakness and fragmentation, exacerbated by the current coronavirus pandemic, threatens to push the “united Europe” to the periphery of world politics.

According to most forecasts, tensions between the US and China are set to grow. Moreover, the old bloc system is actually a thing of the past now. The EU’s position will be determined by the severity of the humanitarian, financial and economic impact of the epidemic. It will also depend on whether the “soft power” of Europe is not accompanied by a “hard” one. The EU’s foreign policy has to maneuver between a mix of unenviable geopolitical roles of serving as a “buffer zone” in the new Cold War between China and the US, and of someone who has “dropped out of history” due to the loss of “identity and philosophy.” Europe will not be able to return to the “table of the great powers” unless it finds answers to these questions and avoids ending up their prey.