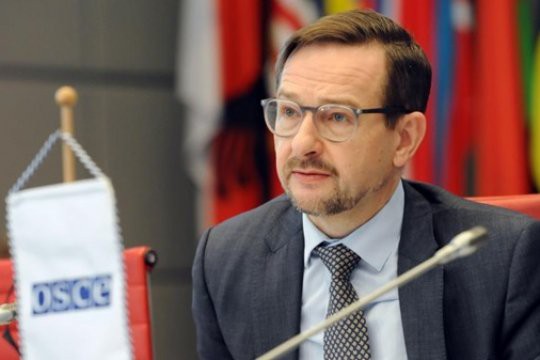 The principles of multilateralism are particularly useful when they are neglected. Former OSCE Secretary General (2017-2020) Thomas Greminger said as much during the presentation of the book “Multilateralism in Transition: Challenges and Opportunities for the OSCE,” that he had written jointly with the Geneva Center for Security Policy (GCSP).

In the book, Thomas Greminger sums up the results of his decade-long work in the organization’s structures and draws attention to the challenges that it is facing today.

Thomas Greminger noted that during his work on the book and his professional activities he had proceeded from the fact that the OSCE member states are interested in promoting reforms. He admitted, however, that in reality too much effort is still being spent on routine tasks, such as approving the organization’s agenda and budget, as well as on personnel issues at the expense of dealing with transnational challenges, listed below. According to him, the sluggish pace of organizational reforms is due to the fact, that the participating countries mix them up, thus making them dependent on less significant issues.

Among the transnational challenges facing the OSCE, Thomas Greminger singled out skepticism towards multilateral institutions, prioritizing norms-based multilateral approaches, while sidelining unilateral ones, polarizing the main participants in Euro-Atlantic and Eurasian security, drawing a line between Russia and the West, increasing the risk of accidental incidents at sea, in air and on the ground, rapid erosion of arms control mechanisms, terrorism and extremism, cyber threats, illegal trafficking in people, weapons and cultural objects, irregular migration, climate change and technological challenges, above all those pertaining to artificial intelligence. He also listed the dilemmas dogging the organization’s everyday work, such as the people’s right to self-determination and territorial integrity; non-interference in the internal affairs of other states, and human rights concerns; indivisibility of security and the right of each country to solve its security problems independently.

"We need to accept the principle of cooperative security because modern-day challenges can only be overcome by joint efforts." (Thomas Greminger)

“These days, the OSCE is needed more than ever before, but platforms for a dialogue are used exclusively as instruments of public diplomacy and statements are made with domestic policy interests in mind, instead of looking for solutions of real problems,” the ex-OSCE Secretary General said. He also noted that multilateral cooperation is being thrown into question and the room for dialogue is shrinking while the real-life situation requires ever-deeper cooperation and dialogue. This state of affairs in international relations naturally reflects on the atmosphere within the OSCE, Thomas Greminger noted.

“The OSCE must maintain its role as an inclusive area for dialogue.” (Thomas Greminger)

That being said, Thomas Greminger still claims that he managed to implement a number of reforms aimed at streamlining the OSCE’s work, and hopes that the budgetary and personnel reforms will be carried through. The former OSCE Secretary General mentioned the equality of men and women in leadership positions achieved during his presidency, as well as the consistent effort to root out harassment and sexual violence in the workplace. He also highlighted the OSCE’s growing partnership with the European Union and the UN and the establishment of ties with the EAEU, SCO, CIS and CSTO. He mentioned the efforts to settle the conflict in southeastern Ukraine as one of his disappointments though.

“The flare-up of the conflict in Ukraine this fall laid bare the limits of the OSCE's capabilities. If countries are unwilling to move forward in resolving the conflict, it will continue to grow. If at least one side opts for an escalation of violence, the OSCE has no chance of stopping the conflict,” the former OSCE head concluded.