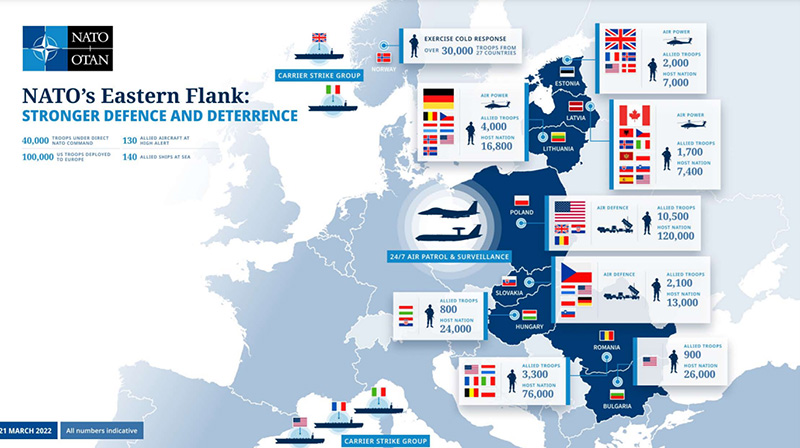 The persistent deployments of NATO troops and weapons to countries along Russia’s flank is a strategy Western military leaders call “the porcupine defense”. It seeks to make the idea of invasion unpalatable to adversarial war planners by demonstrating NATO troops can instantly mobilize and back up allies already toughened by Western training and equipment, reveals “The Washington Post” in an article “U.S. allies most vulnerable to Russia press for more troops, weapons”. About 100,000 U.S. troops are deployed across Europe, with a growing center of gravity in the East, but for those on Russia’s doorstep, it’s not yet enough, claims the WP.

As the United States and NATO inject personnel and equipment into Eastern Europe, vulnerable allies such as Latvia are scrambling to scale up their defenses for fear they will be next to come under attack…

Even more vital, Baltic and Eastern European officials say, is a turbocharging of defense production lines to accelerate fulfillment of long-standing orders for weapons that these front-line countries say they require…

The United States is looking for the Baltic countries to build training ranges and other military infrastructure, a Pentagon official says, while noting that U.S. security assistance for the region has risen to $180 million this year.

Polish officials believe it would greatly help their own defense posture if the United States could accelerate delivery of certain weapons Warsaw has already been promised.

A columnist of the “Strategic Culture Foundation” – Russia think-tank – writes: “Our hypothesis about the three advanced echelons of the NATO-Western front against Russia, expressed in the June article (in Russian) "Three echelons of geopolitical suicide bombers", are confirmed”.

First echelon – Ukraine: Implementation time is now. The task is to wage war with the Russian Federation until the complete exhaustion of all the resources of this territory. The goal is the maximum possible military-political weakening of Russia.

Second tier – Eastern Europe led by Poland: Implementation time – simultaneously with the disposal of Ukraine, but after a certain weakening of Russia. This echelon is also incapable of a final solution of the "Russian question" and will inevitably be ground down within a quite foreseeable period.

Third echelon – Europe in general (EU): The overarching task of the first two echelons is to gain maximum time to prepare for the strategic deployment and for the psychological mobilization of the "European giants" - Germany, France, Italy. All these countries are currently at the lowest level of military-psychological readiness for a major European war, and it takes time (from one to three years) for their sufficient political consolidation and military-industrial mobilization. This time will be as short as possible. Including in the most painful ways, up to cutting off Europe from Russian energy sources and inciting the wildest and most aggressive Russophobia on this basis. What's already happening.

The current media turmoil in the West on this issue is also caused by a discrepancy in Western strategic planning. The exhaustion of the capabilities of the first echelon (Ukraine) is not synchronized with the moment of bringing the second (Eastern Europe) and third (Western Europe) echelons to full combat readiness.

These echelons will not be able to obtain a sufficient number of weapons for their full combat deployment without transferring the entire Western and, above all, the American military-industrial complex to a military footing, - notes the columnist of the Strategic Culture Foundation.